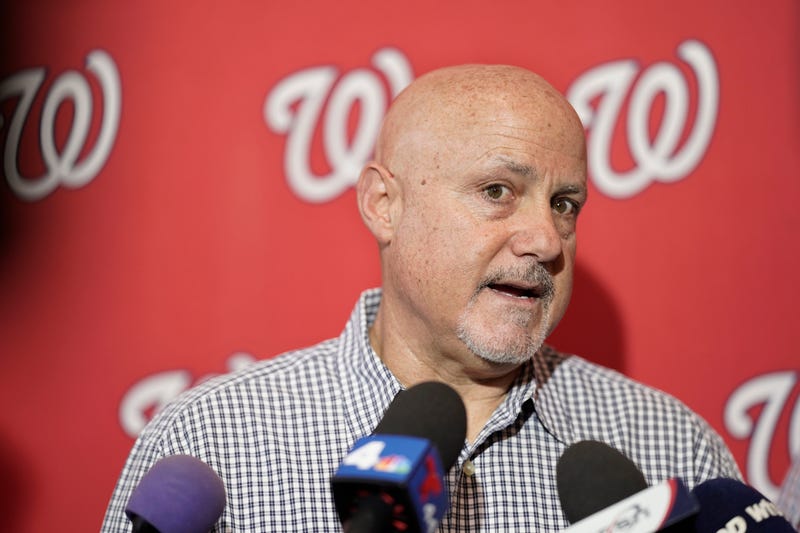 Manager Dave Martinez hopes he is next up.

The 59-year-old Rizzo, who also holds the title of president of baseball operations, built the team that won the 2019 World Series championship. The Nationals have won four NL East titles, most recently in 2017. They won the last season's World Series after making the playoffs as a wild card.

Rizzo's contract was set to expire at the end of this season. Martinez said his boss earned his new deal.

“He deserves it,” Martinez said. "He built this organization and good for him.

“He gets more years to build this up again and do it again.”

This year, the Nationals are in last place in the division in the pandemic-shortened season, but the 2020 struggles have not affected Nationals owner Mark Lerner's confidence in Rizzo.

“We are thrilled that Mike will continue to lead our club,” Lerner said in a statement released by the team.

"He guided us through the early years of building this franchise into what it is today — a perennial contender that brought a World Series championship home to Washington, D.C., last season. I look forward to continuing our strong working relationship for years to come.”

Martinez is in the final year of a three-year contract that includes a club option for 2021. So far, there has been no announcement from the team about next season and beyond.

“Mike's is done. Mine should be coming around the corner pretty soon,” Martinez said. “We’ll see what happens.”

Martinez insisted he doesn't worry about his contract status.

“For me I never really think about it, honestly,” Martinez said. “I know they’re going to do the right thing. I do believe that. I have a good relationship with the Lerner family. They know how I feel about being here and I don’t want to go anywhere else.”

Added Martinez: “Today is about Mike. ... I owe him a lot. He’s the first guy to give me a chance to manage in the big leagues and we won a championship together.”

Rizzo is in his 12th season guiding the Nationals' baseball operations. He has the fourth-longest active tenure of any general manager in the majors.

Rizzo took over Washington's baseball operations in 2009. With Rizzo guiding the direction of the team, the Nationals are 951–867 — the seventh-best record in the majors in that span. Since 2012, the Nationals have baseball's third-best record at 743–590, trailing the Dodgers and Yankees.

Rizzo joined the team in 2006 as assistant general manager.

On the same day the Nationals renewed their commitment to Rizzo, the team recalled top prospect Carter Kieboom from its alternate training site to start at third base.

Kieboom, a first-round pick in 2016, was hitting only .200 with no homers when he was optioned to the team's alternate training site in Fredericksburg, Virginia, on Aug. 26. Kieboom, 23, was recalled after spending the minimum 10 days at the site.

Kieboom was in the starting lineup at Atlanta on Saturday night. Martinez said third base will belong to the rookie the remainder of the season.

“He’s going to play third base the rest of the year,” Martinez said. “We’ve got to see what he can do. It’s a perfect opportunity for him to go out there and play every day.”