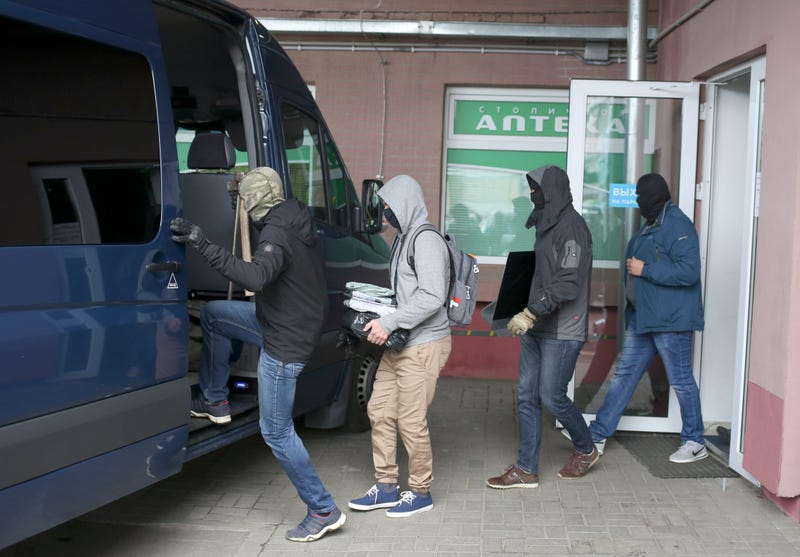 Photo credit Authorities carry documents and computers out of the opposition Coordination Council office after a search raid in Minsk, Belarus, Wednesday Sept. 9, 2020. Belarusian authorities on Wednesday detained one of the last leading members of an opposition council who remained free, moving methodically to end a month of protests against authoritarian President Alexander Lukashenko. (AP Photo/TUT.by)
By The Associated Press

KYIV, Ukraine (AP) — Belarusian authorities on Wednesday detained one of the two last leading members of an opposition council who remained free, moving methodically to end a month of protests against authoritarian President Alexander Lukashenko.

Lawyer Maxim Znak, a member of the Coordination Council created by the opposition to facilitate talks with the country's leader of 26 years on a transition of power, was taken out of the council's office by unidentified masked people, associate Gleb German said.

Znak only had time to text message “masks” before they took the phone away from him. German said.

Unidentified people also attempted Wednesday to enter the apartment of writer Svetlana Alexievich, the winner of the 2015 Nobel Prize in literature and now the only member of the council's executive presidium still free in Belarus.

Diplomats from several European Union nations and journalists converged on Alexievich's apartment in the Belarusian capital, Minsk, to try to prevent her detention.

The rising pressure on activists comes as Belarus marks a month of massive demonstrations protesting Lukashenko's reelection to a sixth term in the Aug. 9 vote, which the opposition rejects as rigged. The protests that drew up to 200,000 on Sundays cast an unprecedented challenge to the Belarusian leader's iron-fist rule.

The foreign ministers of the Nordic Baltic nations, meeting in Estonia on Wednesday, urged Belarusian authorities to end a police crackdown on post-election protests and the prosecution of activists.

Swedish Foreign Minister Ann Linde voiced deep concern over the crackdown on protesters and the detentions and forcible expulsions of opposition activists.

"We demand the immediate release of all those detained on political grounds before and after the falsified presidential election,” she said after the meeting.

Lithuanian Foreign Minister Linas Linkevicius said the members of the opposition council only want to allow the people of Belarus to “choose their future themselves. That’s the least they are asking, and the least they deserved.”

Last month, Nobel laureate Alexievich was questioned by Belarusian investigators, who have opened a criminal investigation into members of the Coordination Council, accusing them of undermining national security by calling for a transfer of power. Several council members were arrested and others were forcibly expelled from the country.

Alexievich dismissed the official accusations, saying in a statement released Wednesday that the council was seeking to defuse the crisis sparked by Lukashenko's reelection to a sixth term by offering to foster a dialogue between authorities and protesters.

“We weren't preparing a coup, we were trying to prevent a split in our country,” Alexievich said.

She warned that the arrests of opposition activists will not end protests.

“They have stolen our country and now they are trying to abduct the best of us,” Alexievich said. “But hundreds of others will come to replace those who have been taken away from our ranks. It wasn't the Coordination Council that rebelled, it was the entire country that raised.”

Speaking to reporters from her apartment, she said she doesn't plan to leave the country despite the official pressure.

“This is terror against our own people,” she said.

Maria Kolesnikova, a leading member of the council, was detained Monday in the capital of Minsk along with two other council members and then driven early Tuesday to the border, where authorities told them to cross into Ukraine.

When they arrived in a no-man’s land between the countries, Kolesnikova ripped her passport into small pieces to make it impossible for the authorities to expel her. Kolesnikova was put into custody on the Belarusian side of the border, and her father said investigators called him Wednesday to say that she was moved to a jail in Minsk on charges of plotting to seize power.

Her lawyer, Ilya Salei, was also detained Wednesday, and Kolesnikova's apartment was raided by authorities.

Lukashenko has dismissed the opposition as Western stooges and rejected demands from the U.S. and the European Union to engage in a dialogue with protesters who see his reelection as rigged and are demanding his resignation.

After a brutal police crackdown in the initial days after the vote stoked international outrage and swelled the ranks of protesters, authorities in Belarus have switched to threats and selective arrests of activists and demonstrators to stamp out the unrest.

Police dispersed a few hundred demonstrators rallying in Minsk late Tuesday in solidarity with Kolesnikova and detained scores. The Interior Ministry said Wednesday that 121 people were detained in Minsk and other cities the previous day for taking part in unsanctioned demonstrations.

The United States and the European Union criticized the Belarusian vote as neither free nor fair and demanded an end to the crackdown on protests.

U.S. Secretary of State Mike Pompeo issued a statement expressing concern about the attempt to expel Kolesnikova and warning that the United States and its allies are considering sanctions against Belarus.

“Poland is an open home for all Belarusians who need help,” Morawiecki said.