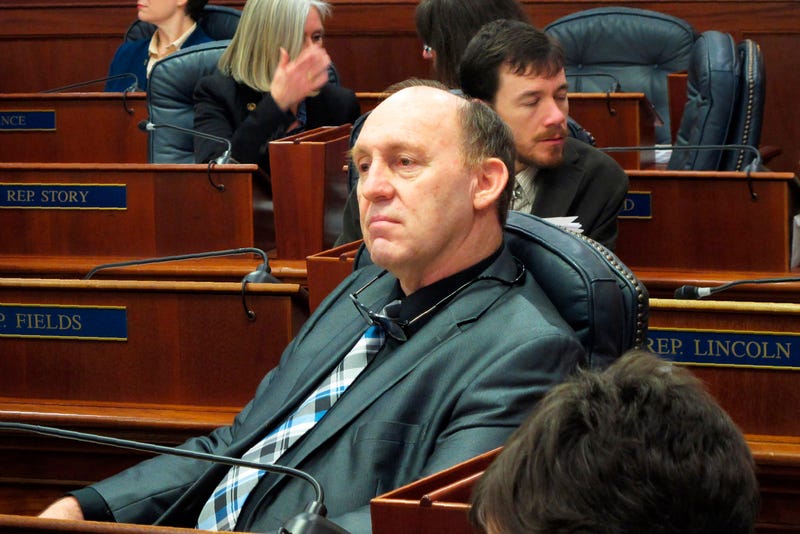 Photo credit FILE - In this Feb. 12, 2018, file photo, Alaska state Rep. Gary Knopp waits during a break in a floor session in which the House failed to elect a permanent speaker in Juneau, Alaska. Knopp, who was involved in a July mid-air collision that killed seven people, was piloting his plane even though his medical flight certification was denied eight years ago because of vision problems, the National Transportation Safety Board reported Tuesday, Aug. 25, 2020. . (AP Photo/Becky Bohrer, File)
By The Associated Press

An Alaska state lawmaker who was involved in a July midair collision that killed seven people was piloting his plane even though his medical flight certification was denied eight years ago because of vision problems, a federal agency reported Tuesday.

Alaska State Troopers identified the pilot as state Rep. Gary Knopp, 67, of Kenai, who was flying a Piper PA-12 when it collided with a de Havilland DHC2 shortly after both planes had taken off in the area of Soldotna, Alaska, on the evening of July 31.

Both airplanes crashed, killing Knopp, the other pilot and five passengers who were being flown to a remote lake for a fishing trip. The de Havilland was flown by a local pilot and carried a guide from Kansas and four people from South Carolina.

The National Transportation Safety Board, in a preliminary report on the crash issued Tuesday, wrote that a witness to the crash told investigators the northbound Piper hit the westbound de Havilland on the left side of the fuselage toward the back of the aircraft.

The unidentified male witness said he saw what he believed was the de Havilland's left wing separate from the aircraft, and the airplane went into an uncontrolled spin toward the ground, the report said. Investigators found dark green paint from the Piper on the rear fuselage of the de Havilland, according to the report.

The crash occurred around 8:30 a.m. at about 1,175 feet with clear skies up to 8,500 feet, the report stated. The de Havilland, which was equipped with floats to land on water, took off from a nearby lake about the same time as Knopp's plane left the Soldotna Airport.

The NTSB wrote that information on file with the Federal Aviation Administration's Civil Aeromedical Institute showed that Knopp was denied medical certification in June of 2012 by the Alaska Regional Flight Surgeon because of vision problems. The denial was appealed and upheld a month later.

Knopp’s plane also had an invalid registration number, the NTSB said. The plane had a valid number that was registered to Knopp, but a different number was on the plane's exterior. That number had been reserved by Knopp but was not valid, the report said.

Troopers said six of the seven people were pronounced deceased at the scene of the accident. The seventh person died while being transported to a hospital.

Bell was one of the owners of High Adventure Air Charter in Soldotna, which offers bear viewing adventures, fishing and hunting trips and glacier tours, according to its website.

The two planes collided about 2 miles northeast of the Soldotna Airport, the FAA statement said after crash.

The FAA sent two investigators to the crash site, which is about 150 miles (241 kilometres) southwest of Anchorage.

Knopp, a Republican, left the House GOP caucus and served in a coalition of Democrats, independents and GOP lawmakers that comprised the House Majority. That left the remaining House Republicans in the minority.

Knopp was first elected to the state House in 2016. He served for years before that on the Kenai Peninsula Borough Assembly.

He was born in Whitefish, Montana, and moved to Alaska in 1979. He eventually settled in Kenai and worked as a general contractor.

His hobbies included flying, diving, hunting, golfing “and enjoying life in general at home on the Peninsula,” according to his legislative biography.