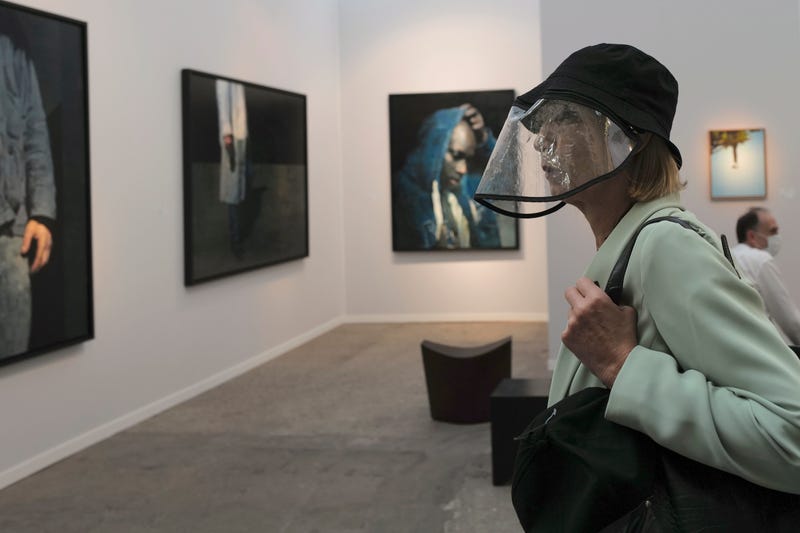 Photo credit A visitor, wearing a protective face mask as a precaution against the coronavirus, looks on during the private view of Art Paris at the Grand Palais in Paris, Wednesday Sept. 9, 2020. Fears and restrictions over the coronavirus have caused the cancellation of all of 2020's premiere global art fairs, such as Art Basel, Frieze London, and Art Basel in Miami Beach, stymieing the main commercial artery of the multi-million-dollar industry.But organizers of Art Paris, France's second biggest contemporary art fair, have thrown caution to the wind, and are opening their doors to thousands of visitors from Thursday in the Grand Palais for a four-day show. (AP Photo/Francois Mori)
By The Associated Press

PARIS (AP) — The coronavirus pandemic has led to the cancellation of this year's premiere global art fairs since March, stymieing the main commercial artery of the multibillion-dollar industry.

But Art Paris, which is France's second-biggest contemporary art fair, is opening its doors to thousands of visitors from Thursday in the Grand Palais. The four-day show is going ahead despite a spike in COVID-19 infections in the country.

Art Paris is the first big international art fair to physically go ahead since the coronavirus swept through the world, grounding flights, triggering lockdowns and devastating commerce.

In 2019, before the coronavirus pandemic struck, the global art market was valued at around $64 billion.

“We had this conviction that we had to do this fair because it’s so important for the galleries to meet their collectors, you know, after six months of total inactivity. And, you know, everything was shut down, so it’s really essential,” Art Paris General Curator Guillaume Piens told The Associated Press.

Organizers acknowledge there’s a “risk,” and say a health team is on-site to evacuate any potential COVID-19 clusters from the galleries. But they hope that proceedings won'tt be marred by any fair-linked infections.

“The space of the Grand Palais is majestic just so it’s not seen as a confined space. It (has) more than a 45-meter-high ceiling,” Piens said.

Nonetheless, amid fears of a second wave, members of the French public have expressed dismay that such a big fair is going ahead.

“Really? I don’t think that is very prudent to have so many people together, spreading germs and bacteria. Couldn’t they just cancel it this year like everyone else?” said Karelle Dublot, a 26-year-old teacher, who was walking in the street nearby.

Art Paris was originally scheduled for April, but it was decided that a Sept. 10-13 slot would be a better fit.

About 6,000 masked guests are set to attend the Paris fair’s staggered opening — down from 17,000 invitees from last year. Guests this year won't only pass sellers from 112 galleries, 15 different countries and their art, but ubiquitous bottles of hand sanitizer, and warning signs that clusters of people in small spaces won't be permitted. Some art gallery owners and operators are wearing sparkling, art-infused masks to try to create some levity despite the restrictions.

Many of this year’s art fair cancellations, including the May edition of Frieze New York, followed the premature closure of Tefaf Maastricht in March, after an exhibitor at the Dutch fair contracted the virus on March 9. It was later revealed that at least two-dozen exhibitors and visitors had also contracted the virus. Fairs such as Art Basel in Switzerland, Frieze London, and Art Basel in Miami Beach were also among victims of the pandemic.

“There have been no big art fairs anywhere in the world since March. Art Paris is a first. I’m quite happy it’s happening, despite the crisis, as people in the industry are just desperate,” said Ian Rosenfeld of London-based Gallery Rosenfeld.

Despite the risks of showing, many in the art industry say that there’s no other option but to start up again, including Ellen van Heijningen, from Athens-based P Gallery, who said the fair was “a very good idea.”

“They’ve taken measures. There’s a lot of space ... we can’t kind of keep life on hold forever,” she said.

Others were more hyperbolic.

“It’s a sort of a life and death situation for galleries, for artists, for businesses,” said Hélianthe Bourdeaux-Maurin, H Gallery director, who is exhibiting at the fair.

COVID-19-related restrictions on travel and congregation have made going to many fairs impossible — especially for jet-setting art collectors who regularly fly thousands of miles to buy art.

“Billions of dollars, euros — every kind of money — has been lost all over the world ... It’s very important that art fairs are taking place because right now nobody can take a plane. The galleries cannot meet their collectors. It’s very hard to find supporters when you cannot travel. So it’s really wonderful that we can all meet in one place and try to keep the industry going,” Bourdeaux-Maurin said.

Many smaller galleries are particularly vulnerable and many are known to be facing bankruptcy and closure.

Art Paris has acknowledged this is a real problem by creating an initiative to help all their younger galleries. The fair has pledged that the totality of the ticket sales profit from this year’s edition will be given to their youngest galleries to help them weather the storm. Bourdeaux-Maurin, who will be among recipients, described the move as “unprecedented.”