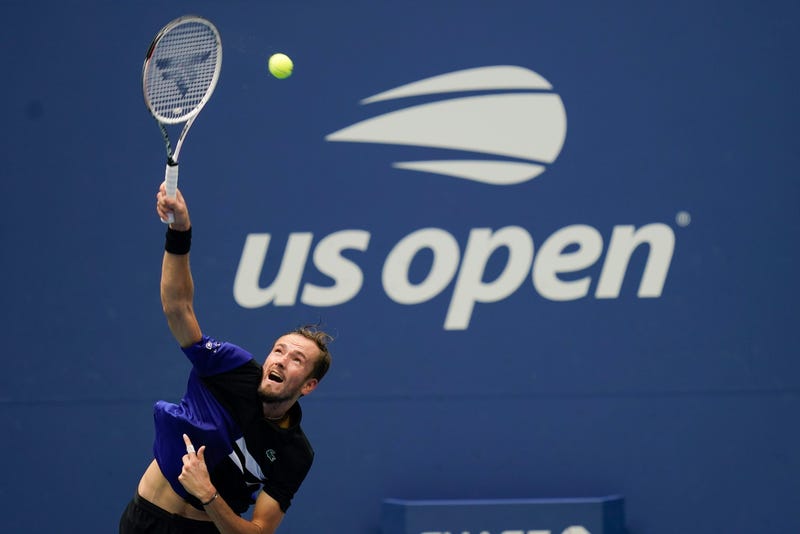 Photo credit Daniil Medvedev, of Russia, serves to Andrey Rublev, of Russia, during the quarterfinals of the US Open tennis championships, Wednesday, Sept. 9, 2020, in New York. (AP Photo/Seth Wenig)
By The Associated Press

Daniil Medvedev, the 2019 U.S. Open runner-up, is back in the semifinals at Flushing Meadows for the second year in a row.

Medvedev has not dropped a set in the tournament so far and never faced a break point against No. 10 seed Rublev.

Medvedev also produced more than twice as many winners, 51-23.

He took a medical timeout in the third set to have a trainer massage his shoulder but held on.

A year after losing to Rafael Nadal in a nearly five-hour U.S. Open final, Medvedev will face No. 2 Dominic Thiem or No. 21 Alex de Minaur in Friday’s semifinals.

The other men’s semifinal will be No. 5 Alexander Zverev vs. No. 20 Pablo Carreño Busta.

None of the remaining men has won a Grand Slam title.

Nicole Melichar of the United States and Xu Yifan of China have reached the women’s doubles final at the U.S. Open.

They beat the American duo of Asia Muhammad and Taylor Townsend 6-4, 3-6, 7-6 (7) in the semifinals Wednesday.

Neither Melichar nor Xu has won a Grand Slam title in women’s doubles. Melichar did team with Alexander Peya to win the mixed doubles trophy at Wimbledon in 2018, while Xu and Gabriela Dabrowski were the runners-up in women’s doubles at the All England Club last year.

In Friday’s final at Flushing Meadows, the third-seeded pair of Melichar and Xu will face the unseeded team of Laura Siegemund of Germany and Vera Zvonareva of Russia.

Siegemund and Zvonareva advanced Tuesday with a three-set victory over Anna Blinkova and Veronika Kudermetova.

In the U.S. Open men’s doubles final Thursday, the eighth-seeded pairing of Wesley Koolhof of the Netherlands and Nikola Mektic of Croatia will face Mate Pavic of Croatia and Bruno Soares of Brazil.

Serena Williams has pulled out another three-setter to reach the semifinals in an 11th consecutive U.S. Open appearance.

Williams trailed by a set and a break against Tsvetana Pironkova before coming back to win 4-6, 6-3, 6-2 Wednesday in Arthur Ashe Stadium.

Two more victories for Williams, and she will claim a record-tying 24th Grand Slam singles title.

How big an upset would this have been if Pironkova had held on? Not only is she not seeded at Flushing Meadows, she isn’t even ranked. This was her first tournament of any sort in more than three years, because she left the tour to become a mother.

Williams last lost before the semifinals in New York all the way back in 2007, when Justine Henin eliminated her in the quarterfinals.

The American, who turns 39 in less than three weeks, has won a total of six championships at the U.S. Open and was the runner-up four times, including in 2018 and 2019.

Serena Williams has pushed her U.S. Open quarterfinal against Tsvetana Pironkova to a third set.

Pironkova took the opening set 6-4, then went up a quick break at 1-0 in the second.

But Williams broke back right away, then again to lead 5-3 by taking a 24-stroke exchange, and served out that set at 6-3.

Williams is seeded No. 3 and seeking her record-tying 24th Grand Slam singles title.

Pironkova not only isn't seeded, she isn't even ranked at all, because this is her first tournament at any level in more than three years. She took time away from the tour to become a mother.

Serena Williams has dropped the first set of her U.S. Open quarterfinal against unseeded Tsvetana Pironkova by a 6-4 score.

Pironkova is playing in her first tournament in more than three years after taking time off to become a mother.

She broke Williams to lead 3-2, then failed to convert two set points while Williams served at 5-3.

But Pironkova served it out in the next game. She won 20 of the 25 points she served in that set.

Serena Williams is about to start her U.S. Open quarterfinal against unseeded Tsvetana Pironkova.

Pironkova is a 32-year-old from Bulgaria who is playing in her first tournament since she took a break of more than three years while having a son.

The other women's quarterfinal on Wednesday's schedule is No. 16 seed Elise Mertens against unseeded Victoria Azarenka, who has a nine-match winning streak.

The men's quarterfinals Wednesday are No. 2 seed Dominic Thiem against No. 21 Alex de Minaur and No. 3 Daniil Medvedev against No. 10 Andrey Rublev in an all-Russian matchup.

Medvedev was the runner-up in New York last year.