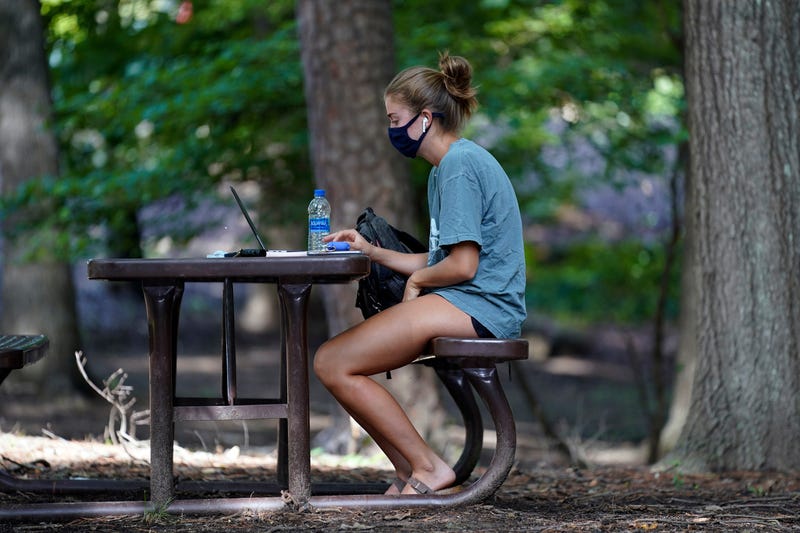 Photo credit FILE - In this Aug. 18, 2020, file photo, a student works outside Ehrighaus dormitory on campus at the University of North Carolina in Chapel Hill, N.C. As more and more schools and businesses around the country get the OK to reopen, some college towns are moving in the opposite direction because of too much partying and too many COVID-19 infections among students. (AP Photo/Gerry Broome, File)
By The Associated Press

RALEIGH, N.C. -- At least 1,000 East Carolina University students have tested positive for the coronavirus since fall classes began on Aug. 10, according to the college’s COVID-19 case count.

— Retiree in Austria gets U.S. virus relief check, lived there 2 years in 1960s

— The British government facing pressure to act fast to keep a lid on coronavirus infections after a sharp spike in new cases across the U.K.

— Africa’s tourism sector is struggling to cope with the drop in international travel caused by the COVID-19 pandemic.

TALLAHASSEE, Fla. — Florida State University in Tallahassee reported that in the seven-day period ending Sept. 4, 3,429 tests were performed at a local civic center and 724 individuals tested positive for a positivity rate of 21.1%. Overall 839 students and 14 employees have tested positive since Aug. 2.

The spike comes after several social media posts showing photos and videos of off-campus student parties with no social distancing and few, if any, masks.

The university emailed a statement saying that the “administrators are disappointed to see the public health guidance provided on multiple occasions has been disregarded by many.”

The statement continued: “FSU is again requesting local establishments and apartment complexes step in with appropriate restrictions where off-campus students are congregating.”

The university, which has almost 44,000 enrolled students, responded to the increase by prohibiting tailgating at Saturday’s football game, telling fraternities and sororities they can’t have non-member guests and reducing the size and number of student events. Florida State plans to begin random coronavirus testing next week.

By comparison, the University of Florida in Gainesville, which had more than 56,500 students enrolled last year, has been reporting test results since May 6. As of Tuesday, 338 students and 28 employees have tested positive. But of the 1,253 students tested at the campus health center, 272 tested positive for a positivity rate of 21.7%

LAS VEGAS — Health officials said Tuesday that eight Las Vegas-area children under age 14 who tested positive for COVID-19 since March were also diagnosed with a rare inflammatory condition linked with the coronavirus.

The Southern Nevada Health District said all the children were hospitalized and released, and the district has begun adding daily tallies of confirmed cases of the illness to its daily online coronavirus response report.

Not all children exhibit the same symptoms, and the district said that while there isn’t a known cause, many children with the illness had COVID-19 or had close contact with someone who did.

Researchers say the illness can cause inflammation of the multiple internal organs.

The Health District reported 61,543 cases of COVID-19 in and around Las Vegas, an increase of 67 cases since Monday, and a total of 1,206 deaths since March. Officials say new case rates have decreased in the past two weeks.

State health officials reported no new deaths and 137 new confirmed cases of COVID-19 statewide on Tuesday. At least 1,393 people have died with the illness since the first case was reported in Nevada on March 5.

BOSTON — State officials in Massachusetts said a Boston-based coronavirus testing lab that counts dozens of nursing homes among its clients has been suspended by the state after it returned nearly 400 false positive tests.

The Massachusetts Department of Public Health said in a statement Tuesday that it opened an investigation in early August after it became aware of an unusually high positive rate of COVID-19 tests reported by Orig3n Laboratory.

Retests found at least 383 false positives that were actually negative.

The state late last month notified Orig3n of “three significant certification deficiencies that put patients at immediate risk of harm,” including failure of the lab’s director to provide overall management and a failure to document the daily sanitizing of equipment used for coronavirus testing.

The department said the state issued the genetics lab a statement of deficiency last Friday, and the lab must now respond with a written plan of correction by Sept. 14.

Orig3n spokesman Tony Plohoros told Gannett New England, which first reported the story last week, that the false positives were due to “human error” and the lab is working with state health officials to correct problems at the facility.

SACRAMENTO, Calif. — The California Highway Patrol chose not to break up an outdoor worship service at the state Capitol on Sunday in part because it said it would have taken too long and required too many officers to safely disperse the roughly 3,000 people in attendance.

The highway patrol, which controls access to the state Capitol grounds, said it issued an event permit because the organizer said he was expecting between 500 and 1,000 people, convincing officers that “proper physical distancing could be achieved” to prevent the spread of the coronavirus.

But on Sunday, about 3,000 people attended the event.

The Highway Patrol noted most who attended “failed to socially distance,” despite reminders from both a permit officer on site and Sean Feucht, who hosted the event.

He describes himself on his website as “a missionary, artist, speaker, author, activist and founder of multiple worldwide movements.”

School officials said service was interrupted in Olathe Tuesday morning when nearly 50,000 users on separate devices tried to log on to the district’s online teaching system that is designed for 30,000 students.

The district’s middle and high school students were using only remote learning, while elementary students started with a hybrid of online and in-person classes.

Spokesman Cody Kennedy said the district had previously increased its bandwidth and after more servers were added, the disruption was cleared by mid-morning Tuesday. Kennedy declined to speculate on why traffic on the system was so unexpectedly heavy.

The department said Monday that the inmate at the Eddie Warrior Correctional Center in Taft died Saturday at a hospital. The woman, whose name wasn’t released, also had undisclosed health issues.

The department said the state medical examiner will determine whether coronavirus was a factor in her death.

The state health department announced increases of 833 cases in the state and one additional death since Monday. It’s reported 65,053 total coronavirus cases and 854 confirmed deaths in Oklahoma.

HOUSTON — Three of Texas’ largest school districts experienced technical problems on Tuesday as their students started the school year online because of the coronavirus.

In the Houston school district, the state’s largest with 209,000 students, a web hosting service went down. That caused problems for families trying to sign into the district’s main classwork portal. The problems were resolved by mid-day when families were given another link.

In Dallas and Fort Worth, the school districts said in a Tweet they were experiencing technical problems with phone lines and websites and working to fix them.

The problems came as Texas Gov. Greg Abbott on Monday extended the state’s disaster declaration in response to the pandemic. The state has more than 640,000 cases and nearly 13,500 deaths.

The country’s health minister Yuli Edelstein and coronavirus czar Ronni Gamzu, who is leading the fight to stem Israel’s surging coronavirus cases, were among those set to self-isolate.

Gamzu has pushed for city-specific measures to contain the outbreak rather than a countrywide lockdown. He’s faced resistance from lawmakers in communities where cases are spiking.

Tightened restrictions on 40 cities and towns were announced Tuesday. The new measures include nighttime curfews, limiting gatherings to 10 people indoors and 20 outdoors and shutting down schools.

Israelis are girding for more restrictions amid the high Jewish holidays later this month.

Israel has one of the world’s worst outbreaks, adjusted for a population of 8.8 million. It has reported 135,288 coronavirus cases and 1,031 confirmed deaths, according to Johns Hopkins University.

ROME — Italy added another 1,370 coronavirus cases to its confirmed daily tally, while ex-Premier Silvio Berlusconi remains hospitalized with the coronavirus.

Berlusconi’s personal doctor Alberto Zangrillo reported Tuesday that the patient was responding well to treatment and his condition was “reassuring.”

The 83-year-old Berlusconi tested positive for the virus on Sept. 2 and was hospitalized two days later with a lung infection.

The number of daily infections has topped 1,000 for several weeks and has reached 280,153. The Health Ministry reported 10 deaths in the past day, bringing Italy’s death toll to 35,563, the second highest in Europe after Britain.

ANN ARBOR, Mich. — Graduate students who teach classes were on strike Tuesday at the University of Michigan over in-person instruction during the coronavirus pandemic and other issues.

The strikers chanted and held umbrellas while marching in the rain. “I do not want my students and colleagues to get a chronic illness because this university decided it was most important to collect tuition,” Surabhi Balachander wrote on Twitter.

The Graduate Employees’ Organization, which represents more than 1,000 instructors, has called for a four-day strike.

Most classes at the University of Michigan have shifted to online. But the union says the university isn’t doing enough to prevent the spread of COVID-19. It robust plans for testing, contact tracing, and campus safety. It wants plans for testing and contact tracing, allowing graduate employees to work remotely and a more flexible childcare subsidy.

University spokesman Rick Fitzgerald says the strike is illegal under state law and the union contract, and the university plans to continue classes in the event of a strike.

PRAGUE — Czech Prime Minister Andrej Babis has reacted angrily to the local branch of World Health Organization voicing its opposition to his country’s possible plan to reduce contract tracing for the coronavirus.

The WHO says the situation in the Czech Republic “is concerning” and data shows “elevated and growing levels of transmission across many regions and districts.” It says the solution is not to stop tracing, but to rapidly scale up the service.

Babis tweeted the WHO should “keep quiet,” saying the country has one of the lowest death rates in Europe.

The Czech Republic has registered a surge of confirmed cases to record levels in recent days. Health authorities in Prague acknowledged they have reached their limit in contact tracing and up to 30% of contacts are not identified.

The Czech Republic has 28,716 confirmed cases and 437 confirmed deaths.

The cases were mainly in private homes and among young people. There were reports several public and private companies have asked employees to work from home.

On Monday, the government lowered the size of gatherings from 100 to 50 in greater Copenhagen, and announced bars and restaurants should close at midnight instead of 2 a.m.