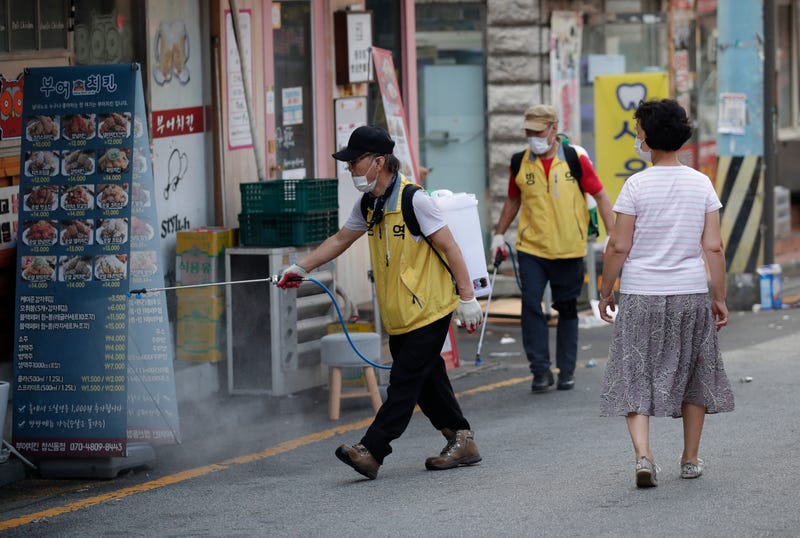 SEOUL, South Korea — South Korea has counted its 18th straight day of triple-digit daily jumps in coronavirus cases as its health minister warned about an increase in transmissions gone untraced, and infections among senior citizens.

The 248 new cases reported by the Korea Centers for Disease Control and Prevention Monday brought the national caseload to 19,947, including 324 deaths.

KCDC said 187 of the new cases came from the densely populated Seoul metropolitan area, which have been at the center of the viral resurgence this month.

But infections were also reported in major cities across the country, including Busan, Daejeon, Ulsan and Daegu, which was the epicenter of the country’s previous major outbreak in late February and March that was stabilized by April.

Health Minister Park Neung-hoo during a virus meeting said it has become difficult for epidemiological workers to track transmissions and predict infection routes, saying they haven’t been able to trace the infection source of more than 20% of the cases found in the past two weeks.

Officials are also concerned that the death toll could rise because many of those who tested positive this month were 60 years or older, an age group that’s more likely to experience serious health complications caused by the virus.

— What happens when pandemic locks down a globe-trotting pope?

MELBOURNE, Australia — Victoria on Monday recorded its deadliest day of the pandemic as the Australian government urged the hot spot state to announce plans to lift lockdown restrictions.

The death toll eclipses the previous record of 25 set on Aug. 17. The tally of new infections is the lowest since 67 new cases were recorded on June 30 in the early weeks of the second wave of the pandemic.

A six-week lockdown in the state capital Melbourne, Australia’s second-largest city, is due to be relaxed on Sept. 13. But the state government has not said how it will be relaxed or given any assurances that it won’t be extended.

Australia’s Treasurer Josh Frydenberg said on Monday he disagreed with the Victorian government that it was too early to announce plans to reopen the economy.,

“Business is very frustrated because they haven’t been told when can they open up, when can people get back to work,” Frydenberg told Nine Network television.

Frydenberg pointed to a Treasury Department forecast that in the next three months more people in Victoria will be receiving pandemic employment subsidies than from the rest of Australia combined. Australia pays employers an allowance known as Job Keeper to continue paying staff who have no work to do.

Consumer spending had fallen 30% in Victoria due to the lockdown while spending had declined by only 3% across the rest of Australia.

The 287 students who will be tested Sunday and Monday live in the Rich, Jones, Morgan and Davis dorms on the campus in Logan. There have been no reported positive tests for COVID-19 in those residence halls so far. Students in those dorms must quarantine until the test results are available, which could take up to four days.

They are also asked to fill out a form to ensure they receive academic support, food deliveries and other resources. Classes are scheduled to begin on Monday for about 28,000 undergraduate and graduate students. Utah State is one of a small handful of schools using wastewater sampling to help safeguard against a COVID-19 outbreak, The Salt Lake Tribune reported. Officials with the University of Arizona said Thursday the school used wastewater testing to prevent a COVID-19 outbreak on campus.

A test of just over 300 people in one dorm with elevated levels of coronavirus in the wastewater turned up two cases, said university President Robert Robbins. Neither student had symptoms. They were isolated.

PHILADELPHIA — Temple University has announced a two-week halt of in-person classes as Philadelphia officials called on all college and university students in the city to avoid all social gatherings with people outside their households.

Temple officials said Sunday that new test results over the weekend had pushed the number of active COVID-19 cases from the 58 reported Friday to 103 active cases, most of them among people with no symptoms and a small number with mild to moderate flu-like symptoms.

University president Richard Englert said officials believe they are seeing “new cases that result from small social gatherings happening off campus.” He said that prompted the two-week “pause” on in-person classes and a contact tracing effort.

ATHENS, Greece — The confirmed number of new coronavirus cases in Greece has exceeded 10,000, and more than half of them were reported this month, Greek health authorities announced Sunday.

Over the past day, there have been 157 new cases confirmed, of which 41 were international arrivals. There were also two deaths.

There are 35 patients on ventilators and 149 have exited intensive care.

The government will decide Tuesday on which day schools will open. It will choose between Sept. 7 or the following Monday, Sept. 14. Mask wearing will be mandatory, but some parents are opposed to this.

OKLAHOMA CITY — The number of reported coronavirus cases in Oklahoma has surpassed 58,000 and the number of related deaths is nearly 800, the Oklahoma State Department of Health said Sunday.

There are now 58,020 reported cases and 799 deaths due to COVID-19, the illness caused by the virus. The true number of cases in Oklahoma is likely higher because many people have not been tested, and studies suggest people can be infected and not feel sick.

On Friday, Gov. Kevin Stitt extended a state of emergency first issued March 15 in response to the virus outbreak in Oklahoma.

The order includes all 77 counties in the state and activates a provision in state law that allows absentee voters to mail their ballots by verifying their signatures with a copy of an approved identification. An approved ID includes a state driver’s license or a military or federally recognized Indian tribe or nation.

ROME — The number of COVID-19 patients in intensive care beds in Italy has been rising in the past few weeks.

On Sunday, 86 persons infected with the coronavirus occupied ICU beds, compared to 38 in late July, as returning vacationers drive up Italy’s numbers of day-to-day new caseloads as well as hospitalizations.

Italy registered 1,365 new infections since Saturday, according to Health Ministry figures. Still, those numbers are low when compared to the daily bulletin early in the pandemic, when thousands of Italians each day were testing positive for COVID-19, and a few thousand were needing intensive care, overwhelming hospital staff.

Italy counts 268,218 confirmed infections and 35,477 known deaths, including four in the last 24 hours. After months in which the heaviest concentration of cases occurred in northern Italy, lately many southern regions are seeing sharply rising numbers. On Sunday, Campania, the region which includes the southern metropolis of Naples, had the most new cases in Italy – 270.

In a statement Sunday, the national command and control center said only four people died from the new virus in the previous 24 hours, taking overall COVID-19 deaths to 6,288 since the start of the outbreak in February.

However, health officials are still trying to understand the reason for a steady decline in infections in Pakistan, which witnessed twin peaks in June when daily confirmed cases reached up to 6,825.

It was then when hospitals were full amid shortage of medicine, oxygen and ventilators, and even face masks were not easily available.

But the situation suddenly began improving after June and currently about 1,000 COVID-19 patients are being treated in Pakistan.

PARIS — Not all French classrooms can safely reopen Tuesday, the education minister acknowledged Sunday, amid a persistent rise in coronavirus infections that is threatening the government’s push to get France’s 12.9 million schoolchildren back in class.

“It’s being decided by a day-by-day analysis based on the health situation of each territory,” Education Minister Jean-Michel Blanquer said Sunday on France-Info radio. Some classes will remain closed, he said, but “as few as possible.”

A collective of doctors published an appeal Saturday saying the governments’ school virus measures aren’t strict enough. It urged mask requirements for children as young as six and a mix of online and in-person schooling.

The government wants to reopen all schools starting Tuesday to reduce learning gaps worsened by the spring lockdown, and to get parents back at work and revive the economy.

France reported 5,453 new daily infections Saturday, compared to several hundred a day in May and June. The national health service says the growth is exponential, and neighboring countries have imposed quarantines or testing for people arriving from parts or all of France.

The number of confirmed coronavirus cases globally has topped 25 million, according to a tally kept by Johns Hopkins University.

The U.S. leads the count with 5.9 million cases, followed by Brazil with 3.8 million and India with 3.5 million.

The real number of people infected by the virus around the world is believed to be much higher — perhaps 10 times higher in the U.S., according to the Centers for Disease Control and Prevention — given testing limitations and the many mild cases that have gone unreported or unrecognized.

NEW DELHI — India has registered a record new 78,761 coronavirus cases in the past 24 hours, the worst single-day spike in the world, as the government continues to further ease pandemic restrictions nationwide.

The Health Ministry on Sunday also reported 948 deaths in the past 24 hours, taking total fatalities to 63,498.

India now has the fastest-growing daily coronavirus caseload of any country in the world, and has reported more than 75,000 infections for the fourth consecutive day.

Sunday’s surge has raised the country’s total virus tally to over 3.5 million and comes at a time when India is reopening its subway networks and allowing sports and religious events in a limited manner from next month as part of efforts to revive the economy.

The crowded subway, a lifeline for millions of people in capital New Delhi, will be reopened in a phased manner from Sept. 7. Schools and colleges will, however, remain closed until the end of September.

The South Asian country has the third-highest caseload after the United States and Brazil, and its fatalities are the fourth-highest.

Even as eight Indian states remain among the worst-hit regions and contribute nearly 73% of the total infections, the virus is now spreading fast in the vast hinterlands, with experts warning that the month of September could be the most challenging.