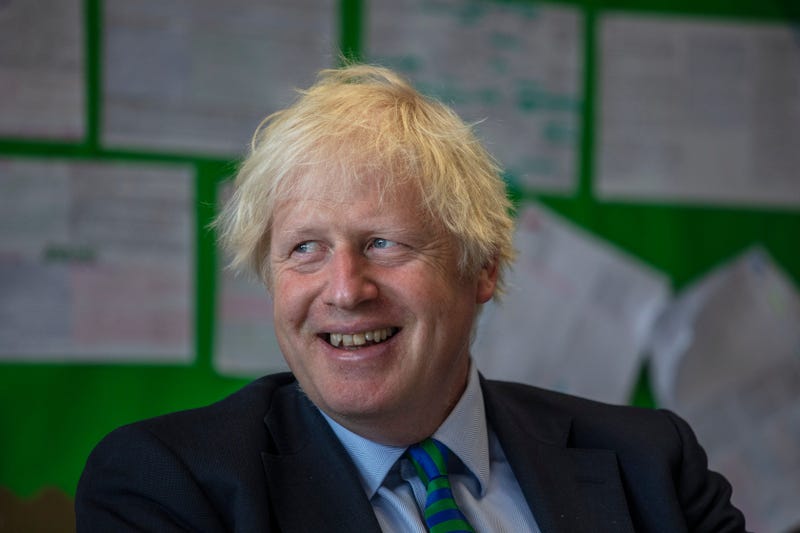 Photo credit Britain's Prime Minister Boris Johnson smiles, during a visit to Castle Rock school on the pupils' first day back, in Coalville, East Midlands, England, Wednesday, Aug. 26, 2020. Following mounting pressure to change tack, the British government decided late Tuesday to ditch its advice that high school students in England don’t need to wear face masks while at school. In another in a series of abrupt changes in coronavirus-related policy, the government said children in secondary schools — those above 11 years of age — in areas under local lockdown rules, such as Greater Manchester, will have to don face masks when moving around corridors and communal areas. (Jack Hill/Pool Photo via AP)
By The Associated Press

LONDON (AP) — The British government is encouraging workers to return to their offices amid concerns that the shift to working from home during the coronavirus pandemic is hurting coffee bars, restaurants and other businesses, leaving city centers virtual “ghost towns.”

Prime Minister Boris Johnson's Conservative government plans to roll out a media campaign next week that will encourage employers to show staff members what they have done to protect them from COVID-19 and make it safe to return to traditional workplaces.

Transport Secretary Grant Shapps said Friday this was the right time for many people to return to their offices because their children will be going back to school next week. He also said prolonged isolation from friends and colleagues is taking a toll on workers, particularly young people.

“For many people’s mental health, it is important to return to a safe workplace. So that’s why workplaces are being made COVID secure over the summer, and for a lot of people it will be the right time to return,″ Shapps told the BBC. “Others, I accept, will carry on in a much more flexible way than they did in the past.’’

The Confederation of British Industry has warned that office closures are taking a wide toll on the economy as traffic plunges at shops that rely on walk-in business. That impact was demonstrated Thursday when sandwich shop chain Pret a Manger announced plans to cut about 2,800 jobs around Britain after sales fell 60%.

The British government should expand coronavirus testing and highlight efforts to reduce virus transmission on trains and buses to encourage people to return to their offices, the CBI said.

It also claimed that bringing workers back into the office is also a matter of fairness, because many people can’t work from home and young people, in particular, are often forced to spend long hours in tiny apartments. The group represents 190,000 businesses employing more than 7 million people.

“The costs of office closure are becoming clearer by the day. Some of our busiest city centers resemble ghost towns, missing the usual bustle of passing trade,″ CBI Director General Carolyn Fairbairn said. “This comes at a high price for local businesses, jobs and communities.”

“We’re going to be quite careful and thoughtful about how we bring people back into offices and evolve office space,'' she said. “What we’ll see is a bit more of a hybrid working model, and that’s something we’ll work on very carefully.''

More than 50,000 staff members of NatWest Group will keep working from home into 2021.

The government has been nudging people back to work for several weeks but economic pressures are intensifying.

“I think there’s a limit, just in human terms, to remote working,″ Shapps said. “And there are things where you just need to spark off each other and get together in order to make progress.”

But many workers are reluctant to return to the office with COVID-19 cases on the rise again and Britain already having the highest confirmed virus death toll in Europe at over 41,560 people.

The government recorded 1,522 new daily infections on Thursday, up from a low of 367 on July 12. The figure is still far below the peak of 5,488 cases reported on April 22 but experts say all those numbers undercount the true impact of the pandemic due to limited testing and other factors.

Unions are urging employers to be flexible and recognize that the world of work has changed. Dave Penman, general secretary of the union that represents top civil servants, said government ministers are sounding like “dinosaurs.”

“Millions of employees are working from home very successfully whilst employers are recognizing that the world of work has changed and are embracing it,” he said in a tweet. “The genie won’t fit back in the bottle, best not try.”