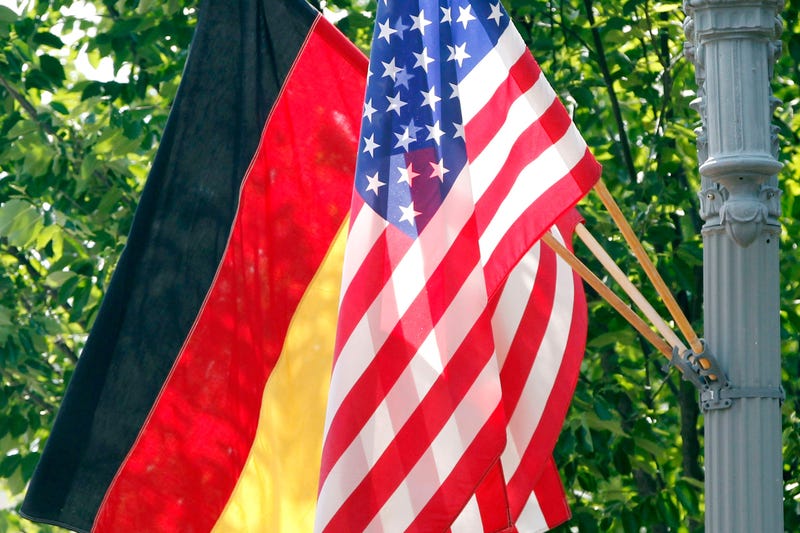 Photo credit FILE - In this June 6, 2011 file photo, the German and U.S. flags fly on a lamp post in front of the White House in Washington ahead of German Chancellor Angela Merkel's visit. Defense officials say the U.S. will pull 12,000 troops from Germany, bringing 6,400 forces home and shifting 5,600 to other countries in Europe, including Italy and Belgium. The plan will cost billions of dollars and take years to complete. (AP Photo/Charles Dharapak)
By The Associated Press

WASHINGTON (AP) — Spurred on by President Donald Trump's demand to pull troops out of Germany, the U.S. will bring about 6,400 forces home and shift about 5,600 to other countries in Europe, U.S. defense leaders said Wednesday, detailing a Pentagon plan that will cost billions of dollars and take years to complete.

The decision fulfills Trump's announced desire to withdraw troops from Germany, largely due to its failure to spend enough on defense. A number of forces will go to Italy, and a major move would shift U.S. European Command headquarters and Special Operations Command Europe from Stuttgart, Germany, to Belgium.

Defense Secretary Mark Esper said some moves will begin in months and will leave about 24,000 troops in Germany. He said that while the decision was “accelerated” by Trump's orders, the moves also promote larger strategic goals to deter Russia, reassure European allies and shift forces further east into the Black Sea and Baltic regions.

Trump, however, reasserted his very narrow reason Wednesday, telling reporters, “We’re reducing the force because they’re not paying their bills. It’s very simple. They’re delinquent.” He added that he might rethink the decision to pull troops out of Germany "if they start paying their bills.”

Trump has repeatedly accused Germany of failing to pay bills, which is a misstatement of the issue. NATO nations have pledged to dedicate 2% of their gross domestic product to defense spending by 2024, and Germany is still short of that goal, at about 1.4%.

Esper said the military moves will cost in the “single digit” billions of dollars. Much of it will require congressional approval to add or reallocate funds, something that may be difficult since many lawmakers have expressed opposition to some of the moves. And it’s also unclear if the plan would survive if Trump is not reelected in November.

Members of Trump’s own political party have criticized the troop moves as a gift to Russia and a threat to U.S. national security. Twenty-two Republicans on the House Armed Services Committee sent a letter to Trump saying a reduced U.S. commitment to Europe’s defense would encourage Russian aggression.

Sen. Mitt Romney, R-Utah, on Wednesday called the plan a “grave error,” saying it's a slap in Germany's face that will do lasting harm to American interests.

NATO Secretary General Jens Stoltenberg, meanwhile, welcomed the U.S. move and said Washington has been consulting allies on the matter recently. Trump’s announcement on the withdrawal in June blindsided the alliance.

Germany’s Defense Ministry refused to comment on the moves, saying the plans needed to be discussed internally first. Chancellor Angela Merkel has defended Germany’s defense spending, saying that it has increased and that the country will continue to work toward the 2% benchmark.

Following the announcement, a lawmaker with the opposition Left Party, which has its roots in the former East German communist party and has long urged the withdrawal of American troops, said the plan was “far from sufficient.”

“Wars are waged all over the world through the U.S. bases in Germany, including drone attacks that violate international law,” said Tobias Pflueger, deputy party leader with the Left.

The Pentagon announcement is closely tied to the plan to increase the U.S. troop presence in Poland, a shift long desired by Warsaw and Polish President Andrzej Duda.

Officials said the troops moves will require construction at bases in the U.S. to accommodate the additional forces. They said that in the future other units would rotate in and out of Europe.

Germany is a hub for U.S. operations in the Middle East and Africa. The decision to keep nearly half the forces in Europe is a clear move by the Pentagon to assuage allies by avoiding the complete withdrawal of 12,000 troops out of the region. And by spreading forces into the east, it sends a message to Russia that the U.S. is not reducing its commitment to the region and remains ready to protect Eastern Europe from Moscow's aggression.

Sen. Jim Inhofe, the Republican chairman of the Senate Armed Services Committee, has voiced support for the plan while also acknowledging it will take “months to plan and years to execute.”

Trump announced last month that he wanted to cut the number of active duty U.S. troops in Germany from roughly 36,000 to less than 25,000. Shifting forces out of the country had long been rumored and is in line with Pentagon efforts to put more troops in the Indo-Pacific. But Trump’s comments indicated the move was tied more directly to his anger over the NATO spending issue.

Trump has branded Germany “delinquent” for failing to meet the NATO goal set in 2014, and has asserted that the Germans have long shortchanged the U.S. on trade and defense.

At a Rose Garden event last month with Duda, Trump said some of the troops from Germany would go to Poland. On Wednesday, officials suggested that Poland may get some additional rotational forces that would go in and out of Europe.

Under an agreement announced last year, the U.S. said it was sending about 1,000 more troops to Poland, and progress is being made to prepare for those moves. Under that agreement, the U.S. will add a division headquarters, a combat training center, an unmanned aircraft squadron and structure to support a rotational Army brigade.

Overall, the U.S. has about 47,000 troops and civilian personnel in Germany. Most of the 36,000 on active duty are in a handful of larger Army and Air Force bases including Ramstein Air Base, a regional hub. There also are 2,600 National Guard and Reserve forces and almost 12,000 civilians there.

After Trump’s meeting with Duda, Esper in early July made a rare overseas trip to NATO to reassure allies that Washington is still committed to the region and that he will consult with them on troop movements. Because of the coronavirus threat, international travel has been significantly limited.