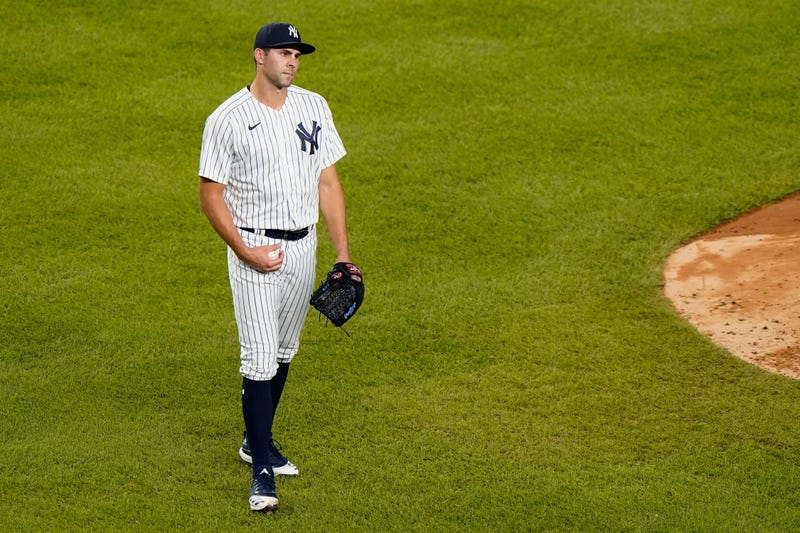 Photo credit New York Yankees relief pitcher Ben Heller reacts after he was tossed for hitting a batter during the fifth inning of a baseball game against the Tampa Bay Rays, Wednesday, Sept. 2, 2020, at Yankee Stadium in New York. (AP Photo/Kathy Willens)
By The Associated Press

NEW YORK (AP) — Yankees reliever Ben Heller was ejected from Wednesday night’s game against the Tampa Bay Rays for hitting Hunter Renfroe in the leg with a pitch, the latest chapter in a simmering rivalry between the top two teams in the AL East.

Heller plunked Renfroe with a 95 mph fastball with one out in the fifth inning and was promptly tossed by first base umpire Chad Fairchild. Heller tried to plead his case and so did acting New York manager Carlos Mendoza before Luis Cessa came on to pitch.

The ejection occurred hours after Yankees closer Aroldis Chapman was handed a three-game suspension by Major League Baseball for throwing a 101 mph fastball over Mike Brosseau’s head in the ninth inning of New York's 5-3 win over the first-place Rays on Tuesday night.

Chapman said Wednesday afternoon the pitch was not intentional and he is appealing the suspension.

Yankees manager Aaron Boone and Tampa Bay counterpart Kevin Cash were each given a one-game suspension and served their bans Wednesday.

Chapman’s first pitch to Brosseau with two outs in the ninth inning whizzed past Brosseau’s head. Umpires convened before issuing warnings to both benches, and Cash was ejected after coming onto the field to argue.

Chapman struck out Brosseau to end the game, and Brosseau began walking toward the visiting dugout before turning back to exchange words with someone on the Yankees. The dugouts and benches emptied and players gathered near home plate, but they mostly kept their distance before dispersing to their respective clubhouses.

After the game, Cash seemed to threaten the Yankees.

“Somebody’s got to be accountable,” he said. “And the last thing I’ll say on this is I got a whole damn stable full of guys that throw 98 mph. Period.”

Tensions have run high between the teams in recent years, at least since now-retired Yankees left-hander CC Sabathia was ejected for plunking Jesus Sucre in 2018.