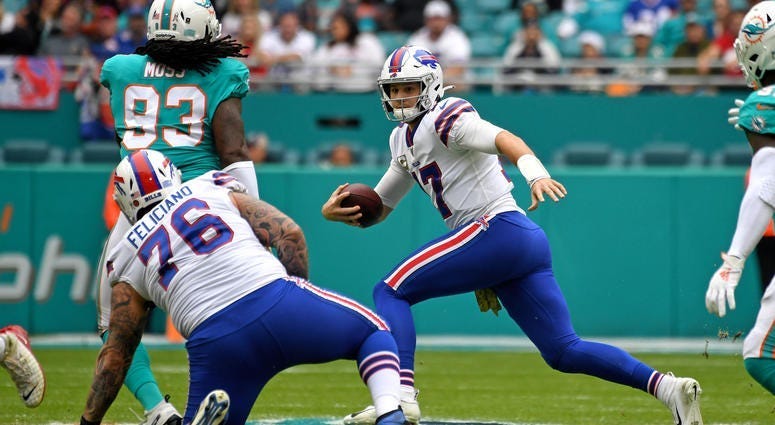 Miami, FL (WBEN) The Buffalo Bills needed a rebound game after losing to the Cleveland Browns last week and they got it Sunday topping the Miami Dolphins 37-20 in South Florida. Josh Allen passed for over 250 yards and the defense gave up a few big plays but overall, stymied the Dolphins offense for much of the contest. The special teams unit though could’ve hoped for a better day as they lost an on-side kick and yielded a long kickoff return.

Buffalo scored on their opening drive with a 51-yard field goal by Steven Hauschka who was also looking for a bounce back day following his less than stellar performance last week. On Miami’s first possession, it certainly looked like the Bills’ defenders were revved up and ready to go as they stopped the run and started to get after quarterback, Ryan Fitzpatrick. The Bills gave Hauschka another opportunity on their possession following Miami’s three and out, he came through with a 34-yard field goal.

Josh Allen had an impressive game he threw for three touchdowns, two to John Brown and another to Dawson Knox. Allen also had an eight-yard, rushing touchdown, the 15th of his two-year career. Allen finished the day with 256 yards passing and another 56 rushing.

The victory gave the Bills (7-3) their best 10-game record since 1999. But a recent regression — they had lost two of their past three games — and a soft schedule has left doubts about whether they deserve to make the postseason for only the second time in 20 years.

Through Week 10, Buffalo’s wins had come against opponents with a combined record of 12-44.

Miami was able to stay competitive thanks to a few big passing plays and special teams contributions. Trailing 16-0 Fitzpatrick completed a 50-yard pass to Devante Parker which set up a short rushing touchdown by Kalen Ballege. On the ensuing kickoff, the Dolphins pulled the on-side kick and recovered. Luckily for Buffalo on the very next play the officials reversed an incomplete pass call and ruled the receiver fumbled which gave the Bills another possession that resulted in Allen’s scoring pass to Knox which made it 23-7.

The Dolphins then got a big break with a 101 yard kickoff return from Jakeem Grant which kept them within nine points going into halftime.

Buffalo scored on their first possession of the second half as Allen ran in from eight yards out. The Dolphins though continued to hang in with another touchdown from Grant, this time from the Wild-Cat formation. The Bills finally locked up the game with Allen’s second scoring pass to Brown, who finished with nine catches for 137 yards and the two scores. Devin Singletary led the Bills in rushing as he carried 15 times for 75 yards.

The gamble worked but didn’t pay off when Dolphins rookie coach Brian Flores tried an onside kick late in the second quarter after his team scored to trail 16-7.

Kicker Jason Sanders recovered. But on the next play, receiver Allen Hurns lost a fumble at the Buffalo 25.

Bills: T Ty Nsekhe (right ankle) was carted off the field in the third quarter. ... S Siran Neal (concussion) sat out the second half.

The Bills play host to the Broncos next Sunday. Denver hasn’t won in Buffalo since 2007.