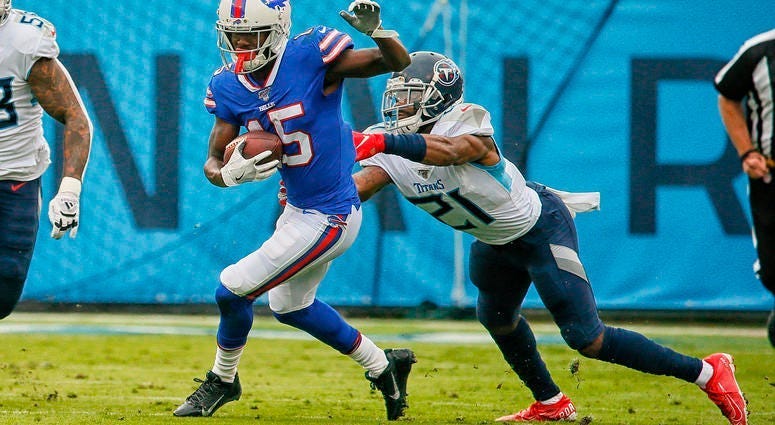 Nashville, TN (WBEN) The Buffalo Bills took advantage of timely penalties and missed field goals while getting some big plays by their youngsters as they were able to grind out a 14-7 win over the Tennessee Titans Sunday.

The game was expected to be a defensive struggle and it turned out just that way as both offenses found little room to operate before the Bills got the first touchdown of the game. Josh Allen found tight end, Lee Smith late in the second quarter to give the Bills a 7-0 lead at the end of the half. Allen got the start despite being in the league’s concussion protocol for much of last week.

The defenses continued their slugfest into the second half until Isiah McKenzie took a shuffle pass 46 yards deep into Tennessee territory. That play was followed by an Allen to Duke Williams scoring pass from seven yards out. It was the first career touchdown for Williams who was activated from the Bills’ practice squad on Saturday.

Allen finished the day 23 of 32 for 219 yards, two touchdowns and one interception. For Tennessee, Marcus Mariota was under pressure most of the afternoon and finished with just 183 yards passing.

Phillips got to Mariota early and often as the Bills kept the Titans from crossing midfield much of the first half. Phillips had the most sacks by a Bills defender since Lorenzo Alexander had three on Oct. 19, 2016, at the Rams, and he was the first with three sacks by halftime since Mario Williams in 2013 against Carolina. Alexander also had a sack in this game.

Bills center Mitch Morse was taken to the locker room from the sideline by cart late in the first half. Jon Feliciano replaced him for the third quarter. LB Matt Milano hurt a hamstring, and rookie right tackle Cody Ford and DE Trent Murphy both were evaluated for head injuries in the second half.

Titans cornerback Chris Milton hurt his calf and did not return.