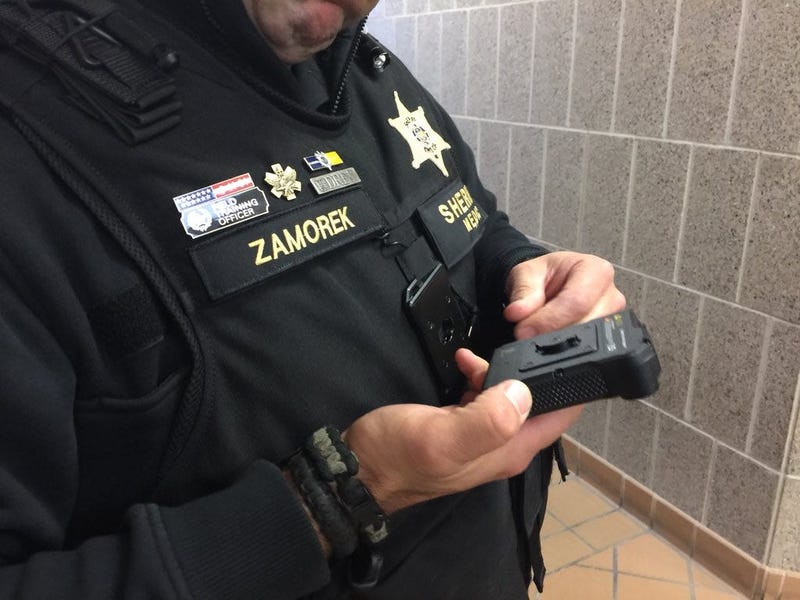 During the regularly scheduled public safety committee meeting, the legislature unanimously approved an amendment on a resolution which would provide $600,000 in funding for sheriff's department. The original resolution would have transferred the money from the county's Department of Information and Support Services (DISS) to the sheriff's office specifically for the use of a pilot program.

The resolution was amended to include notes that the sheriff's office was not in contact with DISS on the plans for body cameras and did not open eight of the responses to their request-for-proposals because the sheriff's department wanted to wait until the funding was transferred to their budget. Despite the sheriff's office not having the money, Chairwoman April Baskin sent a letter to Sheriff Howard last Thursday urging him to review the proposals after they received a legal opinion that said the sheriff could review them despite not having the funds to implement the body camera program.

Lawmakers are now expected to transfer the $600,000 in funding from DISS to the sheriff's office for body cameras when they convene again in September. The sheriff's department would then agree to a vendor for the body cameras by September 26, though they initially planned to select a vendor by August 30.

Despite passing the resolution unanimously, the legislature had its heated moments. Prior to the committee meetings, the sheriff's office spokesperson, Scott Zylka, was never given notice that he'd be asked about body cameras.

"This item is on the agenda, which means it can be talked about at any moment when we have a public safety committee," Baskin said during the meeting and noted that it was previously talked about on Wednesday.

But Baskin also said she has personal problems with the sheriff.

"I do not trust the sheriff," she said. "I told Scott Zylka a month ago that he would be back here with another excuse as to why body cams would not be implemented. This reason is a joke. It is an absolute joke. To me, it is just a power struggle. There is funding that has been approved for body cameras because the sheriff himself has refused to put up the money himself in his budget."

Body cameras are still debated in Erie County. The soonest they will come are in September. Democratic chair April Baskin shared this email which came from Sheriff Tim Howard. pic.twitter.com/6VcRtSv5SB

Shortly after Baskin began her criticisms of Sheriff Howard, staffers for the legislature handed out a packet featuring e-mail exchanges from the sheriff's office. In the e-mail, Zylka responded to questions about how many deputies who wore cameras during the trial period filled out a use of force form. He wrote that two of the thirteen deputies did. Howard then responded to that question writing "Whoa....Is she clever enough to now ask for the video that goes with those use of force incidents? I trust we have reviewed them ourself?"

Those use of force incidents that were caught on video were from a Buffalo Bills tailgate in 2017, when Nicholas Belsito was bloodied by Deputy Kenneth Achtyl, who was charged with four misdemeanors in May.

"If this e-mail was so personal to me that I would not have followed through with the FOIL request and I would not have tried to quietly resolve this issue with the powers that be here in Erie County," she said. "If it was something that was personal, you would have found it on social media and screaming from the rooftops four months ago when he said those offensive comments."

She said the reason why she publicly released the e-mail is because she was questioned why she had an issue with voting to transfer the funding.

"There is nothing personal," she said. "I am not shocked that this sheriff has taken this position of power and wanting to have the money sit in his account knowing he can't even spend it without approval from the legislature...We will not be bullied or pushed around by the sheriff and I'm glad we've come to a resolve today."

Zylka said after the meeting that there is a commitment from the sheriff's office to use the funds for body cameras.

"That is something we're happy about because that assurance will get this process completed," Zylka said. "We're at the threshold of initiating this. I don't believe we'll receive any other RFP's but we have offered one full week of mail service to see. (Friday) we will begin opening the RFP's and do the initial qualification of the vendor proposals."

Zylka said the RFP's received were not opened because they offered a postmark date and said they're not behind schedule.

Legislative Minority Leader Joe Lorigo said that the democrats in the legislature had a personal vendetta against the sheriff which is why the money was originally given to DISS.

"I'm not here to play personal politics or fight these types of battles," Lorigo said. "If the money was in the sheriff's office, I believe they would have done with it what they were supposed to. Even so, they'd have to come before the legislature to spend it anyway. Really, today was all about April Baskin making a political statement in front of the media."

Lorigo said the e-mails were bad but noted that Howard was never asked to come to Thursday's meeting.