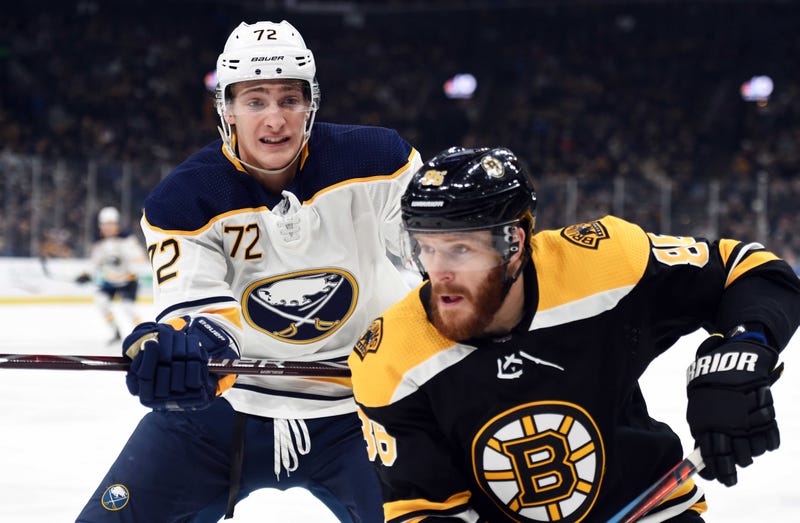 Boston won three of four games in the season series against Buffalo.

Rask was looking for his first shutout of the season, but former Bruins' defenseman Rasmus Ristolainen beat him with a wrist shot on the glove side with 2:38 left in regulation.

Linus Ullmark made 39 saves for Buffalo, which has won just once in its last five games.

The Sabres pulled Ullmark with just over a minute left for an extra skater, but were unable to get a shot on goal.

Backes played in his first game after serving a three-game suspension for an illegal check to the head on New Jersey Devils forward Blake Coleman.

Wagner had a goal wiped out when Sean Kuraly was called for goaltender interference 20 seconds into the game, but the Boston winger scored just under 10 minutes later, firing a wrist shot past Ullmark's glove to make it 1-0.

Backes made it 2-0 when he finished off a 2-on-1 break by sending a wrist shot under the cross bar two minutes into the second period.

Boston forward Jake DeBrusk didn't shy away from a question after the morning skate when asked if it was too early to be called an important game between the clubs, which entered tied for third in the Atlantic Division.

"No, I think anytime you play a division team it's a big game," he said. "These games mean a lot towards the end of the year."

The Bruins then went out and dominated in the second period, holding the Sabres to just two shots on goal in the opening 15-plus minutes. Boston had a 13-10 edge in shots in an entertaining first period filled with high-energy rushes. Rask was solid in the first and third, controlling rebounds and cutting down angles on most of the shots.

Rask made a nice glove stop on Jeff Skinner's backhander from the edge of the crease late in the second. He also made a right-pad stop on Skinner's close bid early in the third.

NOTES: Bruins coach Bruce Cassidy said defenseman Charlie McAvoy, who missed his fifth straight with a lower-body injury, should be returning to practice this week. . Boston entered the game having allowed a league-high nine short-handed goals. Cassidy said he believes short-handed scoring is up overall in the NHL over the last few years because teams adopted the practice of playing four forwards on power plays, but he also admitted "ours are way too high."