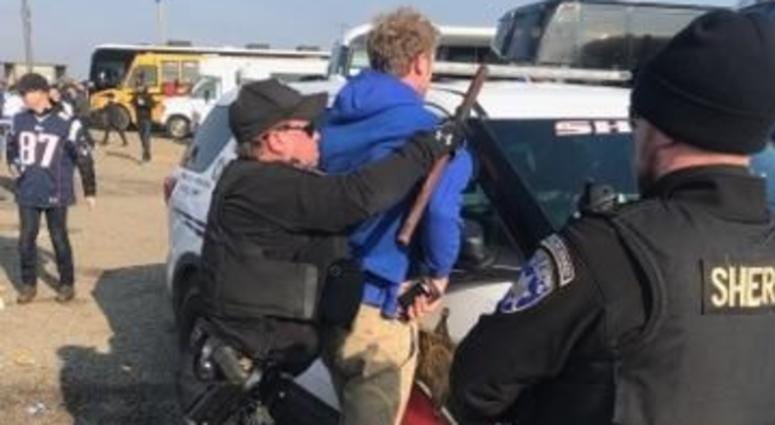 The officer is facing four misdemeanor charges including two counts of assault, falsifying business records, and official misconduct. The charges stem from a December 2017 incident at a Buffalo Bills tailgate, where he was seen on video arresting Nicholas Belsito.

The first half of Tuesday’s trial highlighted the lead up to Belsito’s arrest. Achtyl arrested a friend of Belsito’s. Clips played in the courtroom showed that Belsito was in the area where his friend was arrested. He was, at one point, pushed by a deputy because of his proximity to the scene.

Belsito was seen on body camera and cell phone video approaching Achtyl in a sheriff’s vehicle and asking where his friend was being taken two. After Achtyl responded with “10 Delaware”, the Erie County Holding Center, he told Belsito to “beat it”. Belsito left but said an expletive at the officer, who left his car and arrested Belsito.

At one point Tuesday, Belsito was asked if he “appreciates” law enforcements' concern about a stranger approaching their vehicle when they have a prisoner in the back.

“No,” Belsito said, adding that he believes he had a right to do so.

Belsito was questioned about saying “no” when told multiple times by Achtyl to “beat it”. Belsito said this was in response to confusion over the statement “10 Delaware”.

In the afternoon, much of the cross examination by defense attorney Rodney Personius was about the physical arrest of Belsito, which included a focus of the baton Achtyl used on Belsito. Belsito did at one point admit to contradictory statements on details such as his March claim that he put his hands on Achtyl’s baton. In reality, he put his hand on Achtyl’s arm during the arrest.

When asked if he had any past experience in physical encounters, Belsito said Tuesday that he took a karate class as a kid but he also noted he was once robbed at gunpoint while working at a Rite-Aid.

Most of Tuesday was highlighted by the cross examination of Belsito. After his cross examination, the next witness to take the stand was Kara Massotti, an acquaintance of Belsito. She was part of the group that tailgated with Belsito. Despite their short time together, she described him in good terms.

She said she was in shock by what she saw happen during Belsito's arrest and called the vibe by the deputies as "unnecessary". Massotti's appearance on the witness stand lasted only 30 minutes compared to hours by Belsito.

During the arrest, Belsito suffered a broken nose and a concussion. Charges against Belsito including disorderly conduct were immediately dropped by the Erie County District Attorney after reviewing the video.

Achtyl is currently suspended without pay while the trial continues. He faces up to a year in prison if convicted.