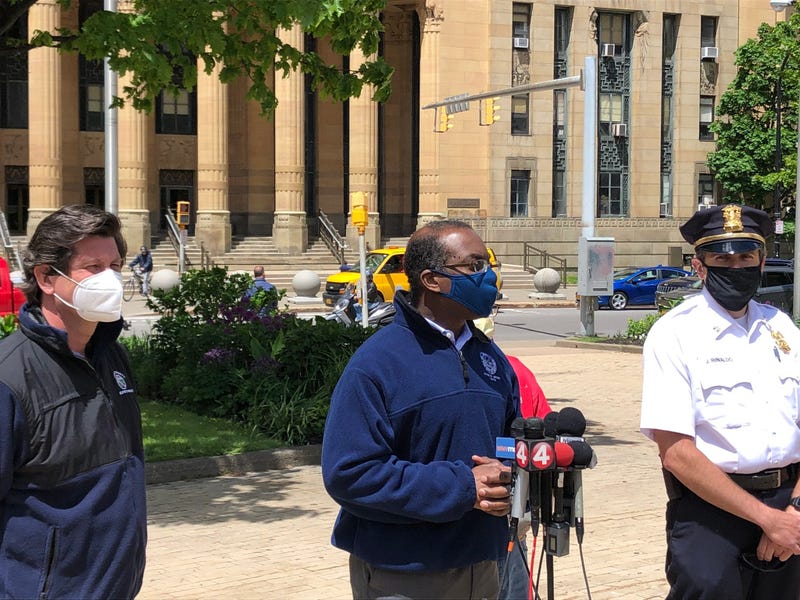 Buffalo, NY (WBEN) Officials from the City of Buffalo and Erie County spoke Sunday regarding the violence that erupted Saturday night in the city and suburbs following a peaceful protest downtown. Buffalo Mayor Byron Brown said that, "...most of the protesters were peaceful, and most of the protesters left early. Unfortunately there were those that stayed to vandalize things, to break windows, to loot, to do damage and to do harm."  Brown said that there will be a stepped up police presence Sunday into Monday throughout the city of Buffalo. “We have asked for State Police support, State Police will be coming in to provide support to municipalities in Buffalo and Erie County tonight." NY Governor Andrew Cuomo also stated that the National Guard will be on stand-by should they be needed to provide assistance to any state municipality.

Erie County Executive, Mark Poloncarz stated that there will be a county-wide curfew in effect from 9 p.m. Sunday through 6 a.m. Monday. Essential workers and businesses will be exempt from the curfew. Poloncarz said that there were, "...indications that there are individuals in our community, whether from our community or came from outside our community to be in the community during this crisis to cause problems tonight."

Erie County District Attorney, John Flynn noted that there were a total of ten arrests connected with the unrest Saturday, one of the individuals was a juvenile. Flynn also noted, “Just so you know, the majority, the overwhelming majority of the ten individuals who were arrested last night were white, they were not African-American." As for the potential for a repeat of the violence and vandalism, Flynn said that there was a Facebook post promoting a 'protest' at the Galleria Mall. Flynn said that the poster included his name, "...just so you know who you're dealing with, this individual is a person of interest in an Amherst hate crime that occurred on the opening day of Chanukah last December. So that's who you're dealing with."

Flynn also said that his office will be investigating many incidents last night in Amherst, Cheektowaga, and Kenmore. Investigations are also ongoing involving the fire started at city hall, a cameraman from Channel 4 who was struck by an object and the moset serious incident, where a 29-year-old woman was dragged from a car and beaten. The unidentified female is at ECMC with a serious head injury