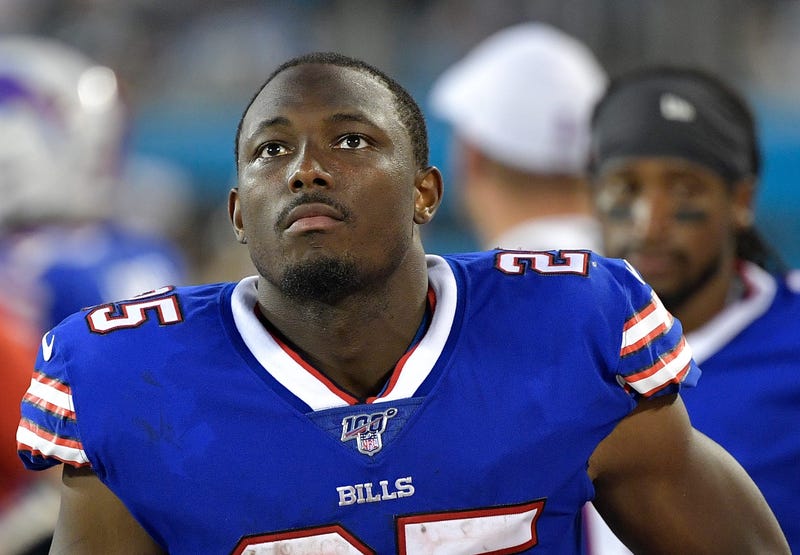 ORCHARD PARK, N.Y. (WBEN/AP) — Turns out the Buffalo Bills didn't agree with running back LeSean McCoy's assertion that he was still "the guy" in their backfield.

General manager Brandon Beane cited the emergence of rookie Devin Singletary and McCoy having to play a diminished role as key factors in the team's surprising decision to cut the 31-year-old Saturday when it established its 53-player roster.

Among other notable players cut by Buffalo were veteran cornerback Captain Munnerlyn, who was signed three weeks ago, and receivers Ray-Ray McCloud and Duke Williams.

Also, tight end Tyler Kroft was activated from the physically unable to perform list and placed on the active roster after missing nearly the entire offseason with a broken right foot.

The moves were overshadowed by McCoy's departure. The 11th-year player's 10,606 yards rushing rank 25th on the career list and fourth among active players. He is coming off his least productive season and proved to be the odd man out after Buffalo restocked the position this offseason.

Aside from selecting Singletary in the third round, Buffalo signed 36-year-old Frank Gore and T.J. Yeldon. McCoy was initially considered safe after Beane twice said he was still considered the starter.

What changed was Singletary's accelerated development and showing he could play a dual role as runner and receiver during training camp and the preseason.

Singletary finished with 42 yards rushing on 12 carries and added six catches for 46 yards.

"Devin's an unproven player in a regular season game, but we felt he had done enough and answered enough questions for us to make this decision happen," Beane said of the 5-foot-7, 200-pound player out of Florida Atlantic. "We felt he's ready to roll in some form or fashion for our team."

Beane left it to coach Sean McDermott and offensive coordinator Brian Daboll to determine the running back rotation and each player's roll for Buffalo's season opener at the New York Jets on Sept. 8.

In reaching the decision to cut McCoy, Beane said he made a few what he called "23rd-hour" attempts to trade the player.

McCoy was entering the final year of a five-year contract he signed after his acquisition in a trade with Philadelphia, where he led the NFL in yards rushing in 2013.

"I've seen that," he said, referring to trade speculation. "But for the last two years, people have been saying that. If that was the case, I would've been gone."

He also dismissed questions over whether he had lost a step.

"I know who I am. I know how I play. And my teammates know that. So I mean, we'll see on Sundays," McCoy said. "I'm the guy. I feel like that. That's what I've been told. And that's my every day approach."

McCoy had an inconsistent four seasons with the Bills. He struggled in his first year, finishing with 895 yards rushing. McCoy attributed that to being unfocused as a result of being traded.

McCoy responded by topping 1,100 yards rushing in each of his next two seasons. But he struggled last year when he finished with a career-worst 514 yards rushing and 752 yards from scrimmage.

Beane shouldered the blame for McCoy's struggles, saying it was the more the result of a patchwork offensive line and offense filled with unproven players.

"You can put some of that on me, probably a lot of it," Beane said. "I really thought LeSean earned the right to come back in here and compete. And I appreciate what he did up until today."

The Bills have announced the following roster moves and the team's roster now stands at 53 players: pic.twitter.com/KcPGn0hyUj

NOTES: Besides cutting 31 players, the Bills placed rookie LB Vosean Joseph (shoulder) and running back Senorise Perry (quadriceps) on injured reserve. ... Rookie LB Tyrel Dodson was placed on the reserve/commissioner exempt list. The NFL continues to investigate Dodson's arrest on domestic violence and disorderly conduct charges in May following an alleged altercation with his girlfriend at a nightclub in Scottsdale, Arizona.