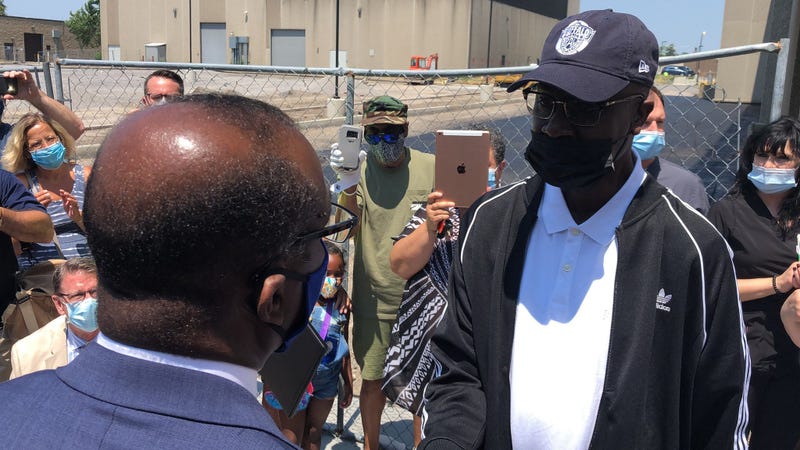 BUFFALO, N.Y. (WBEN) - Buffalo Police Officer Juan Phillips is at his home for the first time since March after a lengthy battle with coronavirus.

Phillips, a 38-year veteran of the Buffalo Police Department, was discharged from Erie County Medical Center on Thursday after battling coronavirus for more than 100 days.

"I'm a little overwhelmed," he said moments after he exited the hospital to a crowd of supporters. "It's been about 101 days that I've been inside. Being outside, for me - I'm just overwhelmed with the amount of love and the support that everybody has shown me."

Mayor Byron Brown: “Welcome home, Juan...you are an inspiration”Officer Juan Phillips was at ECMC for 102 days battling coronavirus and about a month on a ventilator. pic.twitter.com/aYDOHqRJFb

He began feeling symptoms of the disease shortly after the pandemic hit the Western New York area. Phillips first became tired and the disease evolved to attack his shoulders, left lung, and other parts of his body. He was one of the first people to be placed on a ventilator.

Doctors are still examining why the disease affected Phillips for so long.

"There were a couple of long nights where I actually said 'Why me?'," he said. "I quickly remembered to be thankful that my life was spared and I had a super, super, medical staff around me that gave me nothing but plus-attention."

Among the supporters cheering his discharge from the hospital on Thursday were current Buffalo Mayor Byron Brown and his predecessor, Anthony Masiello.

"Welcome home, Juan," Mayor Brown said as he embraced Phillips. "You are an inspiration."

"Juan Phillips was an exemplary police officer," Mayor Masiello said. "He had tremendous people skills. He knew how to talk to people and handle people. His legacy for his tenure in 38 years with the Buffalo Police officer will be one of distinction, admiration, and respect for people...He was next to me for seven years from 8 a.m. to 8 p.m. He helped raise our daughters and helped us through thick and thin. He's very loyal and, most importantly, a beautiful human being."

There is no definitive date for Phillips to return to the police force or if he even will. However, he said he wants to put the uniform on one more time.

"There's nothing more that I love than to serve the City of Buffalo as a police officer," he said.