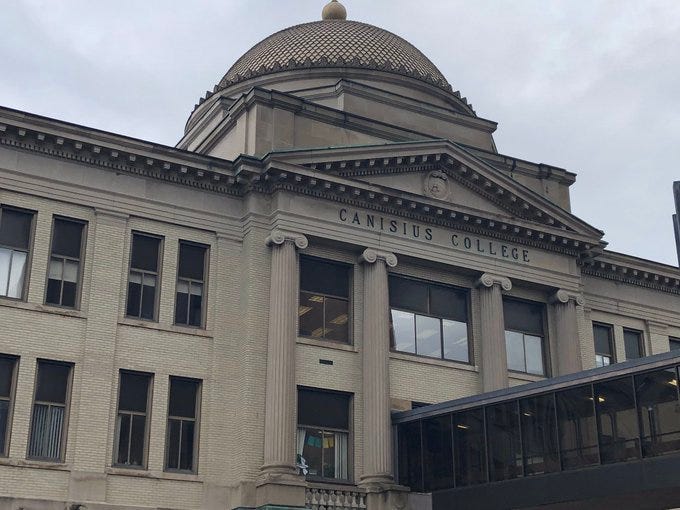 BUFFALO, N.Y. (WBEN) - Canisius College is requesting its 25 students who are studying abroad to return home in the wake of coronavirus.

However, Canisius College President John Hurley said most of the students have opted to stay in the countries that they are studying in.

"Their decision to stay is one they need to make in consultation with their parents," Hurley said Tuesday. "Our suggestion is that they take the opportunity now to come home. That's particularly the case with a couple of students we have in Florence in a program."

Hurley said they're not mandating students to come home because those students are in a contract with a separate school in the country abroad.

Canisius College officials are requesting their 25 students who are studying abroad to return home. Most opted to stay in the countries. No students are in China or Korea but there are some in Italy. pic.twitter.com/pSaNn21Fo8

"We had experience with this back in 2009 with the H1N1 virus and we had students on campus who contracted that strain of the influenza," Hurley said. "We saw what can happen when it hits the campus. We began several weeks ago to look and start thinking of contingency plans. This really elevated last week and we were in touch with our 26 Jesuit college and university peers across the country and it became clear to us...that universities were taking action to move forward, particularly to where they controlled the foreign site. At the end of last week, we knew we were going to be issuing some directives come Monday."

Canisius is prohibiting college-sponsored or related international travel to any countries designation by the CDC as a Level 4 or Level 3. Those countries include China, Italy, South Korea, and Iran. They are considering prohibiting travel to other countries, too. Hurley said summer trips are being planned and there hasn't been a final decision made on whether or not those trips will happen.