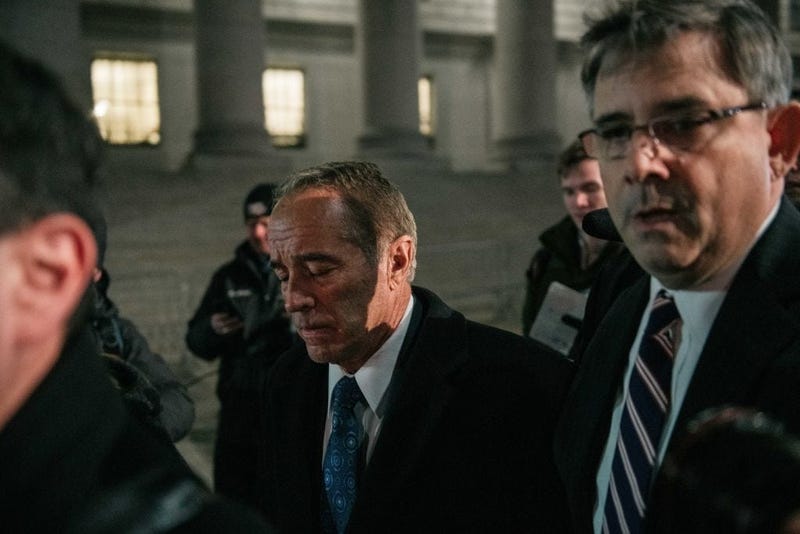 “I stand here today as a disgraced former member of Congress,” he said. “My life has been shattered.”

The sentence came even after Collins' lawyers argued he was sorry and should face no prison time in the insider trading case.

Prosecutors, however, argued he should go to prison for nearly five years. They said Collins and his son, Cameron, were worth a total of $35 million when they conspired to sell shares in a pharmaceutical company before devastating news was made public.

The trading, prosecutors said, enabled Cameron Collins and friends to dodge $800,000 in losses.

Collins' attorneys urged the judge for leniency, citing his contrition, advanced age, charitable works and a low chance that he would commit any more crimes.

“This is a sad and tragic day for Chris and his family,” defense attorney Jonathan Barr said. “He stands before you humbled, penitent and remorseful.”

Collins had represented western New York since his election to the state's 27th Congressional District in 2012. He resigned when he decided to plead guilty to a single conspiracy count, leaving the district's constituents without representation in Congress.

Prosecutors faulted Collins for campaigning for a reelection race he won after his arrest and then continuing to serve.

They said Collins learned that Innate Immunotherapeutics Ltd., whose board he sat on, had failed a drug trial when he received a telephone call while he attended the annual Congressional Picnic at the White House on June 22, 2017. Knowing that Innate's stock would plunge when news got out, Collins “from the White House lawn” tried to reach his son to tip him off so he could sell his shares, prosecutors said.

Prosecutors said he then conspired with family members to claim Cameron Collins and friends sold shares because they were spooked by a temporary halt in the trading of the stock rather than because they knew the stock price would fall 92% for the company headquartered in Sydney, Australia, with offices in Auckland, New Zealand.

Assistant U.S. Attorney Max Nicholas disputed the defense claim that the crime was the result of a tragic and emotional moment when Collins wasn’t thinking straight after learning the drug trial failed. The prosecutor noted there was a 10-month gap between his first crime when he called his son and the second when he lied to the FBI, which described as Collins “doubling down.”

"We do not agree this crime was emotional,” Nicholas said.

Broderick called it baffling that Collins would exercise such poor judgment when he and his son had the financial means to deal with any loss. “I have a difficult time reconciling that,” the judge said.

"It was a stupid, impulsive action that doesn’t make sense,” Barr, Collins' defense attorney, responded. “He really thought this company had something that was going to be a magic bullet for somebody with a really serious illness.”

Photos of former Congressman #ChrisCollins entering the federal courthouse in Manhattan. He was sentenced today to 26 months in prison. (Getty Images) pic.twitter.com/jnnqjzeGsy

Collins' legal woes began in August 2018 when he was accused by the government of tipping off his son, Cameron, about a failed drug trial that was meant to help those who suffer from multiple sclerosis. Chris Collins called his son multiple times while at the White House to tell him the news about the failed drug trial before information about it went public. Cameron Collins then dropped thousands of shares in stock with Innate and told his future father-in-law, Stephen Zarsky, about the failed trial. Zarsky then dropped all his shares.

Chris Collins has arrived at federal court to be sentenced in his insider trading case. pic.twitter.com/se7zbpdCWh

All told, the insider trading scandal allowed those involved to avoid more than $768,000 in losses.

Chris Collins did not sell his stock in Innate. At the time, Collins was already under investigation by the Office of Congressional Ethics in connection to his role with Innate.

When he arrived in Buffalo following his indictment, he told reporters that the charges were "meritless".

He was stripped of all committee assignments within the House of Representatives shortly after his indictment. In November, he won a re-election to his congressional seat and said he would be exonerated of the charges and fulfill his entire two-year term. He seldom held press conferences in 2019 but maintained his innocence.

Collins was never exonerated. He plead guilty to the crimes and resigned from congress on October 1. After becoming a convicted criminal, Collins left from the Western New York spotlight to his home in Florida.