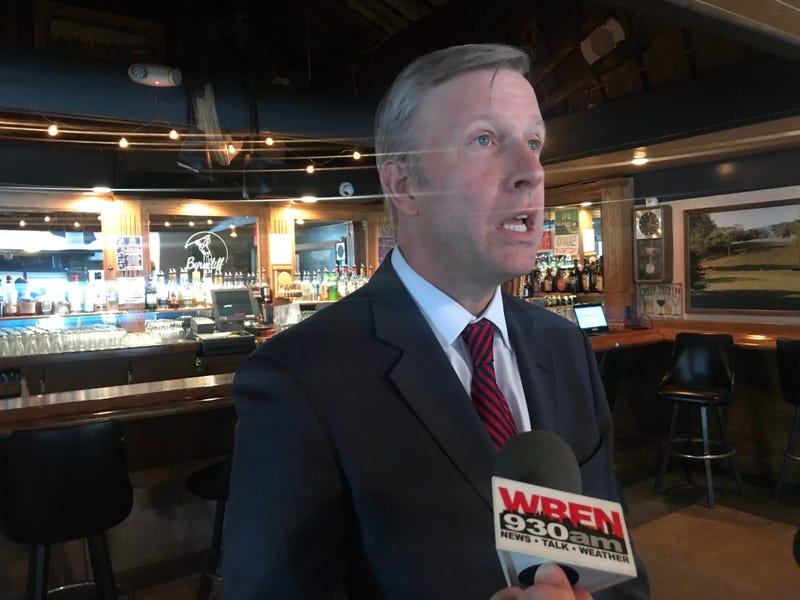 After a marathon meeting of eight GOP party chairs in Wyoming County, State GOP Chairman Nick Langworthy made the announcement late Saturday afternoon. "It is the decision of the county chairs to endorse State Senator Chris Jacobs for the 27th Congressional district."

Langworthy said there were many talented people that sought the nomination. But he said it came down to this. "It's an important time in our history and we need a steady hand at the wheel," he said.  "We need a voice to return to Congress and we've been without a voice for all of this time."

The decision came after a seven hour meeting. Langworthy acknowledging that it was a difficult decision. He said there was strong support for two of the candidates, but ultimately Jacobs had more votes.

"Chris is a proven leader and a proven winner," said Erie County GOP Chairman Karl Simmeth.  He said Jacobs will serve the position with dignity and honor.

What remains to be learned is which of the candidates on the outside looking in will persist and run in a June Republican primary race.  Jacobs had indicated he would likely not before he was named the candidate.  Ortt, Parlato and Mychajliw have each indicated they will consider all the facts, their options, and make a quick determination about their NY27 aspirations moving forward.

It is expected that Jacobs will run against Democrat Nate McMurray in a special election on April 28.  Governor Cuomo has not officially announced the election yet, but it is widely expected he will hold the election on the same day as the state Democratic Presidential Primary which is April 28.

Jeremy Zellner, Chairman of the Erie County Democratic Party was quick to respond to the Jacobs endorsement, saying, "I look forward to meeting with my fellow county chairs in the coming days to discuss the nomination of Nate McMurray and providing NY27 with the real representation it deserves."

It was a long day for the eight party chairs involved in the process, all of whom were behind closed doors until emerging with their decision late in the day.