In-Depth on WBEN: Listen To the 2020 Edition of 'I'm Listening' - Talk Has the Power To Save Lives 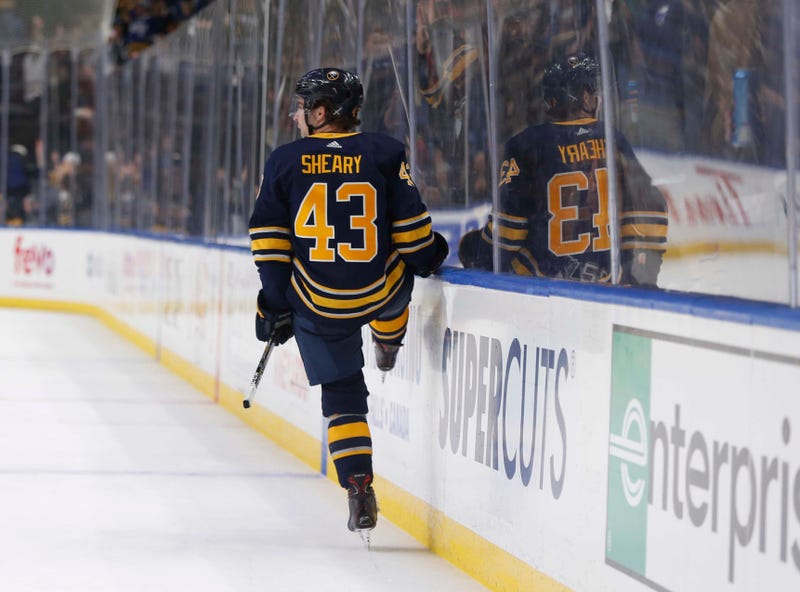 BUFFALO, N.Y. (WBEN/AP) — Conor Sheary scored his second goal of the game with 49 seconds left in overtime in rallying the Buffalo Sabres to a 4-3 win over the Pittsburgh Penguins on Friday night.

Sheary, acquired from Pittsburgh in a trade last June, also assisted on Brandon Montour's goal that tied the game with 2:32 left in regulation. Jack Eichel also scored and Linus Ullmark stopped 41 shots for Buffalo, which improved to 2-5-1 in its past eight.

Sheary's goal was allowed to stand after a review showed the Sabres were onside while entering the Penguins' zone.

The goal came after both teams traded chances at both ends. Sheary scored when he pounced on a loose puck, drove to the high slot and snapped a shot that beat Matt Murray over the goalie's right shoulder.

It marked Buffalo's second consecutive overtime win over the Penguins. The Sabres rallied from a 4-1 deficit to beat the Penguins 5-4 in overtime at Pittsburgh in November.

Sidney Crosby and Patric Hornqvist scored power-play goals 63 seconds apart late in the second period, and Nick Bjugstad also had a goal for the Penguins.

Murray stopped 26 shots as the Penguins dropped to 5-2-2 in their past nine, but earned a point to gain ground in a tightly contested race for the Eastern Conference's eighth and final playoff spot. Pittsburgh began the day in ninth with 74 points, the same as Carolina and one behind Montreal and idle Columbus.

Montour, playing in his first game in Buffalo since being acquired in a trade with Anaheim on Sunday, tied it when he knuckled in a shot from the blue line that beat Murray on the right, glove side.

Crosby's goal, which put Pittsburgh up 3-2 with 1:39 left in the second period, was the 439th of his career to move into a tie with Jaromir Jagr for second on the franchise list.

The Penguins were outshooting the Sabres 30-15 through the 17:25 mark of the second period, when Buffalo's Scott Wilson was issued a double-minor for high-sticking Marcus Pettersson off a faceoff in the Pittsburgh zone.

Hornqvist tied the game 53 seconds into the first penalty by deflecting in Justin Schultz's shot from the blue line.

Hornqvist then set up Crosby for the go-ahead goal. Drawing two Sabres defenders to him in the left circle, Hornqvist fed a pass through the middle to Crosby, who nearly lost his balance while one-timing a shot into the open side.

Despite the loss, the Penguins and Crosby continued their lengthy string of dominance over Buffalo.

As for Crosby, the Penguins captain has a point in 34 of 38 games against the Sabres — a stretch in which he has 20 goals and 39 assists.

NOTES: Sabres C Vladimir Sobotka is listed as day to day after sustaining an upper-body injury in 5-2 loss at Philadelphia on Tuesday. ... Sabres D Marco Scandella was out with a lower-body injury. ... Penguins D Erik Gudbranson made his team debut since being acquired in a trade with Vancouver on Monday. ... Penguins coach Mike Sullivan said D Brian Dumoulin (concussion) has begun skating on his own, but ruled out him and D Kris Letang (upper body) from playing in Pittsburgh's next game at Montreal on Saturday. ... Penguins RW Patric Hornqvist became just the second player selected last in the draft to appear in his 700th career game. He joined Kim Johnsson (selected 286th by Rangers in 1994), who played 739 games. Hornqvist was selected 230th overall by Nashville in 2005. ... Linesman Brad Kovachik worked his 1,500th career game.