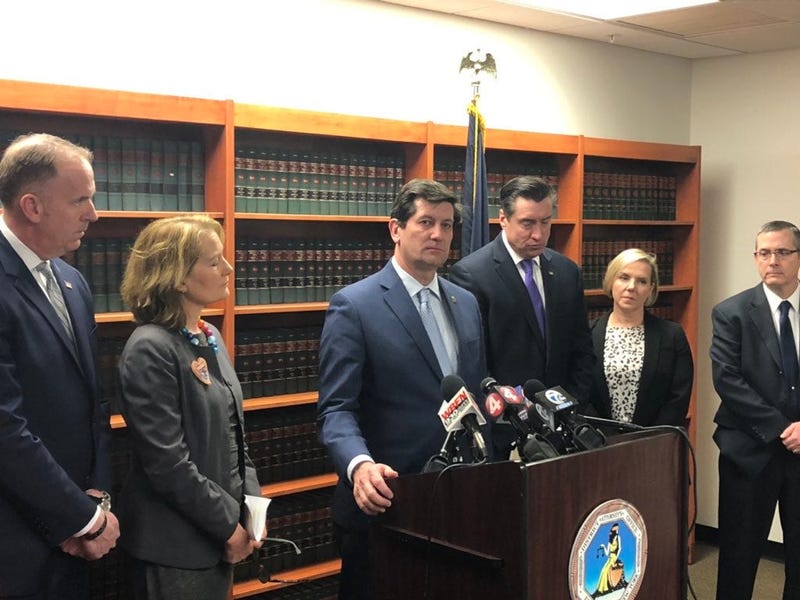 "This is a legitimate issue; sometimes peoples question if this is a real issue, human trafficking, is it something that actually occurs in our community," began Poloncarz. "We've identified that in 2018 there 115 youth that were connected with human trafficking and 67-percent of those were going through our child welfare system right here in Erie County."

Flynn discussed some of the ways in which trafficking has been addressed for a while, as well as some of the newer techniques being instituted by the county.

"A number of years ago, a human trafficking taskforce was established here in Erie County. That taskforce was primarily set up by the feds, the U.S. attorney's office took the lead in that program, and it incorporated a large number of members of law enforcement from the federal, state and local level," said Flynn. "Recently, I partnered with the Erie County Sheriff's Department, and we created literally a human trafficking unit here in the Erie County District Attorney's Office."

This unit is represented by a combination of several agencies and law enforcement offices such as the Town of Tonawanda Police Department, Amherst Police Department and the International Institute of Buffalo. These agencies have formed the Erie County Human Trafficking Unit, which "aims to enhance multi-disciplinary resources to implement victim-centered, collaborative approaches to identify victims of all forms of human trafficking and to investigate the prosecute their traffickers."

"Human trafficking is a criminal industry that often goes unnoticed, and I am committed to investigating all forms of this abuse and aggressively prosecuting these traffickers," said Flynn.

Another partnership, formed in 2013 through New York State, combines the Erie County Human Trafficking Unit, Erie County Department of Social Services and the Institute of Buffalo, and this partnership is known as "Safe Harbor."

"It's to try to assist individuals that are being processed through our Department of Social Services who may be victims of human trafficking," said Poloncarz. "We try to bring them back into normal society and give them the life that they truly deserve, from what unfortunately they've been dealing with."

Human trafficking exists in our region but our WNY Anti-Trafficking Task Force is working hard to eradicate this evil scourge. I'm proud to stand with them to announce new NYS funding for @ECSocServices Safe Harbor Initiative to help those being trafficked find a new life. pic.twitter.com/FXfAG3AgtC

The "Safe Harbor" partnership also seeks to spread awareness about the signs of trafficking, which was eloquently explained by Eva Hassett, who serves as the Executive Director of the International Institute of Buffalo.

For more information on human trafficking of minors or to report a case of possible exploitation, call the International Institute of Buffalo's Trafficking Victim Services at 716-883-1900 extension 323.

To anonymously report a tip to law enforcement about human trafficking, contact Buffalo Crime Stoppers by calling 716-867-6161, using their "Report a Crime" form on their website, or through the Buffalo Tips mobile app.