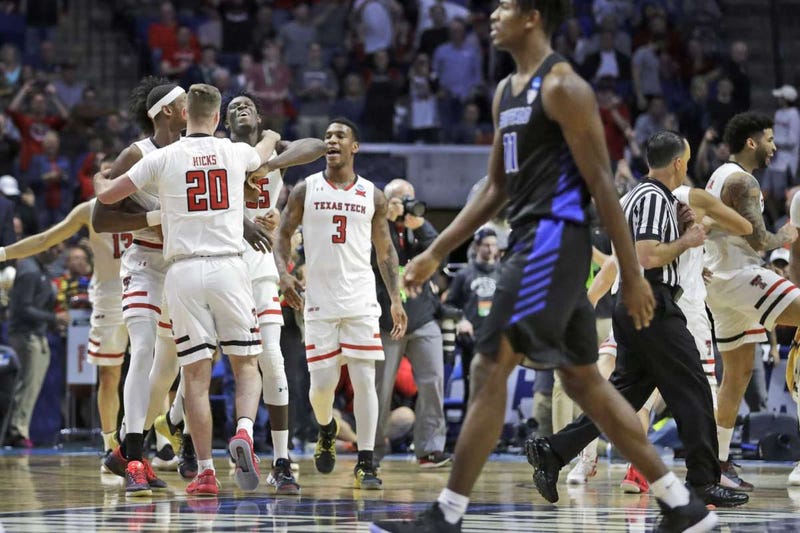 Jarrett Culver had 16 points and 10 rebounds as the third-seeded Red Raiders shut down Buffalo 78-58 on Sunday night.

Norense Odiase had 14 points and 15 rebounds, both season highs, for Texas Tech (28-6). The Red Raiders have won 11 of their last 12 games and made it to the second weekend of the NCAA Tournament in back-to-back seasons for the first time in school history.

"I'm glad to be a part of it, making history like that," said Culver, who also had five assists and three blocked shots.

The Red Raiders broke the game open with a 27-3 run over six minutes that spanned both halves. They'll face No. 2 seed Michigan next in the West Regional semifinals.

Sixth-seeded Buffalo (32-4) had won 13 in a row and was averaging over 85 points per game — fifth-best in the nation. The Bulls shot 36.5 percent in scoring a season-low 58 points.

"Our offense was not where it needed to be," said Buffalo coach Nate Oats. "We made some poor decisions. We turned the ball over on back-to-back possessions a few times. We had 18 straight possessions without scoring a field goal. That is the worse offensive performance of the year."

It was a repeat strong performance for the Red Raider — they stifled potent Northern Kentucky in the first round with a 72-57 victory.

"We tried to keep them out of middle as much as we could, to make them take tough shots and keep them off the boards," said Texas Tech coach Chris Beard. "I'm glad we were able to do that for 40 minutes. I've never been more proud of a team I coached."

Nick Perkins had 17 points and 10 rebounds for Buffalo, his second straight double-double. The MAC champions for the fourth time in the last five seasons, the Bulls were the highest-ever seed for the conference since the tournament expanded to 64 teams in 1985. Buffalo reached the NCAA second round for the second year in a row.

"Disappointed it ended like this, we wanted to go further," Oats said. "We won't let one loss define (us). We had an unbelievably successful year beyond what anybody could imagine happening here at Buffalo."

Leading scorer C.J. Massinburg, who averaged 18.3 points per game for the Bulls, had just two points in the first half and only four well into the second. He finished with 14, scoring 10 down the stretch when the game already was decided.

"It wasn't one thing in particular, just a credit to overall defense," Massinburg said of Texas Tech's defensive execution. "And I feel like we did get some good looks but they just didn't drop for us."

Buffalo took its only lead at 25-24 with 3:24 left in the opening half on Davonta Jordan's 3-pointer. Texas Tech responded by scoring the final nine points of the half and continued that dominance after the break.

"It was a big part of the game," Beard said of the turnaround. "The end of the first half was big."

Over the first 7 1/2 minutes of the second half, the Red Raiders outscored Buffalo 18-3 while the Bulls missed each of their first eight shots from the floor.

Texas Tech pushed its advantage to 62-33 when Brandone Francis' free throw capped off another 9-0 run with 9:15 remaining, and the Red Raiders managed to maintain at least a 20-point lead the rest of the way.

Buffalo: The Bulls struggled at the beginning, falling behind 6-0 and 10-2, making just one of their first seven shots. Buffalo's deficit grew to 19-6 after the first nine minutes, and at that point, the Bulls were being outrebounded 15-3. But led by Perkins, who scored their first eight points and 11 of their first 16, they were able to finally find their footing, and climbed back into it with a 19-5 run over the next seven minutes.

Texas Tech: All five Red Raider starters scored double-digit points, with Davide Moretti and Matt Mooney each getting 11 and Tariq Owens scoring 10, along with seven rebounds. Owens and Odiase were a combined 8-for-8 from the floor.

"We're not supposed to be here," Beard said. "They picked us bottom of the Big 12 (in a pre-season poll) and we haven't gotten much respect this year, but these guys have continued to keep a chip on their shoulder and just realize that we can do a lot of things if we play as a team."

Texas Tech advanced to the Sweet 16 and will take on No. 2 seed Michigan in Anaheim on Thursday.