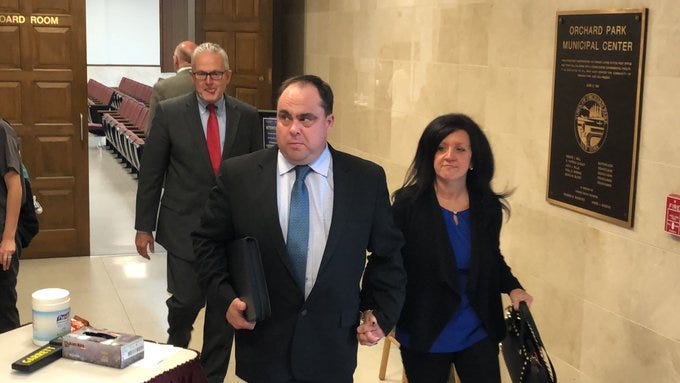 Achtyl is facing misdemeanor charges of assault, falsifying business records, and official misconduct. The charges stem from the December 3, 2017 arrest of Nicholas Belsito at a Buffalo Bills tailgate.

The defense continued to call up up witnesses, beginning day three of testimony by bringing up Achtyl’s partner, James Flowers. Flowers pointed out encounters with Belsito during the arrest of Belsito’s friend, Dylan Lowry, saying that there was “no doubt” that Belsito reached his hand in and deliberately stood in the officer’s way while Lowry was taken into custody.

When Belsito knocked on the patrol car door window and later swore at the officers, Flowers was seen in the video saying “nah-ah-ah” when Achtyl exited the car to arrest Belsito. He said the comment was directed to Achtyl.

He said he wanted to deal, instead, with Lowry, who was in custody.

As for the arrest of Belsito, Flowers described it as "the totality of circumstance". That's a statement that prosecutors took exception to after further cross examination regarding the paperwork associated with Belsito's charges.

After Belsito was taken into custody and en route to the Erie County Holding Center, Flowers and Achtyl discussed the charges against Belsito, which included criminal mischief, disorderly conduct, and obstructing governmental administration. All of the paperwork related to the charges signed by the officers began their narrative with the encounter Belsito had by knocking on the patrol vehicle window.

Prosecutors argued that because there was no mention of Belsito’s involvement in Lowry’s arrest in the paperwork, where the UB student was seen obstructing the officers by approaching them during Lowry's arrest and standing in the way of Flowers as Lowry was escorted to the police cruiser, it was unfair to call Belsito’s arrest the result of the total circumstances.

"I don't know if (Achtyl) did or didn't recognize (Belsito)," Flowers told prosecutors.

Flowers also said that he and Achtyl rushed their report due to time constraints.

"I reviewed them as much as I could," Flowers said.

Flowers said earlier this afternoon that when Belsito came to the door of the police cruiser, it created a safety concern because it divided their attention. He’s now talking about the charges against Belsito, which were later dropped after the video was made public. https://t.co/WwBHuE3n3r

While Achtyl is facing misdemeanors and Flowers is not, both will be part of a future civil trial against Belsito.

Before Flowers took the stand, prosecutors began the third day of the trial by attempting to introduce a new cell phone video that shows Belsito’s arrest on the ground. It was argued that the two-minute video could tell the full picture and prove to the defense and jury that the prosecution was not “cherry picking” evidence.

Defense attorney Rodney Personius argued that the video was irrelevant to the case because the alleged assault would have occurred before the video was taken. Ultimately, Judge Jorge DeRosa denied the evidence, saying it would be more likely to prejudice the jury than it would substantiate charges.

After the people rested their case, Achtyl’s attorneys sought a dismissal, saying that the video showed Belsito was swinging his arms at the time he was in an altercation with the deputy. The prosecution refuted this, showing a clip of Belsito’s hands at his side when bludgeoned in the face by the deputy’s baton.

Day three of the trial was concluded with Robert Hughus, a retired member of New York State Police and instructor at his own Brazilian Jiu-Jitsu company. Hughus teaches police departments around the state about defensive tactics and described the response by Achtyl during the arrest of Belsito at the side of the police vehicle as “in proportion” to the resistance Belsito put up.

Deputy Flowers finishes his testimony in the Ken Achtyl trial. Next, the defense brought forward Robert Hughus, a retired state trooper and BJJ instructor. He’s the expert witness on defensive tactics. He will likely be the last witness today. pic.twitter.com/OpB3VjuLy3

“There’s a checking motion that’s taught,” Hughus said. “It’s used to push or drive somebody backwards. It appears it was utilized in that manner.”

In what was a notable moment in the trial, prosecutors tried to have Hughus admit that de-escalation is a defensive tactic and something that could have been used at the "incident at the car window". As Marra tried to ask the expert about a lack of de-escalation tactics by Achtyl when Belsito approached the window, Personius successfully objected by explaining that the scope of Hughus' appearance revolved around Belsito and Achtyl's initial physical confrontation on the passengers side of the sheriff's patrol vehicle. Judge Jorge DeRosas would not allow prosecutors to ask Hughus questions about moments leading up to it.

Achtyl has not taken the stand after three days of the trial.