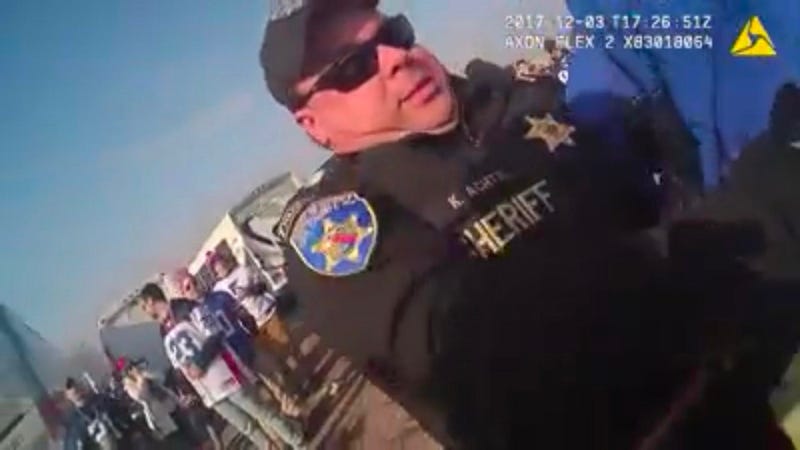 Achtyl stands accused of four misdemeanors after his encounter with Bills fan Nicholas Belsito in the bus lot outside of New Era Field in December 2017. Achtyl was charged with two counts of assault, official misconduct, and falsifying business records.

Nine total witnesses were called including three sheriff’s deputies, three tailgaters at the scene including Belsito, two experts, and a medical professional.

Achtyl did not testify in his own brutality trial.

Very curious why defense never brought up Achtyl to testify. Personius told us he can’t comment on that and he can’t speculate on how long Jury will take to deliberate.Closing arguments and jury deliberations start tomorrow morning. https://t.co/nJ61cnMKx0

His attorney, Rodney Personius, declined to comment on why he didn’t call Achtyl to the witness stand.

“I learned a long time ago that no one knows the case better than the lawyer in the courtroom trying the case,” WBEN legal analyst Paul Cambria said. “Rodney is a very excellent lawyer. If his judgement was that the prosecution has not proven their case beyond a reasonable doubt then the right thing to do is to rest and not to dislodge what he believes has already been established.”

Only a few of the nine witnesses were able to describe the incident at the car window where Belsito approached Achtyl and asked where Dylan Lowry, who was under arrest, was being taken. Belsito testified about the encounter as did witness Kara Massotti, who told Belsito not to approach the vehicle. Deputy James Flowers said in court earlier this week that he tried to stop Achtyl from getting out of the vehicle to arrest Belsito after he swore at the police officers.

Prosecutors tried on Wednesday to get defensive tactics instructor Robert Hughus to discuss why Achtyl didn’t use a de-escalation tactic when at the window. However, an objection by the defense over what Hughus was allowed to talk about was sustained by Judge Jorge DeRosas, meaning the expert could only testify on the physical encounter between Belsito and Achtyl on the passenger’s side of the police cruiser, not the encounter at the car window.

It’s unknown how long the jury will deliberate for.

“The moral of the story is you never know what’s happening in the jury room,” Cambria said.

If convicted, Achtyl could face a year in prison. Erie County Sheriff Tim Howard declined to comment until the end of the case.