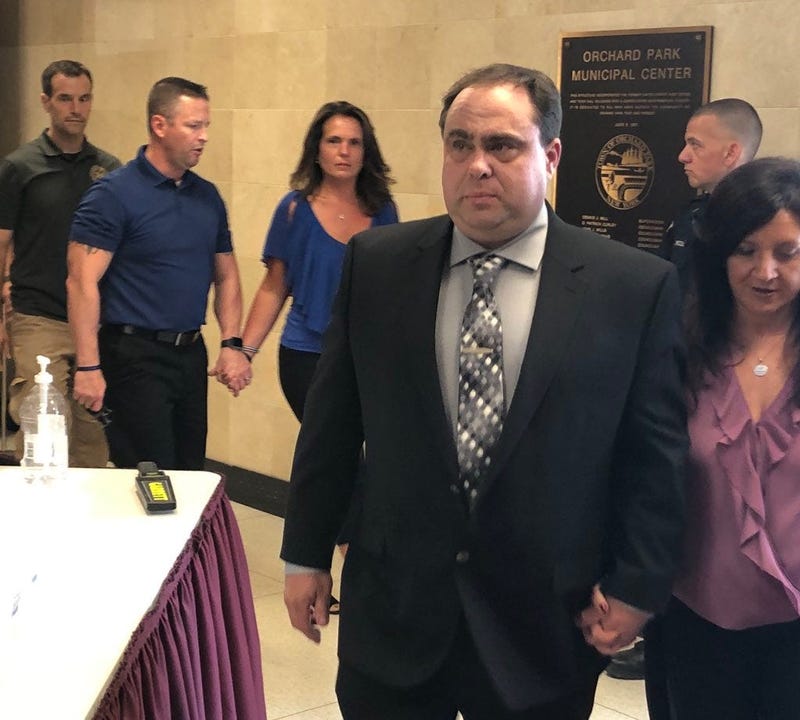 ORCHARD PARK, N.Y. (WBEN) - The defense has rested their case after day four of testimony in the trial of Erie County Sheriff's Deputy Kenneth Achtyl.

Achtyl is facing misdemeanor charges of assault, falsifying business records, and official misconduct. The charges stem from the December 3, 2017 arrest of Nicholas Belsito at a Buffalo Bills tailgate when Belsito tapped on the patrol car that was used by Achtyl and his partner, James Flowers.

The following sequence is the interaction at the car window, which you can also view in the video below.

"I'm sorry. I'm just wondering where you guys are going because I'm going to meet my friend there and like-," Belsito said to the deputies.

"Who's your friend?" Achtyl said.

"The kid in the back," Belsito said.

"Ok, well do you want to go to jail with him?" Achtyl said.

"Then beat it," Achtyl said.

"I'll go can you just tell me the location?" Belsito asked.

"No. What do you mean? Like iell me the location," Belsito said.

At this point, Belsito walked away from the vehicle.

"Beat it? You're the f*cking cops," Belsito said.

Achtyl then leaves the passengers side of the vehicle and arrests Belsito.

Day four of testimony began with the defense calling an undercover police officer who was in the bus lot where Belsito was arrested. The officer described the chaotic atmosphere among the crowd.

“It was the craziest game I’ve ever been to,” the undercover officer, who we will not identify in this story because he still does undercover work and had worries about name and face being public, said. “I saw a girl punch a horse in the face. I saw a guy jump off the bus.”

The undercover officer said Belsito's friend, Dylan Lowry, chucked three full beer cans at the officers, leading to his arrest. He also said he saw Belsito interfere with the arrest, though noted that nobody tried to arrest Belsito for his involvement.

“Watch this dude,” the undercover officer said to arresting officers on Belsito during Lowry’s arrest.

The undercover officer did not see the ensuing arrest of Belsito, a fact prosecutors pointed out.

Defense also called up Sergeant Timothy Dusza, who also noted the chaotic scene at the bus lot that day. He said the especially rowdy crowd may have been, in part, because the Bills were playing the New England Patriots.

Dusza, like the undercover officer, did not see the car window encounter between Achtyl and Belsito. However, he noted that any time a person approaches a police window, it “absolutely” causes a concern and said it’s especially dangerous when someone is in custody. Dusza cited past examples over his career of prisoners escaping when someone approaches a car.

Defense attorney Rodney Personius also brought up an expert witness who analyzed the dent to the passengers side fender of the police cruiser during Achtyl's arrest of Belsito. The final witness brought forth on Thursday was the director of nursing operations at the Erie County Holding Center, who gave details about the vitals of Nicholas Belsito when he arrived to jail.

Achtyl did not testify in his trial. He's currently suspended without pay from the Erie County Sheriff's Office. Sheriff Tim Howard was in attendance for three out of the four days of the trial and declined comment until after the verdict is read.

Closing arguments and jury deliberations will begin on Friday morning. A verdict could come then.

Achtyl faces up to one year in prison if convicted of four misdemeanors. His partner, James Flowers, was not charged with any crimes. Both Achtyl and Flowers will be defendants in a civil lawsuit that was filed by Belsito.