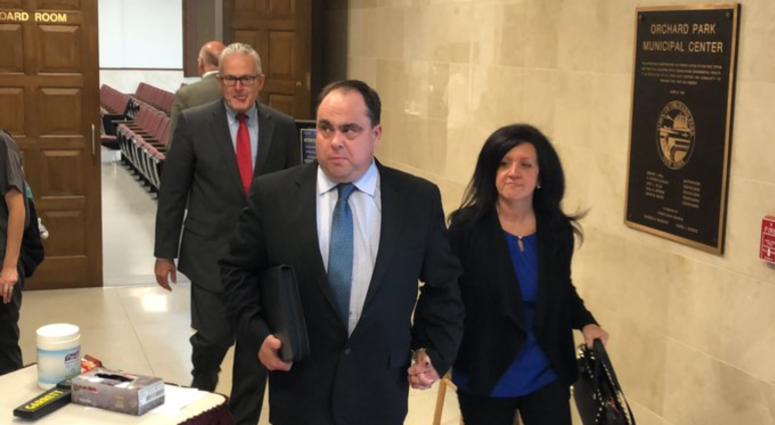 ORCHARD PARK, N.Y. (WBEN) - Erie County Sheriff's Deputy Kenneth Achtyl has been found guilty in his brutality trial after a December 2017 assault at a Bills tailgate.

Nicholas Belsito was arrested by Achtyl at a Bills tailgate after he swore at the officer over an interaction regarding where his arrested friend, Dylan Lowry, was being taken to. After Belsito was told to "beat it" multiple times, he walked away from the patrol car with Achtyl and Deputy James Flowers and swore at the police officers in the process. Attorneys on both sides said this was the straw that broke the camel's back.

It is not illegal to swear at a police officer.

Defense attorney Rodney Personius tried to argue that the jury should have looked at the entire circumstance leading up to the arrest. The chaotic atmosphere at the Bills game that day included beer cans being thrown at officers, with one hitting Achtyl in the elbow.

“The cursing wasn’t the reason for the arrest of Belsito,” Personius said. “It was the straw, not the bale.”

Prosecutors argued, though, that the lead-up to the incident at the car window had no significance in this case. Seven minutes passed between the arrest of Belsito’s friend, Dylan Lowry, and the initial approach to the window by Belsito.

“(Swearing) was (the straw),” Attorney James Marra said. “The curse set off the anger and rage of the defendant...You have the right to curse at police officers. You probably shouldn’t.”

Achtyl did not testify in his brutality case. Personius describes it as the “pink elephant” in the case and said that his client didn’t testify because he has confidence in the presumption of innocence.

Achtyl remains suspended without pay from the sheriff's office pending the result of sentencing.

Erie County Sheriff's Deputy Tim Howard was upset with the district attorney's office after the verdict because he believes there was a breakdown in communication.

Sheriff Tim Howard said there’s a breakdown in communication between the DA’s office and the sheriff’s department. He’s concerned the body camera footage was released BEFORE the trial.He reiterated his support for body cameras in future.Achtyl suspended pending sentencing pic.twitter.com/RdI1vyrnn8

Specifically, Howard was upset that the body camera footage was released publicly before the trial.

"When the district attorneys office have found fault with the performance of law enforcement, they have addressed it either at the time with the officers of with the officer's supervisors," Howard said. "The fact that this communication no longer exists and our own efforts to get them answered."

He said the body camera footage was released to a civil attorney.

Howard was in court for four of the five days of the trial.

"The police officers that watched this case don't know where it went wrong," Howard said. "I think the issue was who do they believe? Who would they have believed if these stories were called into question nearly two years later had all of those things been established as truth two years before."