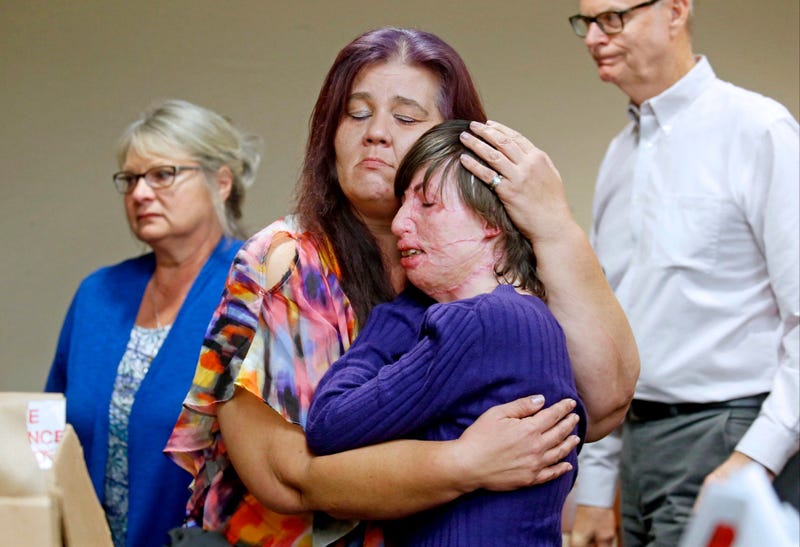 *WARNING: DESCRIPTIONS OF DOMESTIC VIOLENCE MAY BE UNSETTLING TO SOME READERS*

Cameron, 29, was in a toxic relationship with White for more than seven years before she left him and took their three children to live with her at her parents home. While working at a Tim Horton's in Tonawanda, White asked Cameron to see her by a dumpster out the back of the restaurant to talk about their kids and their relationship.

But it was all a ruse. White dumped gasoline that he put in an apple juice container over her head then used his lighter to set them both on fire. White quickly extinguished the flames on himself, but Cameron burned alive for more than a minute. She somehow survived and testified on Thursday that White told her that he was going to hurt her when they were by the dumpster.

White now faces up to 25 years in prison for his crimes when he's sentenced in January.

There were other instances of domestic violence, though. White also cut his own leg open and smeared his blood on her early in their relationship while constantly messaging Cameron during her prom that he was not allowed to attend due to his age. He also pushed her and pinned her on multiple occasions. White also blamed Cameron for his actions.

"I think (White's actions) were devastating," Family Justice Center of Erie County's Executive Director Mary Travers Murphy told WBEN. "To hear this is horrifying. It's complex. Nobody falls in love with a monster. Victims can fall in love with loving, charming, engaging, angelic people."

Murphy said all abusers seek power and control, as if someone "drafted a playbook on how to abuse." She also said that there is no way to fix a relationship involving domestic violence.

"These abusive relationship follow similar patterns in every case because the abusers follow it almost likes its a script," she explained.  "Victims are swept off their feet. They're incredible angels, not understanding how quickly it can turn abusive. Victims have to be broken down in a hundred million pieces emotionally, psychologically, sometimes financially, socially, and sexually. It's all about one person trying to control another aspect of a person's life."

She also said there is a group of dozens of survivors of domestic violence locally who shared similar stories of being brainwashed to believe it was their fault.

"The angel is the fake and the monster is the real person and you're never going to change that," she said.

Murphy hopes loved ones can recognize red flags in a relationship before it's too late. She said there are resources available on the Family Justice Center's website

"Victims tell me it took a friend or a concerned co-worker, even a boss, neighbor, or stranger to pull them aside and say 'I'm worried about your safety' and have a conversation with them about getting help," Murphy said.

In Erie County, domestic violence-related homicides have more than tripled since 2017. According to statistics from the district attorney's office, there have been ten homicides this year compared to three in 2017 and four in 2018.

"My first thought is with Jessica and bringing justice to her," District Attorney John Flynn said. "Now as a secondary benefit, I hope it brings further light to this horrible tragedy that we see each and every day and that those who are in domestic violence relationships know they can come forward for help before something happens."

Within his office, he has four attorneys who only work domestic violence cases.

Flynn said Jessica did the prudent thing by leaving White a week before the ambush, even though it was complicated because of their three kids.

"She is a hero here," Flynn said. "She, quite frankly, is in a position now where she could be a shining beacon for domestic violence victims, who can look at her courage and know that if she can handle it, if she can do that, I can handle it myself. I hope others get that message from her."

October is Domestic Violence Awareness Month and is associated with the color purple. Cameron and her supporters wore purple as a jury announced a guilty verdict against her abuser.