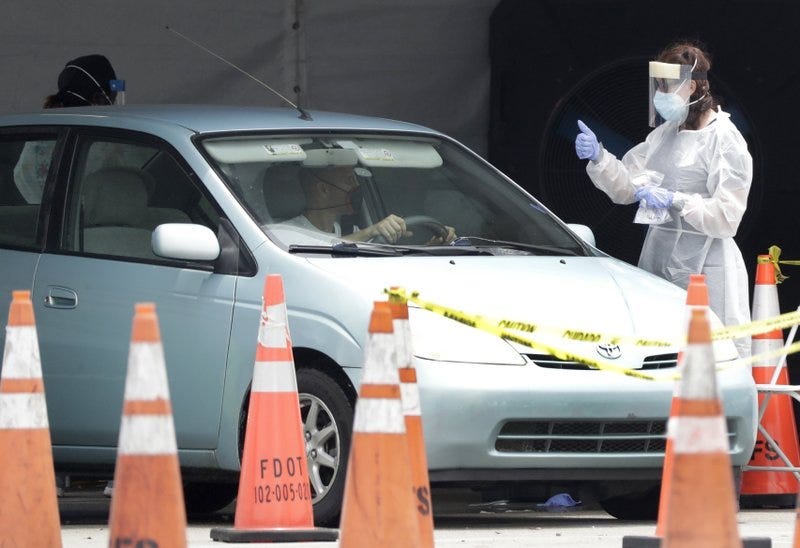 The order signed by DeSantis and made public Thursday also eliminated detailed requirements for when restaurant employees should be kept from reporting to work because of coronavirus concerns.

Early in the national outbreak, DeSantis, a Republican, ordered that travelers arriving in Florida from then-hard-hit New York City and its suburbs quarantine themselves for two weeks, giving them a lot of the blame for spreading the disease in his state. But New York’s statewide daily infection-rate has plummeted since late April and is now about one-tenth Florida’s even though the states have similar populations.

As cases shot up in southern and western states and decreased in the New York area this summer, Democratic New York Gov. Andrew Cuomo issued his own order in June, requiring residents in several states, including Florida, to quarantine upon arriving in New York.

DeSantis’ latest order also eased up the detailed requirements for when restaurant workers should be kept home. An earlier order had spelled out that restaurant workers should stay home if they were showing COVID-19 symptoms, had been in contact with an infected person, had traveled through an airport or been on a cruise ship in the past 14 days or had been ill with the virus but hadn’t had two negative test results.

The latest order replaces those details with language saying the state Department of Business and Professional Regulation should “ensure” restaurants have screening protocols that follow protocols from the Centers for Disease Control and Prevention.

Meanwhile, Florida on Thursday reported 7,650 new coronavirus cases. The state now has a total of 510,389 cases, second only to California, and at least 7,781 deaths.

It also reported 120 new deaths from the virus, bringing the seven-day average in reported daily deaths to 169. That’s down from a high of 185 deaths and below 170 deaths for the first time in a nearly a week. Florida’s rate of deaths over the past week is second only to Texas, and it’s third behind Mississippi and Arizona in per capita deaths.

Patients being treated in Florida hospitals for COVID-19 were down by about 270 cases from the previous day to 7,349 patients — more than 2,000 fewer than two weeks ago.

Florida also logged results of more than 100,000 tests for the disease, returning to levels of testing seen prior to the three-day shutdown of state-run drive-through test sites last weekend due to Tropical Storm Isaias.

Nine Democratic state senators on Thursday sent DeSantis a letter asking him to reconsider a push to reopen schools, saying “This is not the time for another premature victory.”

“What parent is prepared to play Russian roulette with their child’s life?” the letter said.

Besides reopening guidelines, Florida’s school districts also are debating whether to have extracurricular sports. At a news conference at the University of North Florida in Jacksonville, DeSantis said it was critical that sports are available to students. The association that governs high school sports has pushed back the start of any practices to the end of August, and it’s up to individual school districts to decide when athletics will return.

DeSantis, a former captain of the Yale baseball team, enlisted the help of two former professional athletes to make his case: Charlie Ward, a Heisman Trophy winner as a Florida State University quarterback who later played in the NBA, and former Philadelphia Eagles cornerback Lito Sheppard, who was twice selected to the Pro Bowl.

“I think just kind of hiding in the corner and pretending like if we just hide long enough, it’s just gonna go away, that’s not viable and I think that would have a lot of negative ramifications for our boys and girls who really are passionate about their sports,” DeSantis said.

The report from the U.S. Department of Labor noted that last week there were fewer layoffs in agriculture, construction, manufacturing, retail and service industries than the previous week.

Since the pandemic started in March, the Florida Department of Economic Opportunity has confirmed 3.2 million jobless claims and paid out $12.8 billion in benefits.