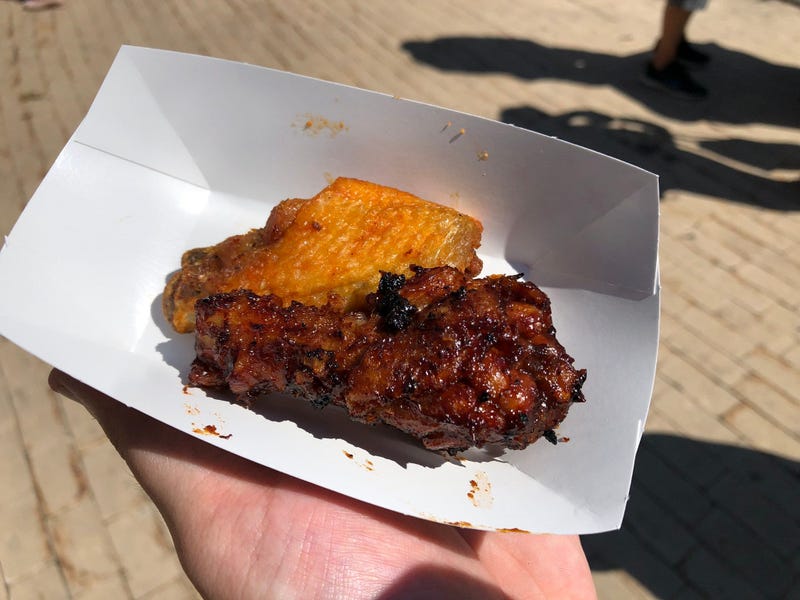 Buffalo, NY (WBEN) Taste buds salivated in Niagara Square Wednesday as preparations continue for the National Buffalo Wing Festival Labor Day weekend. Some major changes tastewide will be coming this year according to the Wing King.

The event will feature more than 25 local, regional, national, and international eateries, including 9 new eateries serving different regional sauces. Over 100 styles of chicken wings will be served as well as other festival favorite foods. But Wing King Drew Cerza says there will be for the first time a vegetarian wing. "The vegetarian population has doubled over the last 10 years to 7.3 million. Fifteen percent of millennials follow a plant-based diet. To adjust to these changing eating habits, the festival has invited local favorite, Root and Bloom Café to be on-hand serving their unique and popular vegetarian-style wings with both traditional medium and BBQ sauces. The product is jackfruit which has a meat-like texture in a breaded coating and goes through a double step frying process," says Cerza.

Cerza says the debate over which dressing to dip your wings will go head to head this year. "For years, this passionate debate has split the wing community.  Now the great debate will be going head-on.  This will be the first time in 18 years that the National Buffalo Wing Festival has opened its doors to ranch dressing, and we’re thrilled to have Hidden Valley Ranch spreading its cool and creamy flavor to wing fans in Buffalo," says Cerza. Ironically, at last year’s Wingfest, the “Best in Show Wing” was awarded to the Anchor Bar for its Habanero Ranch Dry Rub Wing recipe that included Hidden Valley Ranch Seasoning - this breakthrough served as the inspiration to serve up ranch dressing at this year’s event. A survey conducted in 2018 with over 2,000 people by the National Chicken Council showed that 59% of respondents preferred ranch to 35% for blue cheese.  Over the years, Wingfest has drawn in attendees from all 50 states annually. For years, attendees have been asking for ranch and this year it will be available.

Cerza notes Hidden Valley has announced a partnership with FeedMore WNY, to fundraise at the Wingfest. Their booth will be passing out free carrots and celery as well as ranch dressing for dipping while asking for donations from attendees to go toward feeding the hungry in WNY. Hidden Valley will also be matching all donations collected at their booth through the weekend.

The 2019 lineup of restaurants and eateries is shaping up to be impressive with 10 new restaurants coming from as far as Surprise, Arizona and London, England. Twenty-five food booths including 19 wing eateries will be serving over 100 different styles of wings as well as additional “Buffalo Style” favorite foods. The wing restaurants will compete in the annual National Sauce-Off Competition for bragging rights to the best wing sauces in America. The competition includes 8 different categories of wing styles including traditional medium, hot and extra-hot as well as creative, traditional BBQ, creative BBQ, creative sweet and creative spicy.

Admission is $5, with children 8 years and younger admitted free, courtesy of Fantastic Sam’s.

Food and beverages are priced separately.