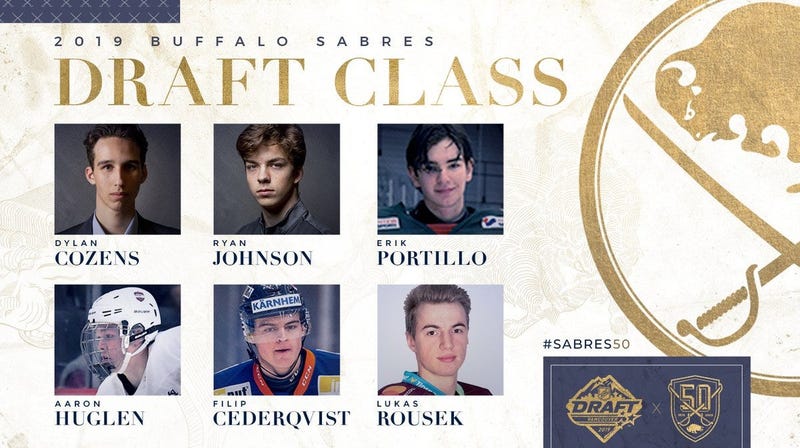 Vancouver (WBEN/WGR-Derek Kramer) - The Buffalo Sabres selected a goaltender with their third round pick, taking goaltender Erik Portillo 67th overall in the 2019 NHL Draft, followed by trading up to select winger Aaron Huglen

Portillo, 6'6"and 207 lbs., becomes the latest to join the Sabres goaltending pipeline, after the organization was dealt a blow with the surgery for Ukko-Pekka Lukkonen. Portillo had a 1.99 goals against average and a .931 save percentage in 26 games for Frolunda in Sweden's junior league.

Portillo is committed to play at Michigan University and has his USHL rights held by the Dubuque Fighting Saints.

The Sabres then moved up to select Huglen in the fourth round, moving up from 122 to 102 to select the Minnesota high school product. Huglen scored 52 points in 24 games for Roseau High School before playing for the Fargo Force in the USHL and tallying 14 points in 28 games.

Huglen is committed to play for the University of Minnesota, same as first round defenseman Ryan Johnson, in the 2020-21 season.

Cederqvist wound up starting out for the Vaxjo junior team in Sweden, scoring 32 points in 26 games before being promoted to Vaxjo's main club. Cederqvist had 8 points in 33 games with the main club in the SHL. Cederqvist is expected to remain oversas with Vaxjo next season. Buffalo traded picks 177 and 191 to move up to pick 143 to take Cederqvist.

The Sabres finished up their draft with the selection of Rousek, who is a winger for Sparta Praha in the Czech Republic. Rousek had 10 points in just three games for Sparta's junior team before being promoted to Sparta's main club, where Rousek tallied 9 points in 34 games.

The newest Sabres prospects will report for Sabres development camp, which will go from June 26th to the 29th.