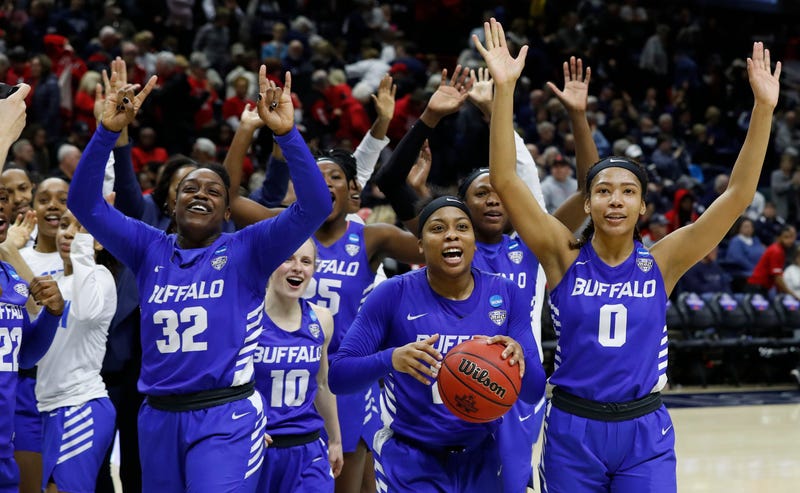 "I just want to have fun and have another day, I think that's what motivates me out of everything," Dillard said. "Playing for another day with my sisters and playing for the memories."

Stasha Carey had 20 points and 11 rebounds for Rutgers (22-10), which has been without head coach C. Vivian Stringer since late February because of an undisclosed medical issue.

The Bulls trailed by two points after the second and third quarters, but took control of the game midway through the fourth.

Hemphill broke a 69-all tie with five straight points, capped by a layup off a steal by Dillard.

They were up 76-71 with just over two minutes left when center Courtney Wilkens (nine points) fouled out.

But the Scarlet Knights, who outscored Buffalo 38-26 in the paint, could not capitalize. They had four turnovers and missed seven shots down the stretch.

The Bulls sealed the win from the foul line.

"I'm so fortunate to have a bunch of fighters who understand what they are fighting for," Buffalo coach Felisha Legette-Jack said.

The Scarlet Knights lost freshman guard Noga Peleg Pelc in the first quarter, when she went down at midcourt holding her left leg. Peleg Pelc, who had 14 points in the Rutgers' loss to Iowa in the Big Ten tournament, was helped to the locker room and returned to the bench later on crutches with her ankle in a brace.

They were already without guard Ciani Cryor and forwad Caitlin Jenkins, both of whom were dismissed from the team in February.

"There's definitely been a lot of challenges." Rutgers senior Stasha Carey said. "We've been through a lot that people don't know about, especially without our coach being here."

Buffalo: The Bulls are making their third NCAA appearance, all of which have come over the last four years. The Bulls upset South Florida and Florida State last year. They are now 3-2 in their short tournament history, despite having seven freshmen on this year's roster.

The Bulls made half of their shots, 27 of 54, and were 12 of 23 from 3-point range. That was despite Dillard. The nation's second-leading scorer at better than 25-points a game, was just 6 of 17 from the field. But she had six assists and four steals, including two key ones in the final minutes.

Buffalo fans had two reasons to celebrate on Friday. At the same time the women were advancing the school's men's team was beating Arizona State, 91-74, in a first-round game.