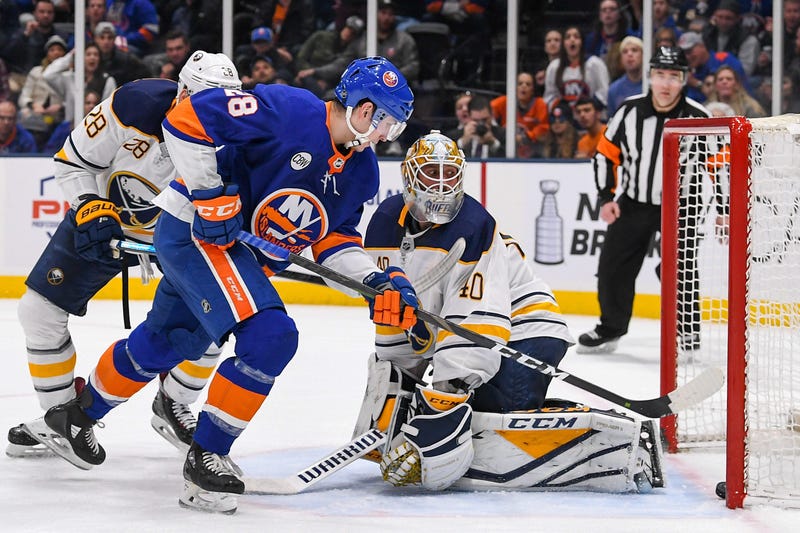 UNIONDALE, N.Y. (AP) — Jordan Eberle continued his scoring surge with another goal, Anthony Beauvillier added two of his own and the New York Islanders clinched a playoff berth for the first time since 2016 with a 5-1 victory over the Buffalo Sabres on Saturday night.

Michael Dal Colle and Ryan Pulock also scored for the Islanders, who have 99 points in their first season under coach Barry Trotz and secured a postseason spot in March for the first time since 1990. If the Islanders finish first or second in the Metropolitan Division, it would mark the first time since 1988 they would open a playoff series at home.

The Islanders, who have won four of their last five games, trail Washington by three points for the division lead and are four points ahead of third-place Pittsburgh. New York and Washington each have three games remaining, while Pittsburgh has four.

Buffalo's Victor Olofsson spoiled Robin Lehner's shutout bid with his first NHL goal on the power play at 13:28 of the third period.

Eberle opened the scoring at 7:41 of the first at Nassau Coliseum, tapping in a rebound after Sabres goaltender Carter Hutton initially stopped a shot by Mathew Barzal. Anders Lee also assisted.

The goal was the third in the last two games for Eberle, who has 18 overall this season. He had a three-point game — including the winning goal — against Winnipeg on Thursday, when the Islanders scored two late goals for a 5-4 win over the Jets.

Beauvillier made it 2-0 at 8:20 of the second, finishing off a sequence in which the Islanders kept the puck in the Sabres zone for an extended time. Beauvillier, who was denied on a penalty shot midway through the first, shot the puck from just inside the blue line to elude Hutton.

Dal Colle added his third goal of the season at 19:26 of the second before Pulock scored his ninth goal 30 seconds into the third to make it 4-0.

Beauvillier scored his second of the game and 18th of the season at 6:07 of the third to make it a 5-0 advantage for the Islanders.

Lehner, the former Sabre, made 31 saves to improve to 24-12-5 as he heard the crowd repeatedly chant his name. Lehner has been a revelation for the Islanders after they signed him to a one-year free agent contract last summer during which the Swedish netminder went through well-documented substance abuse and mental illness rehab.

The Islanders came out flying against the dreadful Sabres, outshooting Buffalo 16-8 in the first period. Hutton managed to stop Beauvillier on a penalty shot at 12:23 after defenseman Brandon Montour tripped the Islanders forward.

NOTES: The Islanders are 12-6-2 at Nassau Coliseum this season and were also 12-6-2 at Barclays Center in Brooklyn. ... The Islanders are 32-14-3 in their last 48 games and 7-2-2 in their past 11 games overall against the Sabres. ... The Islanders scratched defensemen Thomas Hickey and Luca Sbisa, plus forwards Tanner Fritz and Ross Johnston. ... Buffalo scratched defensemen Zach Bogosian, Matt Tennyson, Jake McCabe, Matt Hunwick and Rasmus Ristolainen, plus forwards Evan Rodrigues and Vladimir Sobotka.