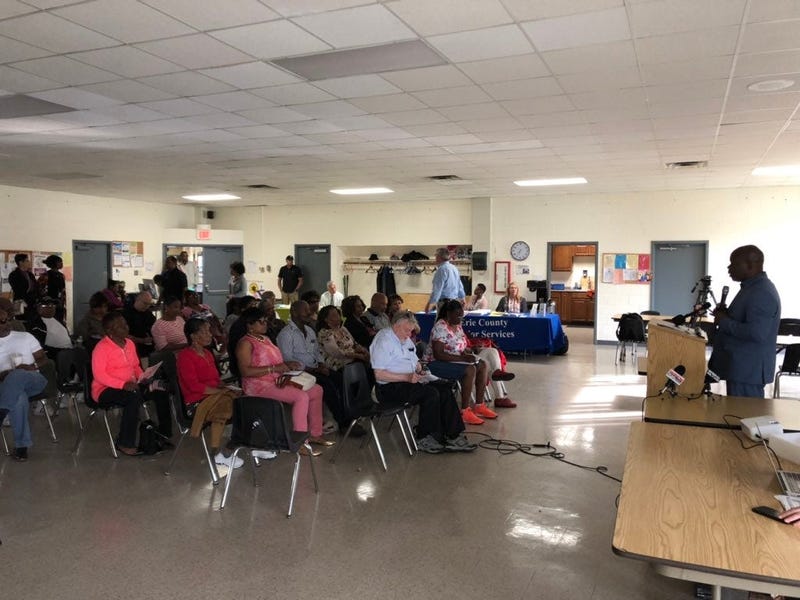 BUFFALO (WBEN - Brendan Keany) - On Wednesday evening, Erie County Legislator Howard Johnson held a public meeting to discuss some of the safety and health initiatives taking place in his district.

The main focus of this meeting was the "cancer cluster" that was found in the area stretching from the East Side of Buffalo to the western portion of Cheektowaga, which was one of four areas in New York that the State Health Department found to be peculiar.

"Every single case, in theory, of cancer in New York State goes into a big database, a registry," said Ben Swanekamp, the health policy director of Erie County. "So, the state has all of this information going back decades about every single case of cancer, and they can take this data and overlay it to see if there's anything kind of funny going on in certain geographic areas. What they found is that, in these four areas, there were unusually high rates, beyond the average, and in some cases surprisingly beyond the average rates, of certain cancers."

In the geographic area specific to Erie County, there were six specific types of cancer that are considered to have unusually high rates - colorectal cancer, esophageal cancer, kidney cancer, lung cancer, oral cancer and prostate cancer.

Right now, a study is being conducted by the State Health Department, and Swanekamp says they're basically looking at the cancer registry, environmental data from the DEC - which includes a wide array of soil, water and air testing - and they're also looking at the demographic information of the community in an attempt to cross reference that information and package it into one report expected in the coming months.Johnson noted that it's difficult to provide anything completely substantiative to the community without the results of the full report, but the meeting was an attempt to keep the community informed and remain as transparent as possible.

"The purpose of gathering was more from an informational position - what the county wanted to do as a proactive approach and how we're addressing it," said Johnson. "What we're waiting on is the state study to come, and when the state study comes, then we will have more information, but right now we don't have the state study. But, there's a comprehensive approach the county is funding for, there's an RFP process that will be announced in a couple of weeks, and once that ends, then we'll have the educational piece that goes out to the affected communities so they know how to address those issues."