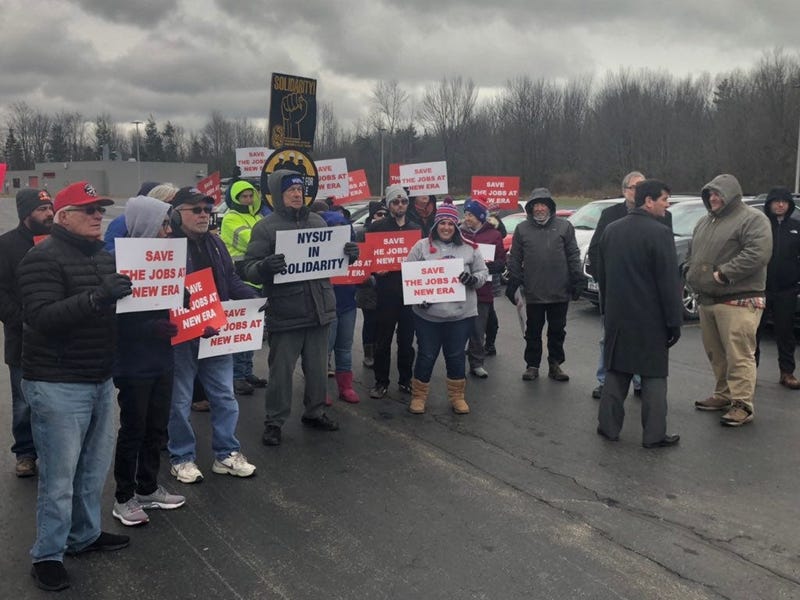 Mark Poloncarz was joined by labor advocates across the street from the New Era plant in Derby in another attempt to urge the company to keep these jobs in Western New York. pic.twitter.com/wJmoftIXKI

"If I can say something to the workers who are leaving here right now, I know they can't say anything; they've been told if they do, they're going to get fired, but we've got your back!" said Poloncarz with a cheer from the protesters in the background. "We do have your back because you've been the support that built this company."

Richard Lipsitz is the president of the Western New York Area Labor Federation, and he says this decision goes beyond the 219 workers New Era intends to lay off in March and will have a much larger impact than people realize.

"We're calling upon the Koch family [owners of New Era> to change their mind, to negotiate with CWA at the plant, and to continue to make hats for the domestic market right here in Derby, New York," said Lipsitz. "They are hurting the workers in the plant, they are hurting the Township of Evans, the Hamlet of Derby, and the Lakeshore School system."

However, unfortunately for the workers and their families, Poloncarz says that no recent talks have been initiated between local officials and Christopher Koch to discuss the potential of keeping the plant in service.

sports
Legendary story about Akiem Hicks drinking 40 beers resurfaces on 'Monday Night Football'
music
This Whitney Houston classic is the latest to hit 1 billion views on YouTube
music
Ally Brooke on her new book and the parts of Fifth Harmony that made her 'uncomfortable'
music
RADIO.COM's Friday Night Takeover with Jon Pardi
news
Taco Bell announces the return of fan favorite Cheddar Chalupa
music
Maren Morris reveals why she voted for Biden and why she says it's time to 'fire' Trump