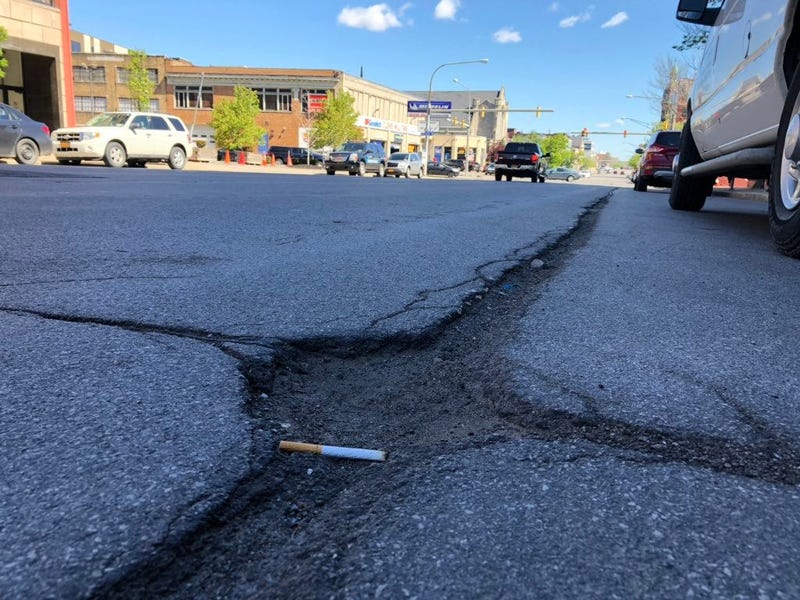 BUFFALO, N.Y. (WBEN) - There will be a six-month push to fund municipal infrastructure needs in New York State.

"Rebuild NY" began their campaign on Thursday at the corner of Main and Best Streets in Buffalo. Officials said this locally-maintained roadway is one example of roadway, among hundreds if not thousands, that need to be better maintained by government.

"While the city was able to do a patch and resurfacing job this summer, they haven't addressed the signal systems, the intersections, and sidewalks for the youth using the (nearby) facilities," Gary Hill, President of the Union Concrete Construction Company in West Seneca. "This is what we need to address in this upcoming five-year plan."

"Just in Buffalo alone, we estimate that these roads in the urban areas need about $175 million investment over five years," Hill said. "That's roads like Main Street, they're talking about $35 million to bring this three-mile stretch up to standards that this city needs and should have. You have Clinton Street out in the East Side that is in horrendous condition. It's more of a heavy industrial area."

He also said South Park Avenue is another key area that needs upgrades.

"This is common throughout the state," Hill said.

New York State Senator Tim Kennedy, who is also chairman of the state's transportation committee, said he will support their push for increased funding on local infrastructure projects.

"It is a change of the mind and change in the philosophy that we need to make down in Albany and in Washington," Kennedy said. "We have to get people recognizing that the urban communities, aging and older infrastructure, and areas that have the most population utilizing the roads and the bridges need a critical investment but also along those same lines, the areas, especially upstate, who receive the most inclement weather in seasons (need funding)."

For decades, there has been a push for increased funding on infrastructure. Hill said this push is different because of its focus on local roads instead of big state projects.

The annual state budget will be decided on April 1, around the time the coalition's push will end.