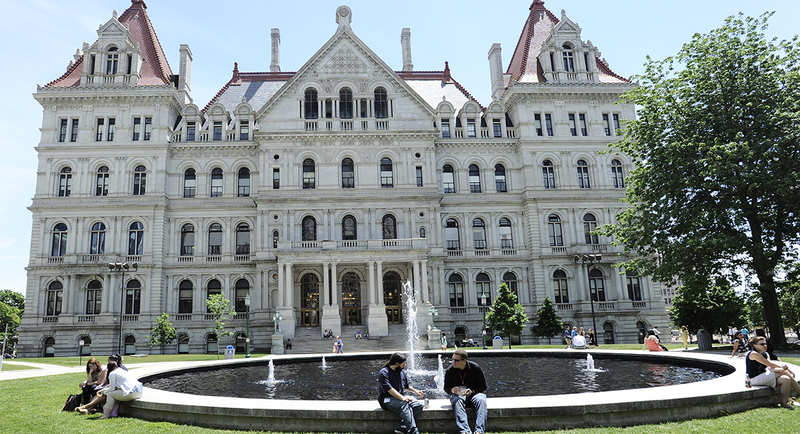 ALBANY, N.Y. (WBEN/AP) — New York lawmakers are kicking off their 2019 session, a six-month work period expected to be dominated by debates about marijuana legalization, congestion tolls in Manhattan and making it easier to vote.

The work gets under way Wednesday when members of the Senate and Assembly convene in the state Capitol.

In the Senate, Andrea Stewart-Cousins will formally take over as leader following big Democratic gains in last fall's elections. The Yonkers Democrat is the first woman to lead a legislative chamber in New York.

Democratic control of both chambers has raised the prospects for several bills that were blocked by Republicans when they held the Senate. That list includes a bill that would give child molestation victims more time to sue their abusers and another that would eliminate cash bail.

Despite the Democrats' lock on power, negotiating key details to several proposals will be difficult.

While there's broad support for legalizing marijuana, for example, lawmakers don't yet have agreement on several thorny details, such as how many retail establishments to permit or how high the taxes on the product will be.

Cuomo wants to include marijuana legalization in the state budget, due by April 1, a remarkably short time frame for such a complicated issue. Regardless of what form legalization may take, many lawmakers want a phased-in approach similar to the one adopted in Massachusetts, where personal possession and cultivation of marijuana were legalized long before the first retail shops were allowed to open.

Assembly Speaker Carl Heastie and many members of his chamber want lawmakers to also consider expunging the criminal records of thousands of people who were arrested for using the drug — a proposal that could complicate legalization even further. Officials say they also want to examine the experiences of states that have already legalized the drug.

Approving new congestion tolls for New York City will be just as challenging. Supporters, including environmental groups, transit advocates and even local chambers of commerce, argue that new surcharges on vehicles entering the busiest parts of Manhattan are the best way to discourage driving while raising billions to repair and modernize the city's subways. Gov. Andrew Cuomo supports the idea. But the details — how high will the toll be, will local commuters and small businesses get a discount? — could undermine the push.