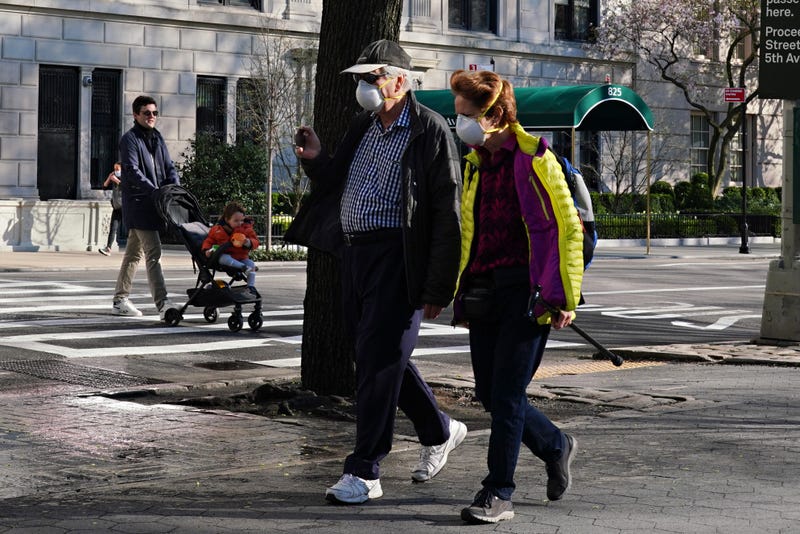 Albany, N.Y. (WBEN/AP) - New York state posted a record-breaking number of coronavirus deaths for a third consecutive day even as a surge of patients in overwhelmed hospitals slowed, while isolation-weary residents were warned Thursday the crisis was far from over.

The number of deaths rose by 799 to more than 7,000. Gov. Andrew Cuomo described the death count as a lagging indicator reflecting the loss of people sickened earlier in the outbreak.

Cuomo and New York City Mayor Bill de Blasio have been navigating the cross-currents of hopeful and horrible news in recent days. Deaths are spiking, yet new hospitalizations are slowing. Light is at the end of the tunnel, but New Yorkers are being warned not end their weeks of isolation just yet.

Both leaders, at successive briefings Thursday, used the same metaphor that New York was not “out of the woods” yet.

De Blasio said New York City needs continued social distancing plus more coronavirus testing capacity to reach a point at which the loosening of restrictions could be considered.

“If we really work hard we have a chance of seeing change in May or June,” de Blasio said at a City Hall briefing.

Starting Monday, the city will release ongoing data on three key virus indicators: the number of people admitted to hospitals and suspected of having COVID-19; the number of intensive care unit admissions for the disease; and the percentage of coronavirus tests that come back positive, de Blasio said.

All three numbers would have to go down in unison for 10 days to two weeks before the city could consider loosening social distancing restrictions, he said.

But in order to contemplate returning to anything approaching normalcy, he said, the city would also need to be able to test more people for the virus.

“We need some greater capacity,” he said. “I think the federal government is still the most important part of this equation when it comes to testing.”

Other developments in New York in the outbreak:

The state is delaying pay raises for about 80,000 state workers for three months as it deals with the loss of up to $15 billion in revenue from the outbreak-related economic downturn.

The move is expected to save about $50 million for the state, which will see if the raises can go into effect later, said Division of Budget spokesman Freeman Klopott.

Cuomo said Thursday he had two choices: layoffs or a pay freeze.

But the state’s largest public workers union is calling on New York to respect workers who are providing essential services in a crisis.

“It’s inexcusable to require our workers to literally face death to ensure the state keeps running and then turn around and deny those very workers their much-deserved raise in this time of crisis,” said Civil Service Employees Association President Mary Sullivan.

Cuomo’s administration had previously said it wasn’t clear on whether face masks are effective.

The Centers for Disease Control and Prevention already recommends cloth face coverings in public settings where social distancing measures are difficult to maintain, as do New York City officials.

The state’s guidance released Wednesday cites recent studies about the significant number of asymptomatic individuals with COVID-19 who are spreading the virus by even just speaking near others.