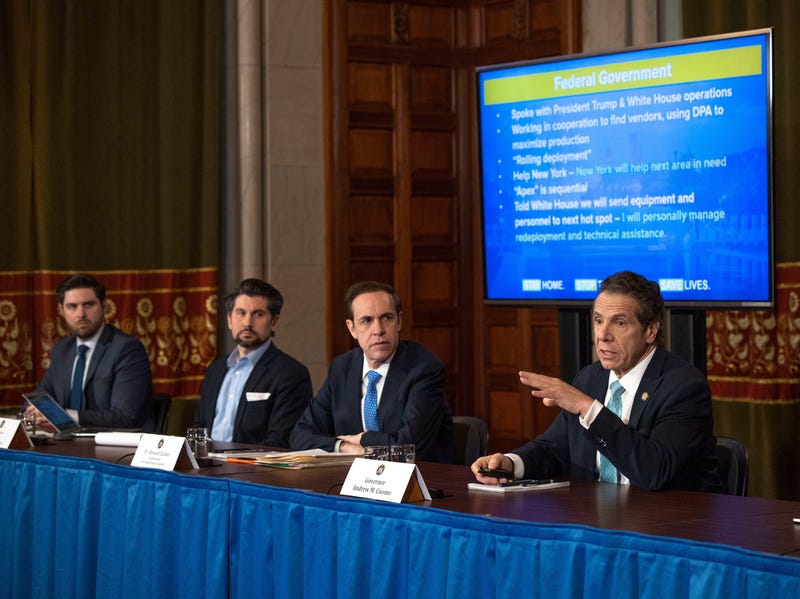 Albany, NY (WBEN) New York state’s death toll from the coronavirus outbreak climbed Sunday above 1,000, less than a month after the first known infection in the state.

Most of those deaths have come in just the past few days.

New York City reported in the evening that its toll had risen to 776. The total number of statewide deaths isn’t expected to be released until Monday, but with at least 250 additional deaths recorded outside the city as of Sunday morning, the state’s total fatalities was at least 1,026.

The virus and the disease it causes, COVID-19, has torn through New York with frightening speed.

In Erie County, 414 cases of coronavirus are confirmed and there are seven death attributed to the virus.

Our @ECDOH informs me there are 414 confirmed positives cases of #COVID19 in Erie County, 375 of which are active cases. 32 people have recovered, and unfortunately we have another death, bringing the county total to 7.The Town of Newstead also has its first confirmed case. pic.twitter.com/eJZ9k9eGeF

Cuomo also announced that the NY PAUSE program will be extended until at least April 15th meaning that all non-essential workers must stay home and work from home if possible. Cuomo said that the program would be re-evaluated every two weeks, "I think it's not even questionable today, but that we're going to need two more weeks of non-essential workers."

The Governor also noted that 76,000 volunteers have stepped up to help in the effort to combat the virus and he also praised the work of first responders, "These public people, I don't even have the words to express my admiration for them. FDR always had words. Courage is not the absence of fear, but rather the assessment that something else is more important than fear. To me that says it all today. Everyone is afraid. Everyone is afraid. You think these police officers are not afraid to leave their house? You think these nurses are not afraid to go into the hospital? They're afraid. But, something is more important than their fear, which is their passion, their commitment, for public service, and helping others."

Meanwhile, new data is showing which parts of the city are being hit the hardest by disease and that nearly a quarter of the people who’ve died of coronavirus in the state were nursing home residents.

Here are the latest coronavirus developments in New York:

Coronavirus is overwhelming some of New York City’s poorest neighborhoods, according to new data released by the city.

Queens accounts for 32% of the city’s more than 30,000 confirmed cases as of Saturday — more than any other borough.

Neighborhoods such as Jackson Heights, Elmhurst and Corona, which are generally poor, densely packed and have large non-English speaking populations, have been among the hardest hit, according to a city map showing percent ranges of people testing positive for the disease, also known as COVID-19. In those areas, between 69% and 86% of the tests done have come back positive.

A hospital in Elmhurst has been overrun with coronavirus cases. One day last week, 13 hospital patients with the virus died.

Statistics on coronavirus cases do not reflect everyone who may have the virus, because many people have been told to manage their illness at home and are not getting tested.

The number of patients being discharged at the state's hospitals after they've been treated for coronavirus has increased daily to a high of 845 on Saturday, Cuomo said. In all, more than 3,500 people have been discharged.

As of Sunday, more than 8,500 people remain hospitalized across the state because of the disease, including more than 2,000 in intensive care. In New York City, about 20% of coronavirus cases have led to hospitalizations.

Those totals are continuing to spike, but Cuomo said they're not multiplying nearly as quickly as they were last week. From March 16-19, the number of hospitalizations in the state doubled every two days. Now it's taking about six days for the number to double.

On Saturday, after saying he was weighing the idea of a mandatory quarantine for New York, New Jersey and Connecticut, President Donald Trump tweeted that instead he’d issue advisory urging people in those states to avoid any nonessential travel for two weeks.

New York City Mayor Bill de De Blasio said he worried about the advisory’s impact on families with members in New York and other places who were looking to reunite.

“We’ve got to respect, in the middle of a crisis, families have a right to be together,” de Blasio said.

All 50 U.S. states have reported some cases of the virus that causes COVID-19, but New York state has the most, with over 52,000 positive tests for the illness and more than 700 deaths. About 7,300 people were in New York hospitals Saturday, including about 1,800 in intensive care. DWINDLING SUPPLIES, MANPOWER

Mayor Bill de Blasio on Sunday reiterated his fears that without reinforcements the city will run out of masks, gowns and other hospital supplies in a week and ventilators sooner.

With the expected peak of cases in the city still two to three weeks away, de Blasio told CNN’s “State of the Union” on Sunday that the city also needs new waves of doctors, nurses and other medical personnel.

Cuomo said Sunday that more than 76,000 doctors, nurses and other health professionals, including many who've recently retired from the field, have volunteered to help in the coronavirus fight.

Through Friday, 24% of coronavirus deaths in New York state were among nursing home residents, according to the state Department of Health figures released to The Associated Press.

The state said there were more than 740 confirmed COVID-19 positive cases in licensed nursing homes at 129 of the state's 613 nursing homes, which serve more than 100,000 residents.

As of Friday, 122 nursing home residents in the state have died of the disease. In less than two weeks, the virus has claimed seven lives at one Long Island retirement community, with the latest death coming Saturday.