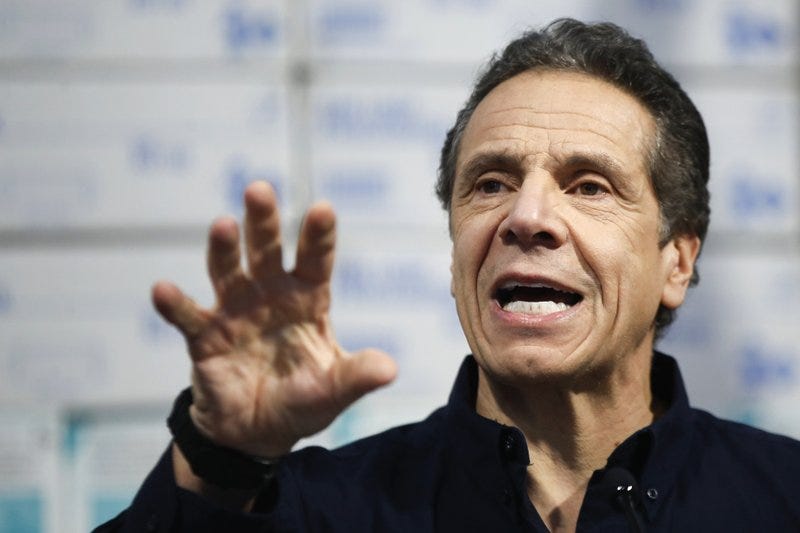 ALBANY, N.Y. (WBEN/AP) — As New York navigates the coronavirus crisis, Gov. Andrew Cuomo and lawmakers are trying to find their way forward on a state budget despite uncertainty about the size of the financial toll the outbreak will take.

"These are extraordinary times for the state," said Assemblyman Sean Ryan (D-Buffalo). "Last night we passed three budget bills, the most important of which is the revenue bill. Getting to the revenue number was a real bear because everyday the economic forecast in New York State changes to the negative, and we have to continue to make cuts," he said.

Assemblyman Angelo Morinello (R-Niagara Falls), said details have not been shared with the minority conference.  "I have not seen any numbers," he told WBEN Wednesday morning. "The one thing holding up the entire budget is the Assembly majority refuses to concede to bail reform changes. I cannot predict whether it will be in the budget or not.

The Legislature is passing a budget while adhering to social distancing guidelines.  "We're doing our briefings by Zoom," said Morinello. "Only those who are debating the bills are on the floor. We are watching from our offices. If we are voting "yes" we don't have to do anything. If you want to vote "no", you have to physically go to the chamber and express your negative vote," he said. "This stifles the ability for true debate and discussion on issues."

The governor has suggested lawmakers could pass a budget that slashes state spending for now and gives his administration the authority to increase spending later, as federal aid arrives. Democrats and Republicans have spoken in support of expanding Cuomo’s authority on the budget amid the public health emergency.

Cuomo said in a Tuesday radio appearance that it would be “deceptive” for New York to pass a budget that papers over the need for big cuts to school aid and other spending as unemployment claims mount. “This truth is an ugly and painful truth,” he said.

At stake is an April 1 deadline to pass a state budget — a target that was once ignored in Albany but that Cuomo has prided himself on often meeting since he came into office in 2011. Lawmakers also need to ensure state agencies at a minimum can pay workers.

At a news conference Tuesday, Cuomo said the biggest question is how much federal funding will arrive to offset the cost of the outbreak, which has killed over 1,200 people statewide. His budget director said the state comptroller has the legal authority to pay state workers.

“It’s either coming or it’s not coming. We are where we are. The numbers are where the numbers are,” he said. “The federal government says they’re going to provide funding.”

Congress is sending New York at least $5 billion for virus response costs, but Cuomo argues federal funding isn’t enough, given the outbreak’s outsize effect on the state. And he said Tuesday he isn’t counting on Congress’s efforts to deliver more.

There is some agreement among Democrats and Republicans that the need to nimbly manage the crisis justifies expanding Cuomo’s budgetary and disaster response authority.

Senate Leader Andrea Stewart-Cousins, a Democrat, said in a recent radio interview that she would never support giving the executive branch “wide latitude” over certain budget decisions without legislative involvement. Assembly Minority Leader Will Barclay, a Republican, wants Cuomo to at least report spending decisions to the legislature.

The uncertainty and need for swift state action mean that a notoriously opaque budget process negotiated behind closed doors by the governor, Senate leader and Assembly speaker has only grown more secretive even as the stakes grow higher for New Yorkers who face cuts to schools and health care on top of economic woes.

“They have cloaked this as thoroughly as I’ve ever seen in 30 or 40 years. Nobody has any idea what’s going on,’ said E.J. McMahon, research director for the Empire Center, a fiscally conservative think tank.

As the Wednesday deadline approaches, Cuomo and legislative leaders have given few details about what a potential three-way deal will look like on the governor’s proposed $178 billion budget, which would raise state spending by 2%. The Assembly and House declined this month to release their own policy and spending proposals, which have traditionally given the public a sense of lawmakers’ stances before budget negotiations ramp up.

That means it’s still unclear just how New York will close a budget hole that includes billions in lost tax revenues as the state shuttered businesses to reduce the virus’s spread. The response to the virus already has cost the state $1 billion, Cuomo said.

Many issues can wait until the the federal government declares the outbreak over, Cuomo’s budget director, Robert Mujica, said. That could include some Cuomo-led efforts to trim $2.5 billion in ballooning Medicaid costs, which he launched before the outbreak.

“Priority No. 1 is dealing with the pandemic, but we also have to do a balanced budget,” Mujica said.

It also remains to be seen whether the budget will include a host of new laws Cuomo has called for, including paid gestational surrogacy, a ban on plastic foam containers, gun control measures and efforts to make it easier to site renewable energy projects. Cuomo said Tuesday that the budget likely won’t legalize recreational marijuana sales.