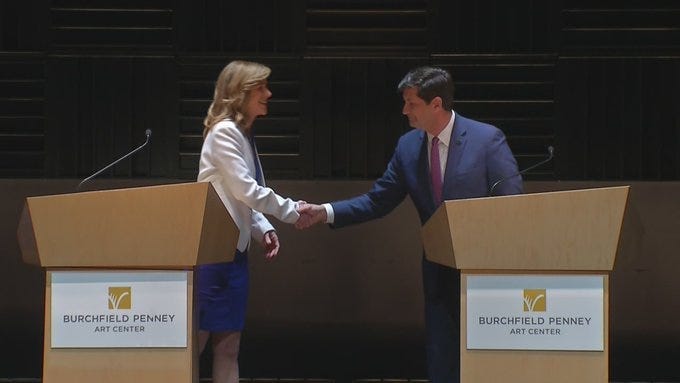 Buffalo, N.Y. (WBEN) - In a televised debate Wednesday night on WIVB, the two candidates for Erie County Executive answered questions and challened one another on issues including taxes, road conditions, a new stadium and their campaign advertising.

There were no knock-out punches in the hour-long session that was held at the Burchfield Penney Art Center featuring incumbant Democrat Mark Poloncarz and Independent challenger Lynne Dixon.

“Your taxes have gone up, my taxes have gone up", said Dixon as Poloncarz addressed a question about property taxes in the county.  "I’m proud to say we’ve reduced the tax rate", stated Poloncarz who later admitted that actual tax bills may be higher due to property assessments which he pointed out he does not control.

The responses were somewhat emotional as Poloncarz and Dixon responded to a question about former Poloncarz' Social Services Commissioner Al Dirschberger who was found guilty of rape.  Poloncarz claimed policies were in place to safeguard against such actions while Dixon said she has pushed for stronger safeguards and policies during her time as and Erie County Legislator.

WBEN will host each of the candidates in-studio for one full hour Monday and Tuesday as Poloncarz and Dixon will go in-depth and respond to questions from Susan Rose and Brian Mazurowski.