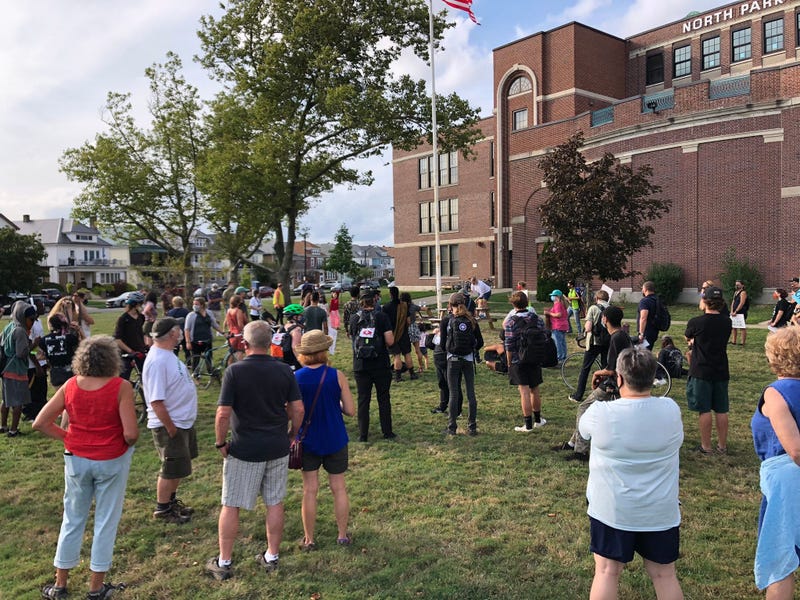 September 1, 2020 09/01/2020 11:40 pm
BUFFALO (WBEN) - On Tuesday evening, numerous protesters gathered for a rally at the corner of Tacoma and Parkside, right in front of the North Park Community School.

Dozens of protestors gathering at the corner of Tacoma & Parkside in response to the racist incident that occurred during the Black Lives Matter march on Hertel. A brief march is expected to take place after the rally. @NewsRadio930 pic.twitter.com/gI4M6mXFFs

And the march has begun down Parkside. Demonstrators making their way to Hertel. @NewsRadio930 pic.twitter.com/mR32NJvmw6

"It just shows the white privilege that this man was able to have a knife in his hand in broad daylight against protesters exercising their American right and for police not to do anything," said Darien Chandler, one of the leaders of the WNY Liberation Collective who also attended Friday night's march on Hertel. "A man just got shot seven times in Wisconsin for having a knife in his car - this man had a knife in hand.

"This shows that police do not prevent crimes," Chandler continued. "If these guys would have harmed us, would have stabbed us or sliced somebody...they would have came after the fact, so we had to do what we had to do as peaceful protesters and citizens, and we did our best."

The demonstrators are calling on local officials including the Buffalo Common Council, District Attorney John Flynn, the Buffalo Police Department and Mayor Byron Brown to take action that will ensure the safety of future protesters.

As the Tuesday rally took to the streets to march toward Hertel, there were some very intense moments, as a confrontation took place between protesters and patrons of MT Pockets.

“Go back to the East Side.” “Get a job.” N-word “lover.” (They said the real word; I will not) “Suck a black d—-.” “Night rider.” “You’re a traitor and a piece of shit.”These are some of the things people on the patio at MT Pockets yelled to protestors pic.twitter.com/HV2fD6bmkQ