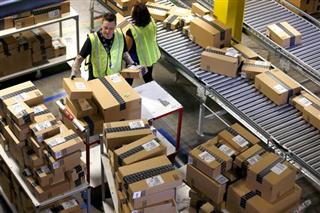 Lockport, NY (WBEN) While Grand Island is out of the running for an Amazon distribution center, WNY may still have a shot. Leaders in Orleans and Niagara Counties say there is great interest in bringing Amazon there.

"Huge, just like the car commercial, huge," says Lynne Johnson, chairwoman of the Orleans County Board of Supervisors. "We are ready for Amazon to come here. We are a rural community that's 100 percent business oriented." She says there won't be opposition, which was seen in Grand Island. "This means jobs for residents, in a time when our unemployment is higher than normal. We would roll out the red carpet to bring Amazon to Orleans County."

Richard Andres of the Niagara County Legislature says there's interest in his county as well. "We have in Niagara County a very business-friendly environment which matches what they're trying to accomplish and we feel we have a very strong case to make" for Amazon, believes Andres. He says Niagara County was trying to take a shot at HQ2 last year. "We had a good pitch that we didn't get a chance to do because we didn't get that far in the process but we did look around and sharpen our tools and put down what our assets are, and it was a good exercise even though it wasn't a successful attempt," says Andres.

Andres says Niagara County has strong infrastructure, and has the same attributes as Grand Island, which could make Niagara County attractive to Amazon.