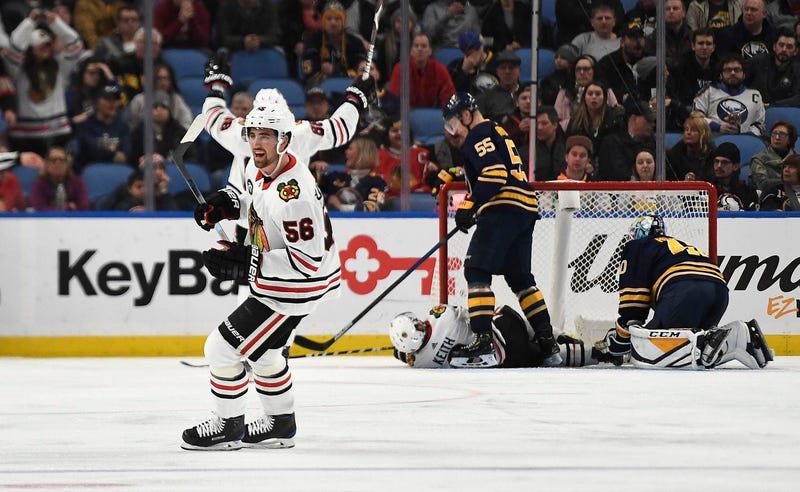 BUFFALO, N.Y. (WBEN/AP) — Patrick Kane celebrated his latest homecoming with two goals and two assists to surpass the 900-point plateau in leading the Chicago Blackhawks to a 7-3 win over the Buffalo Sabres on Friday night.

Kane capped the victory with an empty-net goal while upping his career total to 903 points, moving ahead of Tony Amonte for 12th place among U.S.-born players. Kane is from south Buffalo and extended his point streak to 10 games, in which he has combined for nine goals and 16 assists.

Connor Murphy sealed the victory by converting Kane's pass into the middle and snapping in a 30-footer through a screen to put Chicago up 5-3 with 8:36 remaining.

Jason Pominville and Kyle Okposo scored goals 3:37 apart in cutting Chicago's lead to 4-3 with 12:44 left. Jack Eichel also scored in a game the Sabres trailed 3-0 through the first 26:06 and 4-1 through two periods.

Buffalo dropped to 2-6 in its past eight and 8-14-7 since matching a franchise-best 10-game winning streak in November.

The Sabres failed to capitalize on numerous chances in the first period, and were outshooting the Blackhawks 14-6 before Caggiula scored with 1:22 left in the second period. Gustav Forsling set up the goal by intercepting Sam Reinhart's weak breakout pass attempt at the left point.

Jeff Skinner's turnover led to Erik Gustafsson setting up Kane for a breakaway goal 50 seconds into the second period. Keith, with an assist from Kane, converted his own rebound to put Chicago up 3-0 a little over four minutes later to break open the game.

The 30-year-old Kane reached the 30-goal mark for the fourth time in his 12-year career. And he continued his domination in Buffalo, where Kane has scored a point in each of his eight visits in combining for seven goals and six assists.

The Sabres gave their fans little to cheer for in opening a seven-game homestand while also playing their first game at Buffalo in nearly three weeks following a five-game road trip that spanned their bye week of and the NHL's All-Star break.