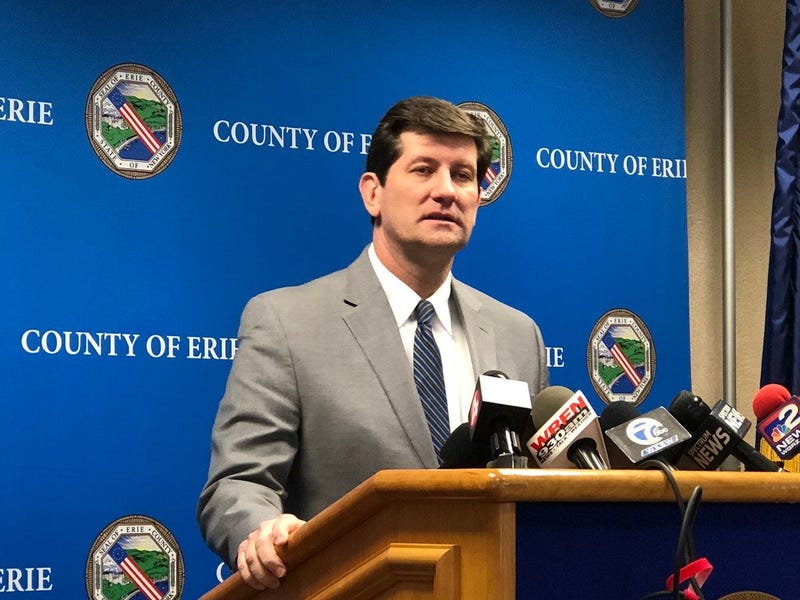 BUFFALO, N.Y. (WBEN) – Erie County Executive Mark Poloncarz said the county will not supply ventilators to New York City under the governor’s executive order because all ventilators are currently being used in Erie County.

“There is not a single person who is going to have a ventilator taken away in Erie County to send downstate," Poloncarz said. "We’re all in this together, but someone’s life downstate is no different than the life up here. We’re going to work very hard to protect life in our hospitals, whether it’s downstate or upstate, but our ventilators are not going to be taken away from use up here to go downstate.”

Governor Andrew Cuomo’s order on Friday will result in the National Guard taking 20 percent of the unused ventilators from upstate hospitals for use downstate, where there are more than 100,000 cases. Counties will get the ventilators back or be reimbursed if they don’t. However, there has already been pushback from many counties. Upstate communities worry that the peak of coronavirus could be in the coming days and weeks, meaning they may not have ventilators to help their own communities if they’re used in New York City.

“My understanding is if they have a need a St. Joe’s, because it’s now a COVID-19 hospital, and they have an extra ventilator or two at Buffalo Mercy, they would move that from Buffalo to St. Joe because there’s an eed in the community,” Poloncarz said.

The county executive said New York City still has its own ventilators.

“Why would you take (a ventilator away from someone) and put it on a truck so it can get driven eight-to-ten hours to New York City when you have another patient down the hall who can use it?” Poloncarz said. “It makes no sense. Perhaps there’s a stockhold of ventilators in the Albany area that the governor is aware of and that’s why he said that. It’s not like there’s a stockpile of ventilators in Western New York that is going to be unused or not being used because we have a legitimate COVID-19 outbreak here.”

Niagara Falls Memorial Medical Center President & CEO Joseph A. Ruffolo says;  "The Governor’s Executive Order for the removal of excess ventilators from upstate hospitals to those downstate, Niagara Falls Memorial Medical Center, the only independent hospital in Western New York, stands side-by-side with our partnering health systems in Erie County on holding onto the scarce and precious resources we have to save lives in Niagara County and surrounding areas."

As of the publishing of this article there are 802 confirmed cases of coronavirus in Erie County and more than 100 in Niagara County.

Lawmakers in Erie County plan on filing a lawsuit against the governor to stop the executive order. Minority Leader Joe Lorigo told WBEN that the governor cannot take the needed medical equipment and transfer it to New York City.

Lorigo questioned whether or not all the ventilators are being used. But he acknowledged that if they are all being used, it poses another major question over whether or not the county is capable of handling this crisis.

“He can’t say we’re doing everything we can and that people that are coming down with coronavirus that need help are going to get it and that every ventilator is being used,” Lorigo said. “We either have space to treat people or we’re already at max capacity and we need help from the governor to divert ventilators here rather than New York City.”

“We’re all in this together,” Lorigo said. “We want to help. But we have to put our residents first.”