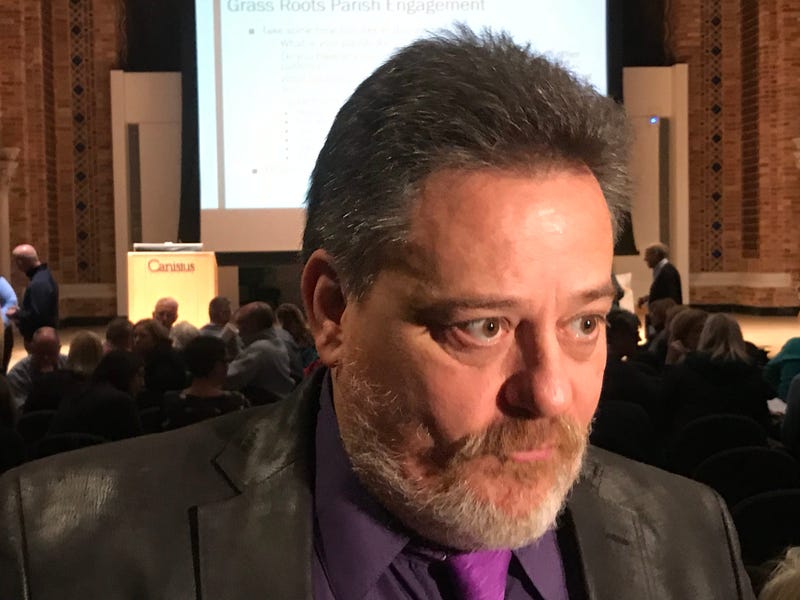 Buffalo, N.Y. (WBEN) - When Bishop Edward Scharfenberger was introduced to the Buffalo catholic community as the newly appointed apostolic administrator for the Diocese of Buffalo, he said he wanted to meet with survivors of priest abuse.  That didn't take long as survivor Michael Whalen took to the stage at the Movement to Restore Trust symposium Saturday and offered an honest assessment of the crisis, from a survivor's perspective.

As Whalen, who was seated next to Scharfenberger,  walked across the stage inside the Montante Cultural Center at Canisius College, Bishop Scherfenberger was in the front row and stood to recognize Whalen as the crowd of 175 in attendance looked on.

Whalen became real honest real fast as he began to characterize his and other survivors'  frustrations over the status quo in the diocese.  The exit of Bishop Richard Malone was a monumental and symbolic step in Whalen's opinion, but there are others who need to go, he says.  "How can the diocese heal if you still have the old guard in there doing the old playbook", said Whalen as he challenged the new leadership of the diocese to get rid of Auxiliary Bishop Michael Grosz and legal counsel Terrence Connors.

Following the session, Bishop Scharfenberger told WBEN he would make tough decisions, possibly on leadership positions, but only after advisement from others and not on any particular timeline.

Whalen is hopeful that the leadership of Scharfenberger will help navigate the way toward healing within the diocese and Catholic community in Buffalo and Western New York.  "The man truly is sincere", said Whalen of Scharfenberger.  Whalen said he spoke at length with the Bishop and added that Scharfenberger offered him a promise, saying, "We will do this together and we will change this".

The change will come with pain, acknowledges Whalen as he knows the diocese will face monumental financial pain in addition to the emotional pain already plaguing the diocese.  Whalen listened as a legal expert explained the ramifications of bankruptcy, something that is likely and acknowledged by Bishop Scharfenberger as a viable step to take.  "It was inevitable, we knew it was going to happen", said Whalen.

It's no wonder Whalen received a standing ovation when he left the podium and walked back to his seat next to Bishop Scharfenberger after he openly and publicly announced his forgiveness of the priest who ultimately admitted to abusing Whalen.  Standing before the dozens of Catholic faithful inside the Montante Cultural Center, Whalen proclaimed, "I forgive you Norbert Orsolits". Whalen told WBEN after the session that those words don't come easy but are sincere.  "God tells you to forgive, so I forgive him", Whalen said.

"I never lost my faith", said Michael Whalen.  That faith will continue to be tested as Bishop Scharfenberger takes some time to determine the next steps he'll take to guide the diocese and catholic community toward healing.

music
Bagel Bites is losing it and loving Ariana Grande so hard, the singer took notice
music
These are the scariest movies most likely to raise your heart rate
music
Kane Brown wishes happy birthday to his 'angel' daughter on first birthday
sports
Kirk Herbstreit is interested in calling NFL and NCAAF
news
Pa. National Guard arrives in Philadelphia amid Wallace unrest
news
Experts and parents call for an end to daylight saving time amid COVID-19