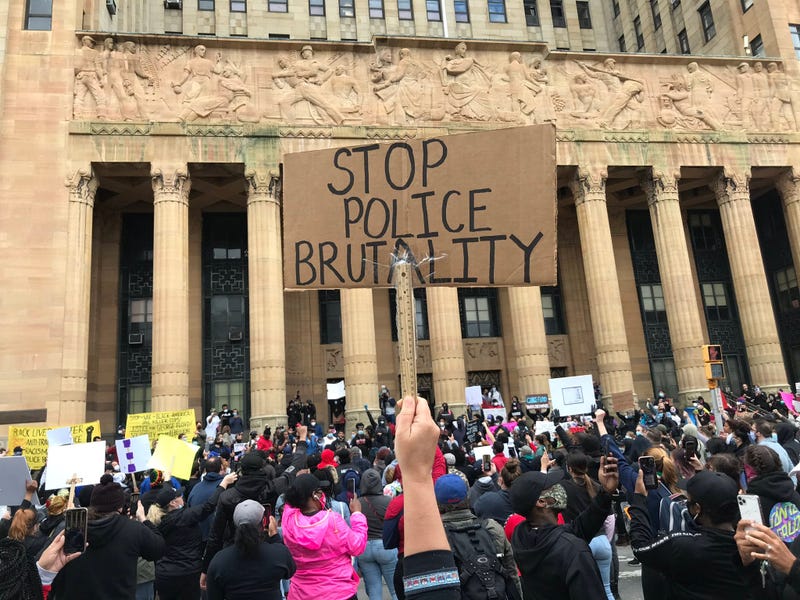 BREAKING: A State of Emergency has been issued for Erie County due to protests. A countywide curfew is in effect from 10:30pm Saturday thru 7am Sunday.

Buffalo, N.Y. (WBEN) - "We're disheartened about the situation," said Erie County Executive Mark Poloncarz. He and Buffalo Mayor Byron Brown held a late night news conference Saturday to announce a State of Emergency has been declared and a countywide curfew is in effect until 7am Sunday.

The actions are the result of a night of rioting, looting and vandalism in the city of Buffalo.  Police were using tear gas, rubber bullets and flash bangs to quell protestors.

Demonstrators began with a moment of silence, fists in the air, remaining in place for eight minutes, representing the time a police officer pressured the neck of Floyd before his death in Minneapolis.

After a brief speaking program, demonstrators were encourged to leave peacefully and they began a noisy march up Delaware Avenue as a show of force.

“No justice, no peace!” Scenes from a passionate #BlackLivesMatter protest in downtown #Buffalo. pic.twitter.com/ShBRyiax9Q

Buffalo Police, in riot gear with shields and batons, were stationed at all the key intersections surrounding Niagara Square as well as perched high atop their headquarters building across from city hall.  Erie County Sheriff's Air One helicopter was flying overhead as demonstrators made their way through downtown and Allentown and SWAT officers could be seen in full gear along Delaware Avenue.

About 90 minutes into the protest, the crowd turned angry. Some of the demonstrators started to charge the Robert Jackson Federal Courthouse. Others were breaking windows at Statler City. Police stood shoulder to shoulder wearing gas masks and carrying batons. Protestors were throwing rocks and water bottles at officers.

A vehicle that was traveling Southbound on Delaware Ave became the next target. Protestors pulled the driver out of the car, jumped on the car, smashed the windshield and destroyed it. The driver was injured according to witnesses. That's when police moved in with tear gas.

Chaos in Buffalo on Delaware as a car tried to go through protesters. This is getting ugly. @NewsRadio930 pic.twitter.com/T1MHn8fN8g

Vicki Ross, Executive Director of the WNY Peace Center, told WBEN's Tim Wenger at Niagara Square, that there were infiltrators in the crowd who wanted to spark violence.

One moment that will be remembered for being a turning point was shortly before dark. An unidentified African-American woman got on a bullhorn in front of the crowd and said "No good is going to come of this, let's continue our march."  She is credited with de-escalating the situation.

In a Saturday evening news conference heard LIVE on WBEN, Buffalo Mayor Byron Brown said law enforcement showed tremendous professionalism. The Mayor said the majority of those at the protest were peaceful. He said outside agitators were responsible for bringing chaos to the event.

Both leaders said they had been in touch with Governor Cuomo's office and were offered assistance to restore order. Mayor Brown said at this point State Police are coming in. If need be,  the National Guard could be called in.

As of late Saturday night, officials said arrests ranged between 5 and 10 people.

"I love this city passionately," said Mayor Brown. "I'm glad that the National Association of Chiefs of Police have stepped up and condemned the officers' actions in the death of George Floyd in Minneapolis. People in Minneapolis and Buffalo and Erie County are hurting. Violence is not the answer. Constructive dialogue is the answer.  We are proud of those who came to peacefully protest their anger, but not of those who came here looking to create violence, mayhem and destruction." He said work is underway to identify those individuals.

Tensions remained heated after dark.  Protestors damaged a law enforcement van in the parking lot of a 7-Eleven store on Niagara Street.

Tensions still incredibly high near the 7-eleven on Niagara St. Protestors destroyed a police vehicle about 75 yards away. @NewsRadio930 pic.twitter.com/r2TeeKwnH5

Seven hours into the protest, after 11pm, things escalated again when a bail bonds van was set ablaze in Niagara Square. At that point about a hundred protestors were still verbally challenging police. WBEN's Tim Wenger described it on the air as something you see in other cities. Moments later a protestor threw a flaming object through a window at city hall.

In Niagara Square in #Buffalo. pic.twitter.com/vx0qCMVZtI

Mayor Brown, during the overnight briefing, called out the "idiot" who threw a burning object inside city hall to ignite the building on fire"  "We have you on camera you idiot", stated an emotional Mayor Brown.

Earlier in the day, the mayor had warned there may be opposition to the demonstrators and had a message for the community in advance of the demonstration.

A state of emergency for all of Erie County was declared late Saturday and a curfew was imposed until 7am Sunday.  County Executive Poloncarz said a curfew for Sunday would be assessed at some point during the day.