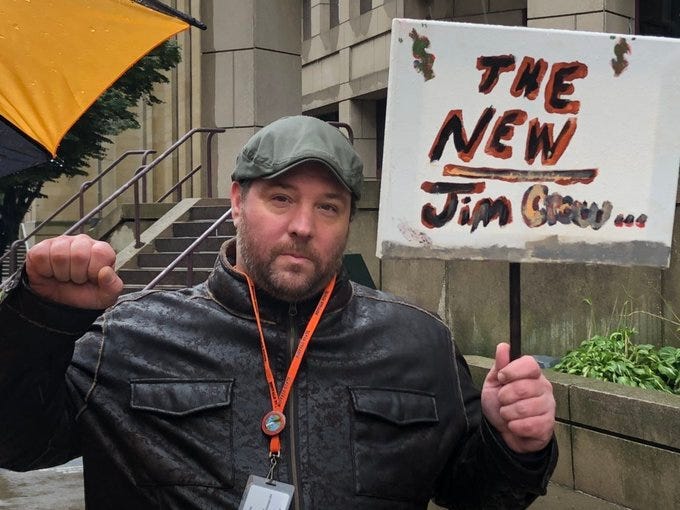 BUFFALO (WBEN) - Last week, 34-year-old Robert Ingalsbe, Jr. died after an attempted suicide within the Erie County Holding Center. Ingalsbe was rushed to the hospital after he was briefly revived, but he eventually succumbed to his injuries.

This incident marks the fourth death of a county inmate in the last three months, and Erie County Legislator April Baskin says there have been 31 deaths since Tim Howard became sheriff in 2005. In Baskin's rather relatively short tenure as legislator, she has gone toe-to-toe with Howard on several issues relating to jail conditions and the need for body cameras, and she provided a response following Ingalsbe's death:

Four deaths in less than three months is an obscenity. The death of Robert Ingalsbe is further proof that Sheriff Howard is incapable of managing Erie County’s jail operations.
There have been 31 deaths in Erie County’s jails since Timothy Howard became Sheriff in 2005. These deaths are a stain on our community, and a burden to taxpayers. Three of the most recent deaths have involved the medical unit at the Holding Center. The legislature cannot stand by while these deaths mount. I am requesting that Sheriff Howard, the head physician of Correctional Health and Erie County Mental Health Commissioner Michael Ranney attend the next meeting of the Legislature’s Public Safety Committee to discuss medical protocols, particularly those relating to suicide and drug withdrawal.
The legislature has previously committed significant funding to the prevention and treatment of opioid abuse, including funds for the Sheriff’s Office. We need to understand how Sheriff Howard’s leadership has impacted the implementation of these programs and what steps can be taken to overhaul medical treatment for prisoners.
In addition, the 2020 budget process is underway, and I will examine the Sheriff’s requested budget to see what resources he is seeking to help detainees going through withdrawal from substance dependency.
When I asked for a breakdown of expenditures from Correctional Health at a Public Safety Committee Meeting two weeks ago, the Minority Leader accused me of holding “animosity” against Jail Management. I have no personal animosity towards the Sheriff. But when we consider the 31 deaths that have occurred on his watch, it is clear that the legislature must provide stronger oversight.
On Wednesday afternoon, about 20 people gathered outside the Holding Center to protest the treatment of inmates and call for the removal of Howard.

People gathering outside the Erie County Holding Center this afternoon to protest the latest death of an inmate, and they’re calling for the removal of Sheriff Howard. @NewsRadio930 pic.twitter.com/XxRnl709mU

Monica Lynch was at the protest to share the story of her brother, Connell Burrell, another inmate who died earlier this year.

"It saddened me to see that two more people have died in the last two-and-a-half months after him - no change has happened," Lynch began. "We have a lot of publicity, but they still haven't take it serious enough to walk into this holding center and demand changes. Sheriff Howard is just running this jail to the ground."

Michael Mottern is another advocate of better jail conditions, and he had some pretty strong words for Howard.

"My message is that enough is enough - we need to fire Sheriff Howard - the state government, and specifically the Oval Office in the Governor's Chamber needs to get rid of Sheriff Howard," he said. "This is not for the purpose of incarceration; this jail is here for the purpose of detention only so that people can show up to trial and get their fair trial...It's not here to punish people; it's not here to get a vendetta against people, and it's not here to say, 'Well, you got yourself in here, so we're going to treat you the way we want to treat you in a racist manner."

The Erie County Legislature has taken steps this year to provide additional oversight to the Sheriff's Office, including the creation of the Corrections Specialist Advisory Board, but both Lynch and Mottern don't believe the provisions go far enough.

"Yes, there does need to be more action taken both on the county level and the state level of government," said Mottern. "You know, I've been in here before - it wasn't a pretty sight. I got my day in court. The India Cummings crisis was criminalized, and this is just wrong on every level."