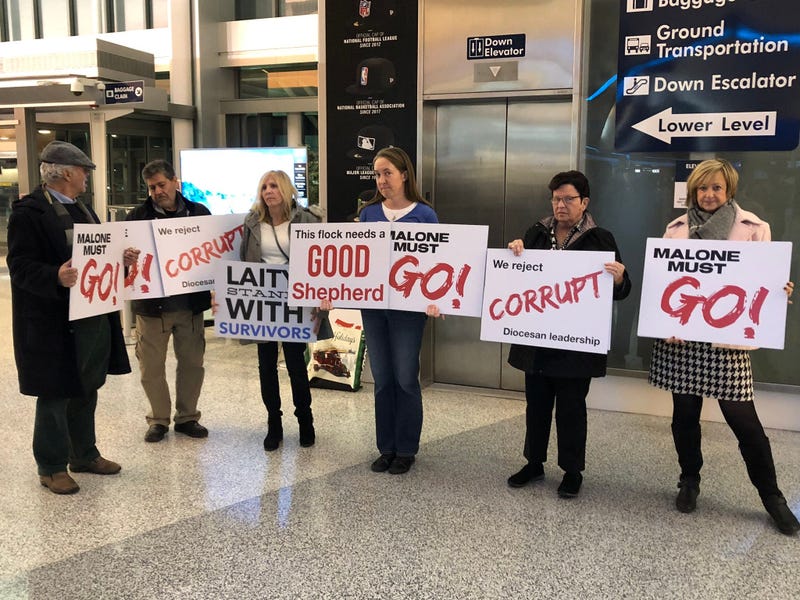 BUFFALO (WBEN) - Last week, Bishop Richard Malone flew to the Vatican for an "ad limina" visit, in which he met with all of the bishops of New York State, as well as Pope Francis.

During the week, there was a report out of Rome that Malone's resignation was "imminent."

NEW: Hearing from reliable sources that Bishop Richard Malone’s resignation is imminent @BuffaloDioceseThe apostolic visitation into the troubled diocese has been completed by Bishop DiMarzioBishop Malone is under fire for mishandling sexual abuse in his diocese

Malone later denied that report, and there has been not further word on a resignation announcement to this point.

On Sunday evening, protesters and media gathered at the Buffalo Niagara International Airport, as Malone's flight into Buffalo was scheduled to arrive.

A small contingent of protesters gathering at the airport in anticipation of Bishop Malone’s arrival. Malone is coming back from the Vatican, where reports surfaced that his resignation as leader of the Buffalo Diocese is imminent. He denied the report. @NewsRadio930 pic.twitter.com/UQhNAHbq3S

However, Malone was somehow able to completely avoid media and protesters.

"I'm not really surprised - I guess I'm just getting used to disappointment," said Siobhan O'Connor, Malone's former executive assistant who is now one of the faces of the movement to have the bishop removed from his role of leadership within the Buffalo Diocese. "We were here for Bishop Malone to see us, and however he wrangled out of it, he wasn't here to see us."

"Obviously he's not leading his flock because leaders don't hide, and he's hiding," said Farrell. "He's not available, he's not out there, and I think that says it all right there."

Mary Ellen Sanfilippo, like O'Connor, wasn't the least bit surprised either. She also responded to the whirlwind of a week that doesn't appear to be ending in the resignation that many had hoped for.

"I, personally, did not anticipate that he was going to be resigning at all," she said. "Unless I hear an official report of that, I'm not going to get my hopes up, and we're just going to continue to do what we do. He's not leaving, we're not leaving."